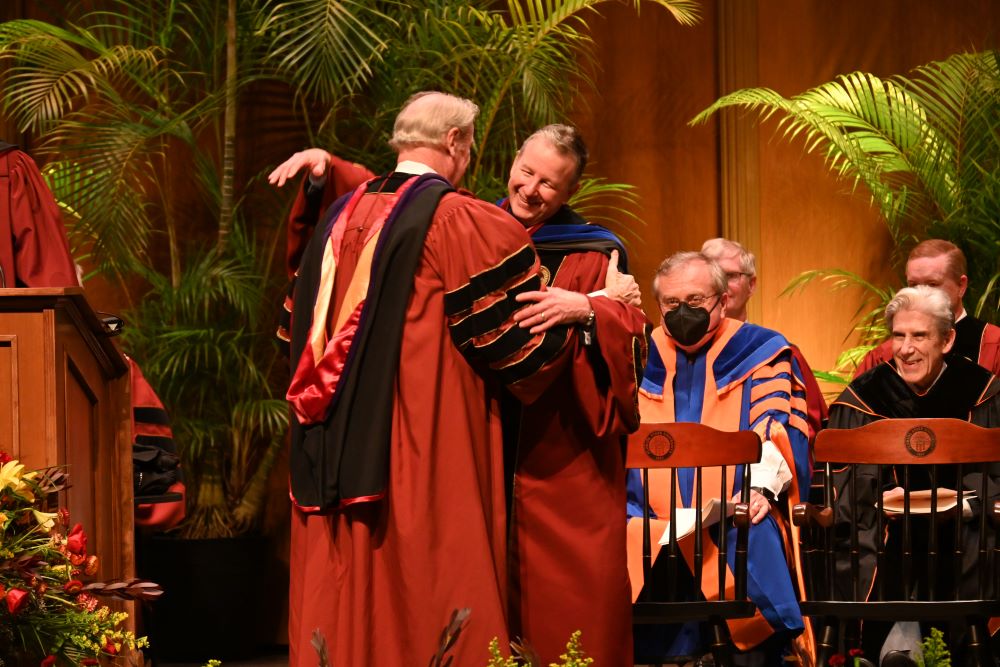 McCullough became the university’s 16th president on Aug. 16, 2021. Before coming to FSU, he spent decades in faculty and leadership at some of the nation’s most prestigious universities, created two companies and held multiple patents.

He was previously vice provost for research at Harvard University starting in 2012. Before that, he spent 22 years at Carnegie Mellon, where he began as an assistant professor in chemistry and eventually became the university’s vice president of research.

His ceremony was attended by FSU leadership, officials overseeing the State’s University system, and an audience full of people connected to the garnet and gold. Tallahassee Mayor John Dailey, City Commissioners Curtis Richardson and Dianne Williams-Cox, and County Commissioners Bill Proctor and Carolyn Cummings — who all voted in favor of a $27 million Blueprint allocation to the university Thursday — also were in attendance.

Marshall Criser, chancellor of the State University System of Florida, said they could not have picked a better person to be FSU’s next president. He said during the interview process, McCullough’s belief in the university and its ability to reach higher goals, like joining the Association of American Universities.

“Rick said FSU is ready, we just have to get our message out there,” Criser said. “We are behind you, we are ready, and go Noles.”

Bacow said the role of a university president is a vital one to our society, because he believes it is central to our democracy.

“Meaning, passion, purpose: A good education kindles them, a great education stokes them,” Bacow said. “He will take up that cause for as long as he is president of Florida State University.”

He also gifted McCullough a pen made from wood from a red oak tree on Harvard’s campus.

“May it inspire you as you write the next chapter in this community of scholars,” Bacow said.

Before McCullough received the ceremonial FSU President’s Medallion, three students lit the university’s three torches. One of the students was Beata Olsson, a member of FSU’s Women’s soccer team that won a national championship last season.

During his remarks, McCullough talked about how he was a first-generation college student and how mentors in higher education helped him reach where he is today. He said helping students achieve their highest potential is FSU’s goal.

“Public universities are powerful drivers of social mobility,” McCullough said. “We at Florida State have a higher calling to give every student a fighting chance.”

He said he hopes to lift the university into the top 15 of the public university rankings and chase the Top 10 during his tenure.

“I know working together we will achieve our unbounded goals,” he said.

Earlier in the day, McCullough hosted a panel discussion with faculty leaders at FSU and his previous career stops about the future of higher education in America.

The education professionals discussed breakthroughs in biological science that allowed the COVID-19 vaccine to get developed quickly; the future of A.I. in diagnosing medical issues and solving scientific problems; and the importance of the humanities for communicating those developments, strengthening problem-solving skills and developing interdisciplinary fields of study to further push society forward.

Garber said the speed in which the mRNA vaccine was developed was built on the backs of scientists giving their lives to research.

“These are overnight sensations that took over a decade of research to build up,” he said.

Thorp said the speed in which COVID-19 vaccines were developed is a sign of how far science has progressed, but that the failure of science communicators to fight back quickly against misinformation is a sign that social sciences and humanities are just as important for solving medical issues as the medical solutions themselves.

“The people at the bench did an awesome job,” Thorp said. “But the social science of the pandemic, we basically blew all of it.”

He said the lack of foresight that the pandemic would be turned into a political issue and how to effectively communicate the effectiveness of masks is a sign that multidisciplinary approaches to issues like the pandemic need to be pursued.

“We were really good with our pipettes but not very good at understanding the psychology of what was going to happen,” he said.

Kamlet joked that areas of social sciences are more difficult than biological sciences because of their subjects of study.

“Studying social sciences is like studying an atom and every molecule has its own opinion,” he said.

Fulkerson argued that sometimes too much of a focus in higher education can be on preparing a student for their first job and not the rest of their lives.

“We tend to think we are preparing our students for their first jobs. I think that is a mistake. We need to be preparing them for their 7th or 8th job,” she said. “Parents want majors that sound like jobs, and I don’t blame them, but that is a little short-sighted.”

nextBlake Dowling: Shields Up — the Russians are coming