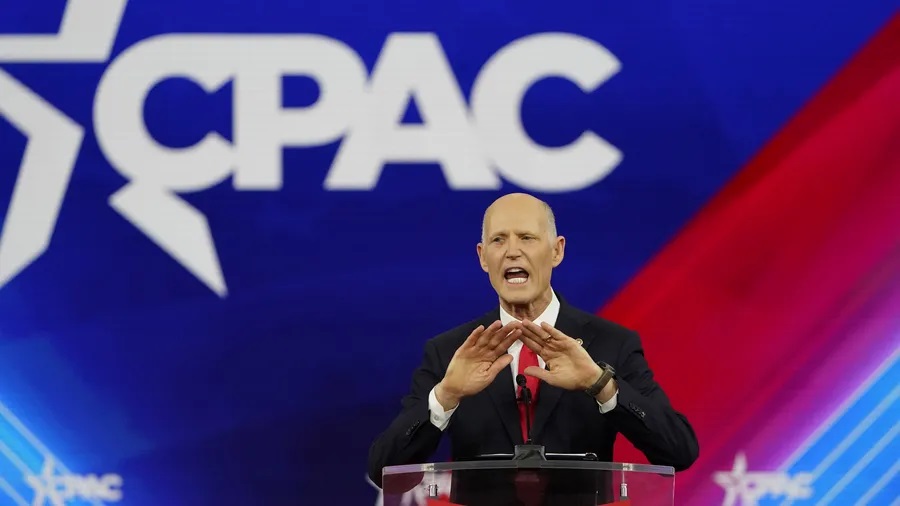 As Governor of Florida, Scott never displayed much in the way of brains.

Why does Rick Scott hate America?

Last week he lurched out of wherever he’s been sulking and presented an 11-point action plan so reactionary, so dangerously stupid, so antithetical to American values, Vladimir Putin should write him a thank-you note.

Florida’s junior Senator proposes to take us back to the 1950s, that glorious era when Black people were beaten and arrested for trying to vote, when women of all colors were expected to stay home and raise the children, when Christianity dominated the culture, when gay people had to stay in the closet, and we lived in mortal terror of socialism.

Now we’re just terrified of Russia (not quite the same thing), except in the Stalinist wing of the Republican Party, with Sen. Josh Hawley wanting to bar Ukraine from ever joining NATO, Donald Trump calling Putin’s invasion of a democratic nation “genius,” and Tucker Carlson proclaiming he’s rooting for Russia — though, to be fair, he has since walked that back an inch or two.

Scott’s full of bright ideas. Raising taxes, anyone? “All Americans should pay some income tax to have skin in the game, even if a small amount.”

He means the elderly, the working poor, people struggling — unlike him — to make a living.

Other Republicans, who prefer to keep their godawful plans to trash America under wraps, were not impressed. One Republican strategist said, “Tax increases — our voters don’t dig tax increases.”

Under Trump, guys like Scott got a huge tax cut, but that’s different. He’s rich. And amoral. His company had to pay $2 billion in fines for bilking Medicare and Medicaid, but he pleaded the Fifth Amendment 75 times, avoided criminal charges, and walked away with a nice little payout.

In the Republican Party, that translates into being a good businessman.

In the New Dawn of Crazy, the gubmint won’t be able to interfere so much with American oligarchs’ ability to rape and pillage. Scott also wants to cut the IRS workforce by 50%.

But most of Scott’s hateful roadmap to hell frantically pushes Culture War buttons.

Children will “say the Pledge of Allegiance, stand for the National Anthem, and honor the American Flag.”

Prayer will be back in schools, but teaching anything that might hurt white people’s feelings (you know: Native American genocide, the brutalities of slavery, the denial of full citizenship to women, Asians, and Blacks), the betrayal of democracy in Reconstruction, our imperial ventures in Latin America, Vietnam, and Iraq) will be verboten.

Police will be sacrosanct, even if they go around shooting unarmed folks: “We will bring back respect for people who put their lives on the line to keep us safe” — unless, of course, the “us” to which refers happen to be Black, Latino, or demonstrating in favor of equal justice under the law.

And as if that’s not backward enough for you, Scott goes on to declare, “The nuclear family is crucial to civilization, it is God’s design for humanity, and it must be protected and celebrated.”

As Governor of Florida, Scott never displayed much in the way of brains. He screwed up the state’s unemployment system, he was hostile to higher education (all that dang thinking!), he cost taxpayers nearly $1 million defending unconstitutional laws, and got rid of the dog he briefly “adopted” to show he’s a “regular guy” because the dog (named “Reagan”) acted like, well, a dog.

If Scott ever cracked a book, he might discover that the “nuclear family” is a relatively recent invention, “designed” by a changing economy 200 years ago.

And as for God, well, the Bible suggests the Almighty has a history of embracing some pretty dubious domestic arrangements. King Solomon had 700 wives and concubines. Jacob was sleeping with four women — two wives and their two servants — and having kids with all of them.

Why did Rick Scott feel the need to inflict this absurd, paranoid, hysterical (and I don’t mean funny) manifesto upon us?

Why does your toddler throw his oatmeal at the wall?

Ron DeSantis is the new White Nationalist star, Trumpier-than-Trump, hogging the good airtime on Fox “News.” He doesn’t even pretend to have policies that might address Florida’s actual problems, just attacks Democrats, scientists, teachers, gay people, and anyone else who looks at him crossways.

Scott and DeSantis despise each other. Florida’s Second Worst governor made it clear before the inauguration in 2019 that he can’t stand the guy who now holds the title of Absolutely the Worst governor.

They are also rivals for the 2024 Republican presidential nomination, along with Florida’s other senator, the Good Book-tweeting Marcocito Rubio, the General Jack D. Ripper acolytes Missouri Sen. Josh Hawley, Texas Sen. Ted Cruz, and former Secretary of State Mike Pompeo, and, of course, the criminal Trump himself who, if he runs, will probably see off the rest of the psychopaths.

But that doesn’t mean Rick Scott won’t be in there giving it the old Healthcare Fraud try, and he might able to convince some of the more mentally-unstable white people into supporting him.

His “Rescue America” plan is illustrated with glossy photos of the Constitution up in flames and a crumpled flag, and it parrots the MAGA delusion that Democrats somehow sabotage elections with their nefarious schemes to get more people to cast ballots: “In true Orwellian fashion, Democrats refer to their election rigging plans as ‘voting rights.’” Maybe that’s because Democrats believe in voting rights?

But then, Democrats (on the whole) also believe in tolerance, decency, and, most of all, reality.

Put simply, Rick Scott is an idiot, and this document proves it: “Humans are born male and female, there are two genders, and to deny that is to deny science”; “abortion stops a beating heart. To say otherwise is to deny science”; and “We will secure our border, finish the wall, and name it President Donald Trump.”

What he wants for this country is unconstitutional (school prayer? enforced patriotism?), irrational, hateful, and dangerous. It would be merely ridiculous if so many in his party didn’t believe so fervently dragging America back to when white men ruled. You would think that as we witness the overthrow of a fairly elected government in Ukraine because the despot next door dislikes how it came out, Republicans could connect the dots and see how their authoritarianism could destroy us all.

But this is the party of Jan. 6, the party of Donald Trump. Rick Scott knows that if he is to have a chance against the likes of Ron DeSantis, he will have to out-fascist him.

It won’t be easy.