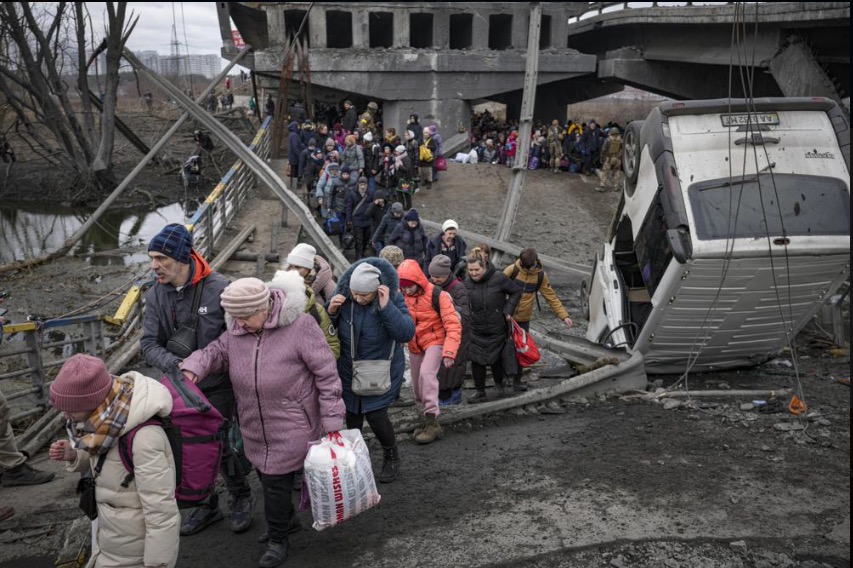 Evacuations underway Sunday from the port city of Mariupol.

Plans to evacuate civilians from a besieged port city in Ukraine failed to materialize Sunday for the second time along with an expected Russian ceasefire, a Ukrainian official said, as officials tried to persuade Russia to agree on establishing other evacuation routes near Ukraine’s capital.

Residents expected to leave the port city of Mariupol during a 10 a.m. to 9 p.m. local ceasefire, Ukrainian military authorities said earlier in the day. Interior Ministry adviser Anton Gerashchenko said the planned evacuations were halted because of an ongoing assault by Russian troops.

“There can be no ‘green corridors’ because only the sick brain of the Russians decides when to start shooting and at whom,“ Gerashchenko said on Telegram.

The news dashed hopes of progress in easing, much less ending the war in Ukraine, which is now in its 11 day and has caused 1.5 million people to flee the country. The head of the U.N. refugee agency on Sunday called the exodus “the fastest-growing refugee crisis in Europe since World War II.

The presidents of Turkey and France, as well as Pope Francis, appealed to Russian President Vladimir Putin to negotiate to end the conflict.

U.S. Secretary of State Antony Blinken spent the weekend visiting NATO member nations in Eastern Europe that have seen 1.5 million refugees stream across their borders since Russia invaded Ukraine on Feb. 24. The head of the U.N. refugee agency called the exodus “the fastest-growing refugee crisis since World War II.”

Separately, Ukraine’s national security service says Russian forces fired rockets at a physics institute in the city of Kharkiv that contains nuclear material and a reactor. Russian troops already took control of the Zaporizhzhia plant in Ukraine, as well as Chernobyl, the site of the world’s worst nuclear disaster.

Ukrainian President Voldymyr Zelenskyy reiterated a request for foreign protectors to impose a no-fly zone over Ukraine. Russian President Vladimir Putin warned Saturday that Moscow would consider a third-party declaration to close Ukrainian airspace to be a hostile act, and the West so far has rebuffed Zelenskyy’s pleas, fearing a confrontation with Russia.

“The world is strong enough to close our skies,” Zelenskyy said in a video address on Sunday.

As Russian forces surrounded several Ukrainian cities and maintained a convoy outside the capital, Kyiv, Zelenskyy appeared on television Saturday night wearing what has become a habitual military green T-shirt and rallied his people to remain defiant.

“Ukrainians in all of our cities that the enemy has entered — go on the offensive!” Zelenskyy said. “You should take to the streets! You should fight! … It is necessary to go out and drive this evil out of our cities, from our land.”

After the cease-fire in Mariupol failed to hold, Russian forces intensified their shelling of the city and dropped massive bombs on residential areas of Chernihiv, a city north of Kyiv, Ukrainian officials said.

In Mariupol, bereft mothers mourned slain children, wounded soldiers were fitted with tourniquets and doctors worked by the light of their cellphones as bleakness and desperation pervaded.

Russian President Vladimir Putin continued to pin the blame for the war on the Ukrainian leadership, slamming their resistance to Russian forces.

“If they continue to do what they are doing, they are calling into question the future of Ukrainian statehood,” Putin said Saturday. “And if this happens, it will be entirely on their conscience.”

He also hit out at Western sanctions that have crippled Russia’s economy and sent the value of its currency tumbling. Meanwhile, more companies are suspending operations in Russia, including Mastercard and Visa.

“These sanctions that are being imposed, they are akin to declaring war,” he said during a televised meeting with flight attendants from Russian airline Aeroflot, which on Saturday suspended all international flights except to Belarus. “But thank God, we haven’t got there yet.”

The World Health Organization on Sunday condemned attacks on healthcare workers in Ukraine, saying it verified at least six such attacks that have killed six people and injured 11 others.

Attacks on healthcare workers are a violation of international humanitarian law, WHO Director-General Tedros Adhanom Ghebreyesus said on Twitter.

British military officials on Sunday compared Russia’s tactics in Ukraine to those used in Chechnya and Syria, where surrounded cities were pummeled with airstrikes and artillery after Russian forces faced unexpected resistance.

The strength of Ukrainian resistance continues to surprise Russian forces, and they have responded by targeting populated areas, including the cities of Kharkiv, Chernihiv and Mariupol, the U.K. Ministry of Defense said in its daily intelligence briefing.

“This is likely to represent an effort to break Ukrainian morale,” the ministry said. “Russia has used similar tactics in Chechnya in 1999 and Syria in 2016, employing both air and ground-based munitions.”

The death toll of the conflict is difficult to measure. The U.N. human rights office said at least 351 civilians have been confirmed killed, but the true number is probably much higher. Russian and Ukrainian defense officials have not provided information on their military causalities.

Ukraine’s military is vastly outmatched by Russia’s, but its professional and volunteer forces have fought back with fierce tenacity. In Kyiv, volunteers lined up Saturday to join the military.

Even in cities that have fallen, there were signs of the resistance Zelenskyy requested.

Onlookers in Chernihiv cheered as they watched a Russian military plane fall from the sky and crash, according to video released by the Ukrainian government. In Kherson, hundreds of protesters waved blue and yellow Ukrainian flags and shouted, “Go home.”

But the struggle to enforce temporary ceasefires in Mariupol and Volnovakha on Saturday showed the fragility of efforts to stop the fighting across Ukraine.

A third round of talks between Russia and Ukraine will take place Monday, according to Davyd Arakhamia, a member of the Ukrainian delegation. He gave no additional details, including where they would take place.

Previous meetings were held in Belarus. Those talks led to the ceasefire agreement that failed Saturday and was revived Sunday.

Russia has made significant advances in southern Ukraine as it seeks to block access to the Sea of Avrov. Capturing Mariupol could allow Moscow to establish a land corridor to Crimea, which Russia annexed from Ukraine in 2014 in a move that most other countries considered illegal.

Meanwhile, the head of the Chernihiv region said Russia has dropped powerful bombs on residential areas of the city of the same name, which has a population of 290,000. Vyacheslav Chaus posted a photo online of what he said was an undetonated FAB-500, a 1,100-pound (500-kilogram) bomb.

“Usually this weapon is used against military-industrial facilities and fortified structures,” Chaus said.

The West has broadly backed Ukraine, offering aid and weapon shipments and slapping Russia with vast sanctions. But no NATO troops have been sent to Ukraine, leaving Ukrainians to fight Russian troops.

“Ukraine is bleeding, but Ukraine has not fallen,” Foreign Minister Dmytro Kuleba said in a video released Saturday.

Zelensky sought to rally support from U.S. lawmakers on Saturday, speaking to more than 300 members of Congress via a video link. He pleaded for additional help, specifically fighter planes to help secure the skies over Ukraine, even as he insisted Russia was being defeated.

Russian troops were advancing on a third nuclear power plant, Zelenskyy said. They have already taken control of the Zaporizhzhia plant in Ukraine, as well as Chernobyl, the site of the world’s worst nuclear disaster.

Blinken on Sunday was in Moldova, where he pledged support for the western-leaning former Soviet republic that is coping with an influx of refugees and warily watching Russia’s moves in Ukraine.

Moldovan officials are appealing for international assistance on the refugee crisis while also seeking security assurances in the event of any Russian aggression. More than 230,000 people have fled into Moldova from Ukraine since the fighting began.

The U.N. said it would increase its humanitarian operations both inside and outside Ukraine, and the Security Council scheduled a meeting for Monday on the worsening situation.