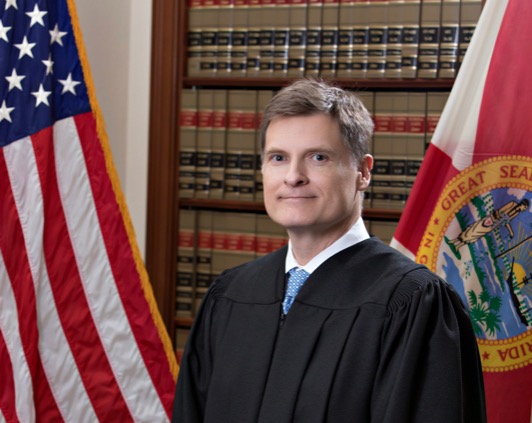 Justice Carlos Muñiz has been selected to become the next Chief Justice of the Supreme Court of Florida.

Muñiz, 52, was unanimously elected Wednesday by the seven-member high court. He will begin a two-year term as Chief Justice on July 1.

He succeeds Charles Canady, who will remain on the court as a justice after completing his third term as Chief Justice, the last two consecutively.

Muñiz — a Yale Law School graduate — was appointed to the court on Jan. 22, 2019, by Gov. Ron DeSantis. At that time, DeSantis said Muñiz’s former bosses, ex-Gov. Jeb Bush and former Attorney General Pam Bondi, had gushed about his intellectual brilliance.

“I’m grateful for the privilege of serving in this capacity, and I join my colleagues in thanking Chief Justice Canady for his outstanding leadership,” Muñiz said in a news release issued by the Supreme Court. “Our Court’s focus will remain on serving the people of our great state and supporting all the judges and staff who work with us in the judicial branch to administer justice on a daily basis.”

Before joining the court, Muñiz served in private practice and as a government attorney. That included stints as general counsel to U.S. Education Secretary Betsy DeVos; as deputy attorney general and chief of staff to Attorney General Bondi; and as deputy general counsel in the administration of Gov. Bush.

The Chief Justice serves as the administrative officer of the judicial branch and of the Supreme Court. His authority and powers include the responsibility to serve as the primary spokesperson for the judicial branch about policies of statewide import, including the management, operation, legislative agenda and budget priorities of the state’s courts.

Canady’s tenure included guiding the State Courts System during the disruption of the pandemic, taking administrative steps to assure access to courtrooms. The Supreme Court held its first remote oral arguments in May 2020, joining courts in jurisdictions throughout the state conducting remote proceedings to continue the work of the courts with the aid of technology. Administrative orders issued by Canady set forth the procedures and authorized the emergency rules allowing remote conduct of court events.

“With the commitment of my colleagues on the Supreme Court as well as judges throughout the state, I am proud of our efforts to keep the work of the courts going through this challenging time,” Canady said. “I look forward to my continued service on the Court under the leadership of my friend and colleague Justice Muñiz.”

Justice Muñiz lives in Tallahassee with his wife, Katie Muñiz, and their three children, Lydia, Robert and William.