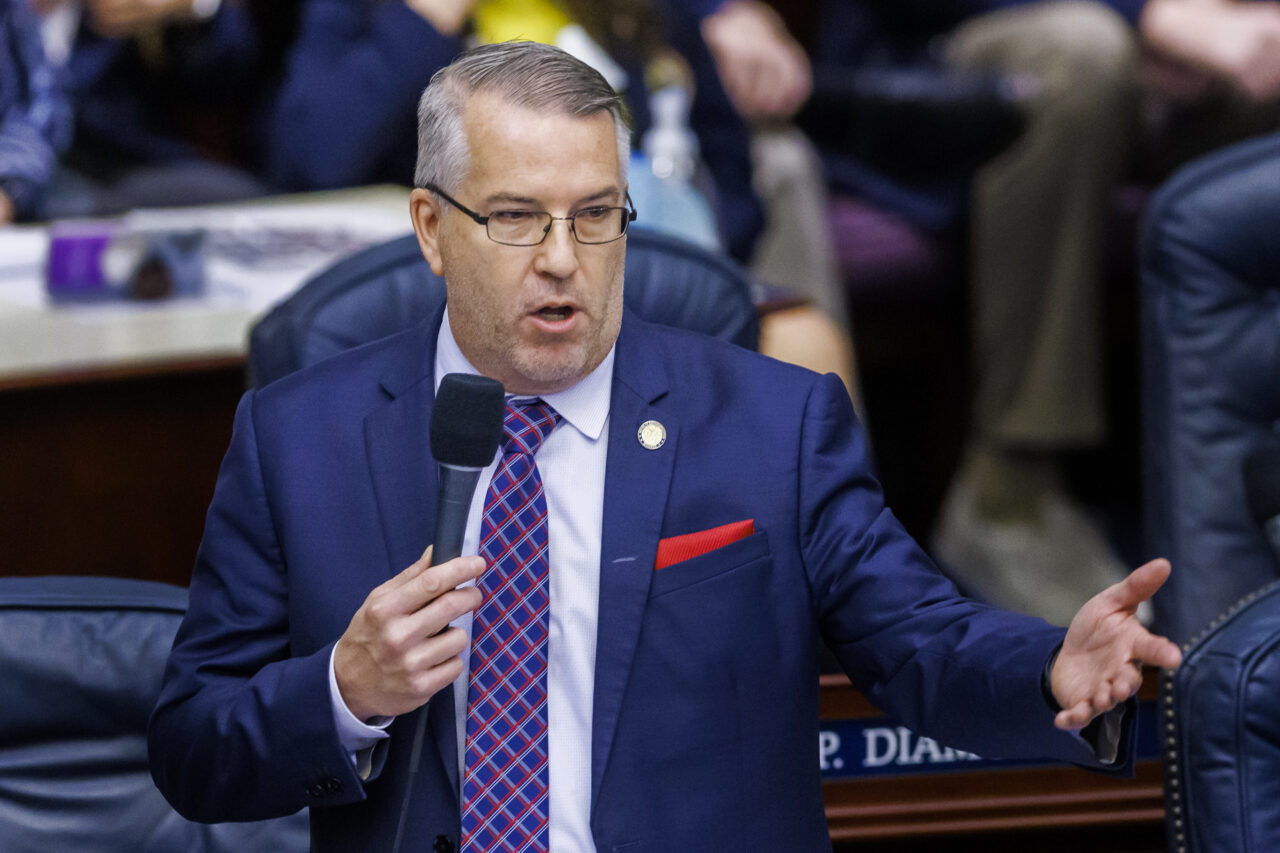 He's leaving the Legislature in November for a run at the Palm Beach County Commission.

For Democratic Rep. Matt Willhite of Wellington, the end of the 2022 Legislative Session marked another successful period of bipartisan lawmaking in which he saw through several key items.

This Session was also his last — for now — as he has set his sights on winning a Palm Beach County Commission seat in November, a move that will let him spend more time with his family.

Willhite, an active-duty firefighter, had his two teenage sons join him in Tallahassee for the end of Session. Their presence, he said, reinforced his desire to spend more time with them, his wife and their two dogs.

“I will not get this time back with them, and I don’t want to look back and say, ‘Did I miss out on something?’” he told Florida Politics. “I love local government. I was in local government for eight years, and I’ve worked for the county 26 years. I want to continue to serve in public office, but if I’m going to do that, now is the time to do it close to home.”

He’ll be able to point to strong pieces of legislation from this year to convince local voters he’ll deliver for them.

Among them: HM 63, a memorial now on its way to President Joe Biden for review urging the federal government to formally recognize and address the “epidemic of suicides” among U.S. military veterans.

“These are the heroes that serve our country who shouldn’t have to come back and feel so desperate and alone that they take their own life,” Willhite said.

The issue is personal for Willhite, a U.S. Navy veteran who in 2017 reestablished the Florida Veterans and Military Families Caucus.

Zephyrhills Republican Sen. Danny Burgess, a member of the U.S. Army Reserve, reestablished the caucus with Willhite and carried a Senate version of the memorial (SM 302) this Session.

The memorial notes some veterans experience difficulty transitioning to civilian employment “as their highly developed skills obtained in military service may not translate to high-level civilian jobs, and the resulting economic disparities, unemployment, poverty, and homelessness among veterans are shown to be risk factors for veteran suicide.”

While a recent Veterans Affairs report suggests veteran suicides are trending downward, the report cites 2019 data and does not account for newer stressors like the COVID-19 pandemic.

A prior version of the bill got snagged on a procedural issue, Willhite said. This year, it “flew right through.”

As Florida Politics reported previously, there was a drastic increase from August 2020 to 2021 in communication with the Florida Department of Veteran Affairs’ Veteran Crisis Line. The national suicide prevention hotline logged a 7% increase in calls, 40% increase in online chats and 98% uptick in texts in 2020.

More than 1.5 million veterans and active-duty service members live in Florida. In 2019, 553 Florida veterans died of suicide, the VA said.

“We, the President, Congress and the Veterans Administration need to start doing more to help these veterans find jobs and acclimate back into society, give them training and other things to help them come back,” Willhite said. “We built them up into this position and then, just as they’re done, we let them slowly fade away. That’s not what we should be doing to people who have served our country.”

One (HB 837) is a crucial measure funding and extending the life of Florida’s Hurricane Loss Mitigation Program (HLMP) and improving the safety of those who live in manufactured homes during storm season.

The HLMP, which the Legislature created in 1999, uses $10 million yearly through the tax-exempt Florida Hurricane Catastrophe Fund created after Hurricane Andrew to finance the retrofitting of facilities for use as hurricane shelters and the hardening of residences and mobile homes against hurricane-force winds. It also includes a $700,000 annual allotment to Florida International University for hurricane research

HB 837 continues funding for the program for another decade, including an additional $7 million this year from the general revenue fund Willhite said will help clear a “backlog” of projects, and allows HLMP funds used for hurricane shelter refitting to go toward the construction of new shelters.

Because of challenges in housing affordability, particularly in South Florida, many residents live in mobile homes. Some may be at risk, Willhite said, if the safety measures they have in place aren’t up to standard — a problem the program should help to rectify.

“A lot of this was done pre-Hurricane Andrew, before the building codes and standards were put in place, so (mobile home) tiedowns being used were not designed to withstand wind from hurricanes,” he said. “We want to continue to protect these people in their homes, so we should assist them, and that’s what we’ve been doing.”

Another bill, HB 459, establishes protocols that managed care plans and insurance companies must follow for programs in which there are specific sequences in which prescription drugs, medical procedures and other treatments must be used for a health condition.

Such a program is known as a “step therapy” program.

Once ratified, the bill will require companies that use step therapy programs to provide customers and health care providers information on how to request exemptions from step therapy protocols.

Companies that approve exemptions would then have to provide customers with written specifics of the prescription drug, medical procedure or course of treatment approved. In cases where companies deny exemptions from step therapy protocols, they must provide consumers with a written explanation, including the clinical rationale, behind the denial.

“When people are told ‘no,’ they want to know why. Now they can get a written response and request why their insurance companies denied that process,” Willhite said. “All I cared about in this bill was making sure patients have a say in their health care and insurance.”

Though hardly splashy in its aim, HB 459 and its Senate analogue (SB 730) by Stuart Republican Sen. Gayle Harrell attracted much attention behind the scenes. By late January, more than 110 lobbyists registered to lobby on the bill in the House, Florida Politics reported previously.

Law enforcement officers enjoy certain protections from public records requests, including having their addresses shielded from most disclosures. The information from their vehicle GPS could be just as dangerous, and possibly more so, in the wrong hands.

A police officer’s GPS data would still need to be turned over when federal, state or local governments request the information; a court approves release of the information to a person who sufficiently justifies a reason why it should be disclosed; the information is requested in a criminal, civil or administrative proceeding; or it is contained in an official report issued by a law enforcement agency.

“There are still parameters in there to allow for certain circumstances where the information could be used, but in general there’s no real need for the public to know where a police officer lives. And obviously the initial intent for protecting that personal information was to shield them from retaliation by someone they pulled over, gave a ticket to or arrested,” Willhite said. “This is just keeping up with the technology to keep them protected.”

Unless additional legislative action occurs, the measure will be automatically repealed on Oct. 2, 2027.

Further, those seeking armed guard licenses could take up to 21 hours of online training, with all remaining hours of instruction — including the firearm portion — to be done in person.

HB 1233 brings Florida in line with other states, including California and Georgia, that allow online guard training — which the state temporarily allowed during the height of the pandemic.

“It worked quite well,” Fine told a committee last month. “This would simply allow us to continue what we saw work.”

The measure would still require the Department of Agriculture and Consumer Services to ensure security schools maintain a physical location and verify an applicant completed all requisite instruction.

“These are people who are working as a janitor, a bus driver or something like that and want to go to school, become a security guard and maybe one day become a police officer, but they can’t afford to take work to sit in a classroom,” Willhite said. “With today’s technology, we have opportunities to get more things done from the comfort of our homes or a public library — something to better yourself for your family and bring more income.

“People can get a master’s degree online right now from a college. Why wouldn’t we let our security guards get some training?”

Jason Delgado and Christine Jordan Sexton of Florida Politics contributed to this report.