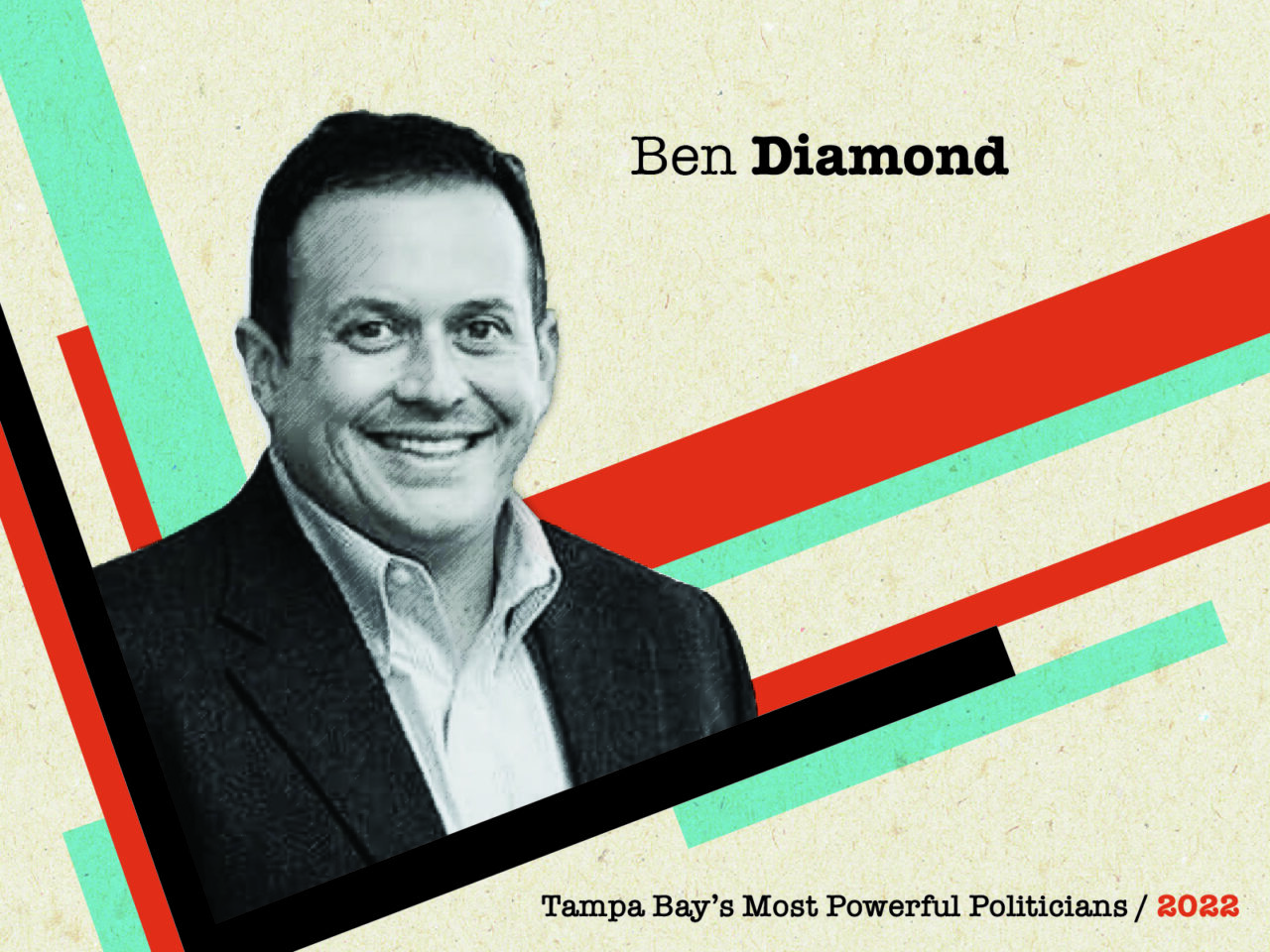 'Diamond is a true policy wonk, and that is intended as high praise.'

The good news for St. Petersburg state Rep. Ben Diamond is that he is still considered one of the most powerful politicians in Tampa Bay. The bad news is that he dropped eight spots in the rankings from last year, likely due to his departure from the Legislature and transition into a full-fledged congressional campaign.

Were he to win that race, there’s no doubt he will rocket back up the list.

Diamond, who came in at No. 15 last year after quickly advancing the ranks, was slated to become House Democratic Leader from 2022 to 2024. That changed when the St. Petersburg lawyer entered the race for Florida’s 13th Congressional District — one of the most hotly contested districts in the country.

The Democratic candidate entered the race soon after incumbent U.S. Rep. Charlie Crist announced he would not seek re-election and instead run for Governor.

Now, Diamond is full steam ahead on a congressional campaign, and he has proven a worthy competitor. In the most recent campaign finance filings, Diamond was the second-highest total fundraiser, falling second to Republican challenger Anna Paulina Luna. He had collected a total of $978,956 as of the end of 2021 and was left working to narrow Luna’s lead, with his campaign announcing it crossed the $1 million benchmark in January.

His strong financial backing shows the influence Diamond has accrued during his time in the Legislature, also serving as the Democratic Ranking Member of the House Civil Justice & Property Rights Subcommittee.

“Rep. Diamond is a true policy wonk, and that is intended as high praise. His colleagues often tease him for his massive bill binders, but they are a representation of his dedication to reading and analyzing every single bill — which is not the norm — and truly understanding the impact that each and every policy decision made by the Legislature will have on Florida families. This work ethic, combined with a penchant for bipartisan collaboration, has earned him the respect of his colleagues on both sides of the aisle,” said Ron Pierce, president of RSA Consulting.

This year, Diamond successfully sponsored legislation that tasks the Department of Veterans Affairs with providing suicide prevention training to veteran service organizations — a win for vets and their families. The Senate version of the bill (SB 1712), sponsored by Sen. Danny Burgess, cleared the Legislature with both chambers unanimously supporting the proposal.

Before making his way into politics, Diamond served as General Counsel to former Chief Financial Officer Alex Sink. He grew up in Pinellas County, received his undergraduate degree at Yale and earned his law degree from the University of Florida. Married with three young children, he currently practices law in St. Pete.

His grandfather, Dante Fascell, represented parts of South Florida in the state House and U.S. Congress for decades. Diamond has cited his grandfather’s service as an inspiration for his own political career.

“State Rep. Ben Diamond is a smart, sensible, pragmatic public servant. In fact, service is in his DNA as his grandfather once represented Florida in Congress. Rep. Diamond is not a self-promoter, nor is he a flamethrower. Rather he is someone focused on getting things done and trying to bring people together,” said Preston Rudie, founder of Catalyst Communications Group. “He is laser-focused on issues important to his constituents and finding solutions. He has a very bright future and is perfect for Pinellas County as he’s respected by Democrats and Republicans alike.”

Joe Henderson’s take: Diamond was set to become the Florida House Democratic Leader this year but gave that up when Crist surrendered his seat in Congress to run for Governor. Diamond faces a tough fight to win the Primary over two strong challengers, but he has had his sights set on Washington for a while now. Here’s his chance.

previousNo. 24 on the list of Tampa Bay's Most Powerful Politicians: Janet Long

nextNo. 22 on the list of Tampa Bay's Most Powerful Politicians: Jackie Toledo