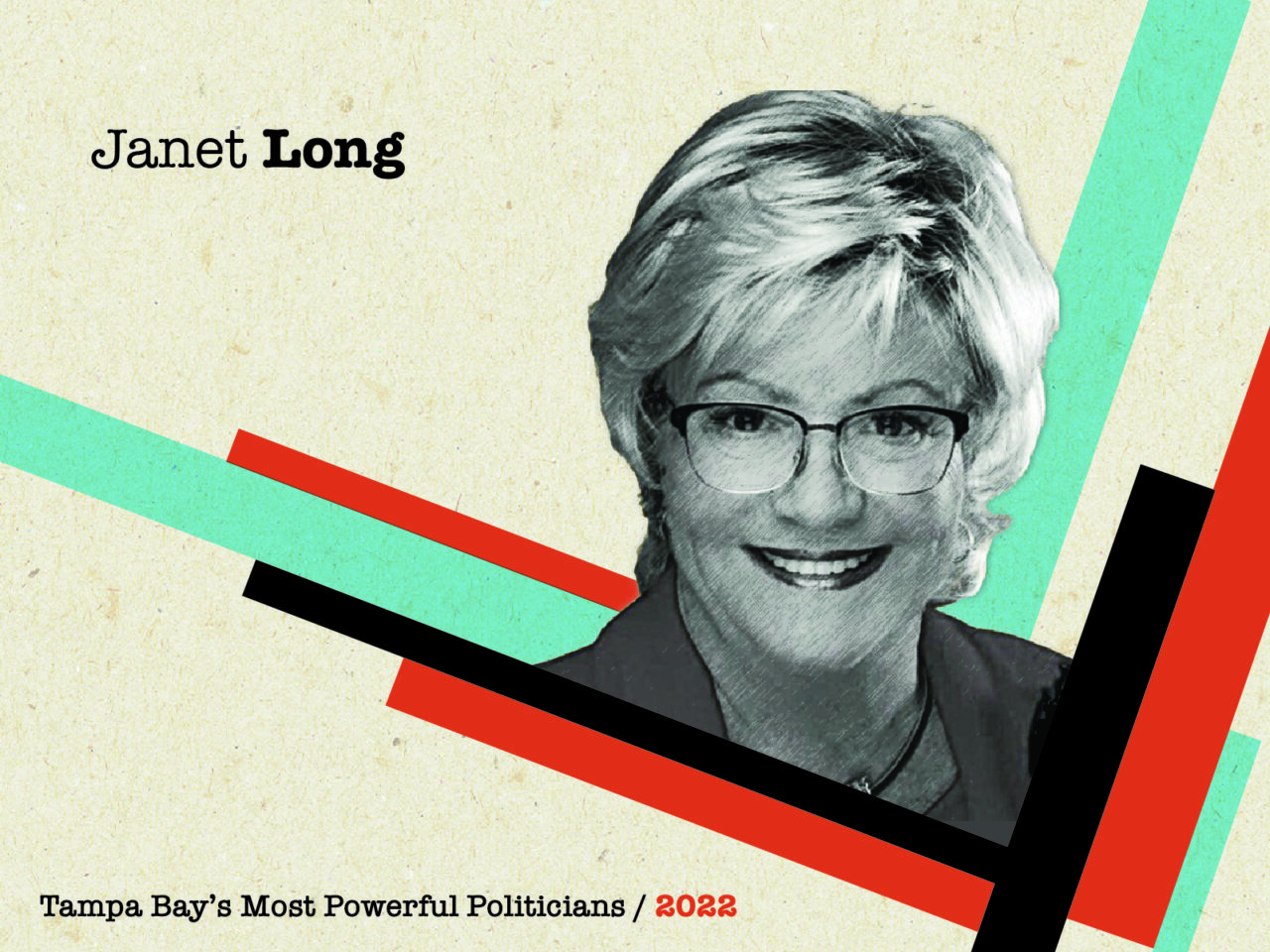 Last year, Long was assigned the No. 19 spot, following a successful re-election bid in 2020. The District 1 Democrat won 51% of the countywide vote, defeating Republican challenger Larry Ahern — perhaps the most competitive race she has faced for the seat since her initial election in 2012.

Pinellas residents know Long as a champion for climate change policy and transit solutions. She is currently serving as the vice chair on the County Commission, also lending to her influence.

“Commissioner Long is a powerful force for sensible and forward-thinking policy. She is a tenacious advocate for law enforcement and a convener for serious and impactful conversations on resiliency and climate change. Time and time again, Janet’s heartfelt and genuine approach to working with her colleagues and the community keeps her among Tampa Bay’s most influential voices,” said Christina Barker, chief of staff for the Vinik Family Office.

In the last year, Long has led the charge on COVID-19 vaccine distribution in Pinellas County, serving as a vocal advocate for the shot. She’s a powerful voice in local Democratic circles and an ardent supporter of new St. Petersburg Mayor Ken Welch.

“Few people match Commissioner Janet Long’s genuine passion and fire for making our community better. Transportation, climate change, resiliency, affordable housing, if it’s an important issue to the community she makes it a priority to get things done. It’s truly remarkable how much of an influential force she is in Tampa Bay and her heart of service is always centered around making the region a better place for our kids and grandkids,” said Preston Rudie, founder of Catalyst Communications Group.

Flexing her commitment to sustainability and resiliency, Long worked with U.S. Rep. Kathy Castor to offer input into federal plans to combat climate change, which resulted in the congressional plan “Solving the Climate Crisis: The Congressional Action Plan for a Clean Energy Economy and a Healthy, Resilient, and Just America” in 2020.

The Florida Association of Counties (FAC) recognized Long as a “Presidential Advocate” for her work during the 2020 Legislative Session on sea-level rise and climate change policy. The FAC Presidential Advocate recognition is given to county commissioners who have shown exceptional leadership in advocating on issues advancing the group’s legislative agenda.

Before serving on the Pinellas County Commission, Long served on the Seminole City Council from 2002 to 2006, and in the Florida House of Representatives from 2006 to 2010. Long is familiar with the list, coming in at No. 15 four years ago when she chaired the County Commission.

Joe Henderson’s take: She brings passion to the fight for affordable housing, the environment and adequate transportation. Long continues to raise awareness of the vulnerability Pinellas County faces from sea-level rise and climate change. She is an important voice.

previousNo. 25 on the list of Tampa Bay’s Most Powerful Politicians: Luis Viera

nextNo. 23 on the list of Tampa Bay's Most Powerful Politicians: Ben Diamond