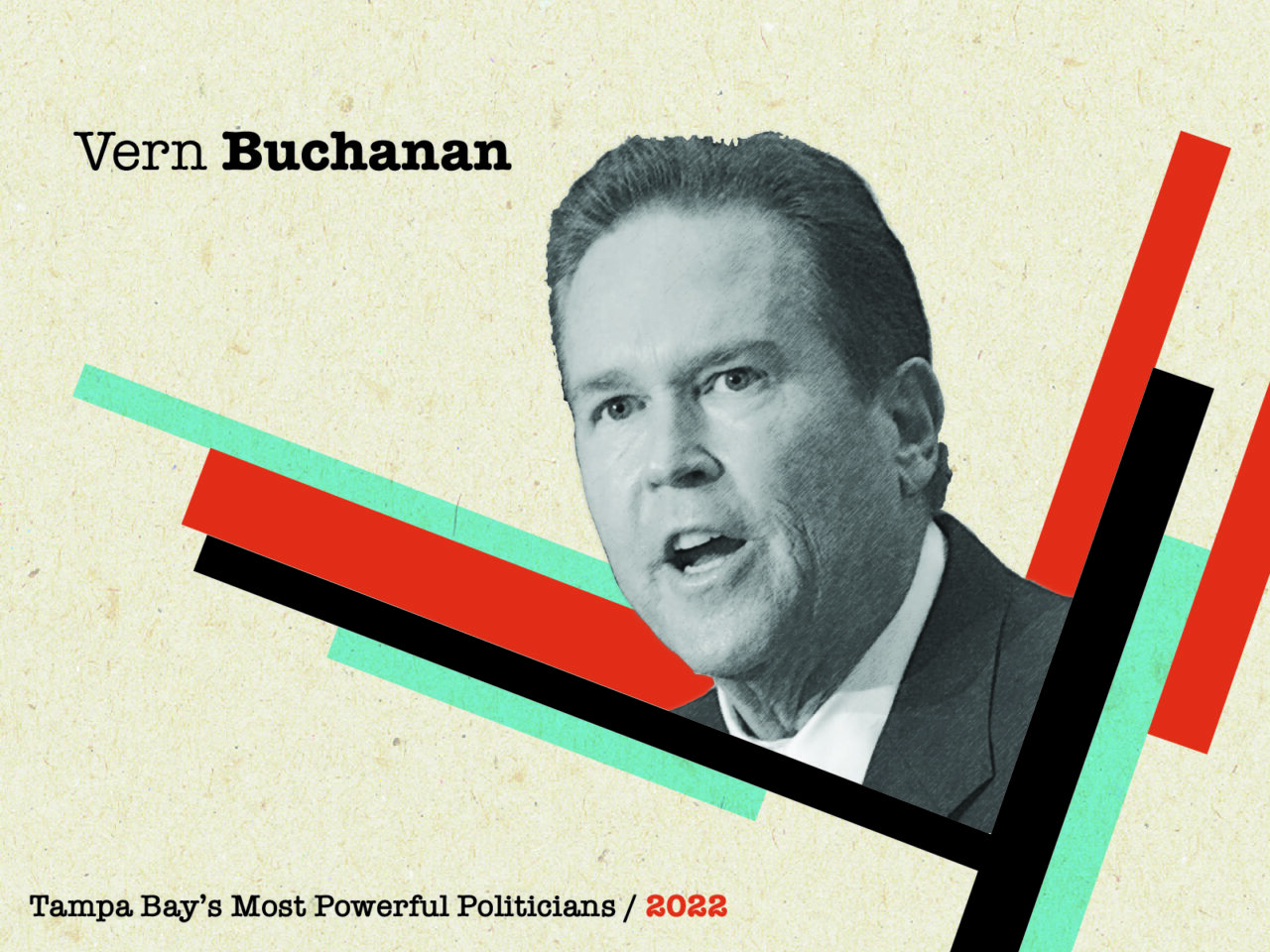 The Longboat Key Republican sits on verge of Congress' most important chairmanship.

U.S. Rep. Vern Buchanan arrived in Washington by a skin-of-his-teeth election win, with some wondering how long he would stick around. This year, he’s playing a major role in efforts to retake the House. This time next year he could chair the House Ways and Means Committee, making him one of the most powerful members of Congress.

For now, the Longboat Key Republican must settle for No. 9 on the list of Tampa Bay’s Most Powerful Politicians. But hey, he didn’t make the list at all last year. Granted, he seems to hold greater recognition in the Sarasota-Bradenton area than in the core of Tampa Bay, as he has represented south Hillsborough, Manatee and north Sarasota counties. That may explain how he has floated on and off the list at various times.

What has changed? Some political decisions by people in the only states more populous than Florida — California and Texas — resulted in a tremendous boost in influence for the king of Longboat Key. First, Texas U.S. Rep. Kevin Brady, the ranking Republican on Ways and Means now, announced last April he would retire at the end of his term. Buchanan announced immediately he would run for the top GOP post on the panel, but it always seemed U.S. Rep. Devin Nunes, a California Republican, held the inside lane.

Then former President Donald Trump changed the equation by offering Nunes a job running his social media platform, Truth Social. Nunes gave up his seat in Congress to take the gig. And now? Buchanan sits on the precipice of power.

The only thing seemingly in the way of Buchanan and the Ways and Means gavel is the Democratic majority. But a glance at the 12-seat advantage Democrats hold in the House today and President Joe Biden’s poll numbers heading into the midterms shows that to be a barrier on its way to crumbling. More than likely, Buchanan will be sworn in for a ninth term in January as the head of the most powerful committee in Congress.

“Wherever Vern is on your list, it is not high enough,” said Max Goodman, a political consultant who most recently ran a campaign for the Seminole Tribe of Florida.

Goodman has worked for Buchanan on the Hill and the trail. He noted no elected official from Florida ever chaired the Ways and Means Committee for a full term, and Buchanan’s ascendency raises both the Congressman’s clout and the entire state of Florida.

But none of this is to say Buchanan climbed into the top 10 through mere serendipity. Even before Buchanan held office, he served as chair of the Florida Chamber of Commerce. He was a business leader who built his fortune selling cars, and he took to Washington a willingness to shake hands and a desire to reach deals.

He originally landed his seat on Ways and Means in 2010, where he promised to focus on jobs, taxes and trade. In more than a decade in the job, he helped negotiate a replacement for NAFTA, serving as House liaison to the Trump administration during the crafting of the U.S.-Mexico-Canada agreement. He has helped advance Florida’s ports, including the Port of Tampa Bay and SeaPort Manatee in the region.

He also has served for years now as co-chair of the Florida congressional delegation, working with members of both parties on issues critical to the state. For years, the fiscal conservative forged a strong relationship with the extremely liberal Democratic co-chair, the late Alcee Hastings, and was the only Republican speaker at a memorial service for the Fort Lauderdale lawmaker held at the U.S. House.

It’s why Brian Ballard, founder of lobbying firm Ballard Partners, calls Buchanan “one of the hardest workers in Congress.”

“(He’s) loyal to his constituents and a class act,” Ballard added.

Now, Buchanan serves as the senior leader in the delegation, working with Democratic Rep. Debbie Wasserman Schultz. He has kept the focus on geographic issues and likes to say the delegation stays away from partisan issues.

In his capacity as delegation leader, Buchanan often boasts that he avoids being weighed down in partisan debates. Yet on issues from drilling in the Gulf to supporting the state of Israel, the delegation has often shaped policy direction on even partisan issues. Often, the unity impacts funding issues like securing red tide or citrus greening research or battling the opioid epidemic at the state and local level. That’s helped bring millions to institutions like Mote Marine Laboratory and the University of South Florida, both institutions with a physical presence in Buchanan’s congressional district.

With stakes high for the coming election, Buchanan has stepped up an already impressive record of fundraising for national Republicans. He hosted a fundraiser for the National Republican Congressional Committee where he anticipated $1 million in collections, half of that being raised by him specifically and the rest credited to other GOP members of the Florida delegation.

The event topped that total — with a $1.2 million haul — and brought potential Speaker of the House Kevin McCarthy to Buchanan’s Longboat Key estate, where he has attended similar events in past election cycles.

The dollars gathered at the March 26 event are on top of more than $1 million Buchanan has already raised for the NRCC this election cycle.

And to boot, Buchanan’s knack for spotting political talent has made him one of the best-connected Florida Republicans. Joe Gruters, Republican Party of Florida chair, previously served as campaign manager and treasurer to Buchanan’s congressional campaign. Christian Ziegler, party vice chair and a sitting Sarasota County Commissioner, got his political start working on his campaign and in his congressional office.

Joe Henderson’s take: If Republicans regain control of the U.S. House, Buchanan could become Chair of the powerful Ways and Means Committee. That would make the Sarasota Congressman one of the most influential individuals in the country.