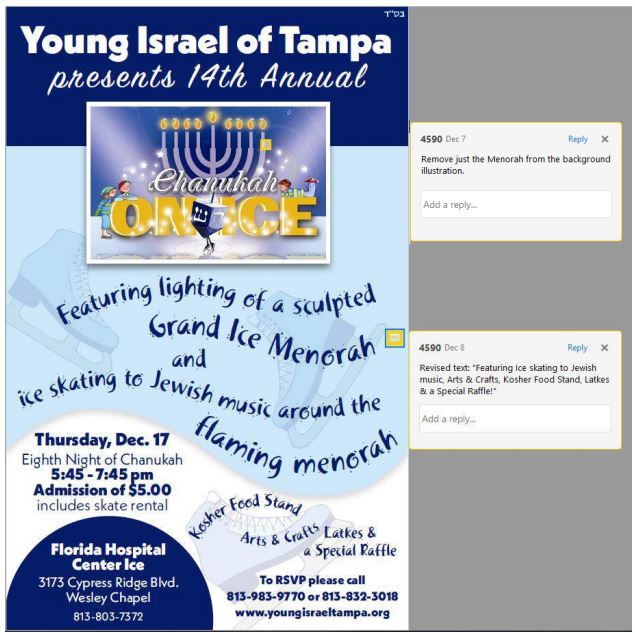 HART is now prohibited from enforcing its no-religious-ads policy.

The Hillsborough Area Regional Transit Authority, also known as HART, has agreed to pay a Tampa synagogue $40,000 in damages stemming from a 2021 free speech lawsuit.

In October 2020, HART rejected an ad from Young Israel Tampa, a local Orthodox Jewish synagogue. The temple was advertising its annual “Chanukah on Ice.” The event promised ice skating around a “Grand Ice Menorah” and “ice skating around the flaming menorah.”

“Thank you for writing, unfortunately we cannot assist,” Marketing Manager Laurie Gage wrote to the synagogue in early November, a few days after the initial submission. “HART does not allow religious affiliation advertising, as well as banning adult, alcohol, tobacco, and political ads.”

Young Israel appealed and in December 2020, HART representatives wrote back with suggested changes. They wanted the synagogue to remove any images or references to menorahs.

It didn’t go over well.

“You have proposed changing the ad by taking out the ad’s main image (a menorah) and by deleting the reference to the lighting of the Grand Ice Menorah — a key feature of our annual Chanukah on Ice celebration,” Youth Israel Rabbi Uriel Rivkin wrote in response. “As I’m sure you know, the lighting of the menorah is a central aspect of the Orthodox Jewish celebration of Chanukah. Thus, your changes are both offensive and not possible to make. Please let me know if HART will accept the ad as originally designed.”

HART didn’t go for it.

Young Israel followed in February of 2021 with a federal lawsuit alleging discrimination and a violation of the synagogue’s First Amendment rights. HART countered by saying the policy was not discriminatory and any possible relief was outwieghed by “public good” rejecting the ad accomploished.

“Defendant (HART) states that any alleged violation of Plaintiff’s rights do not entitle Plaintiff (Young Israel) to injunctive relief as any damage to Plaintiff is outweighed by the impact on employee morale, community opposition, lawsuits, security concerns, vandalism, and administrative burdens that HART reasonably based its decision to adopt the advertisement policy and the public’s interest in maintaining safe, reliable, non-controversial public transportation throughout Hillsborough County,” HART attorneys wrote in response to the lawsuit.

HART and Young Israel agreed to settle the case for $40,000 in damages plus attorney and court costs. The settlement, filed in late March, includes an injunction preventing HART from enforcing its policy against religious advertisements.

Representatives for HART could not be reached for comment.

previousLast Call for 4.12.22 — A prime-time read of what’s going down in Florida politics