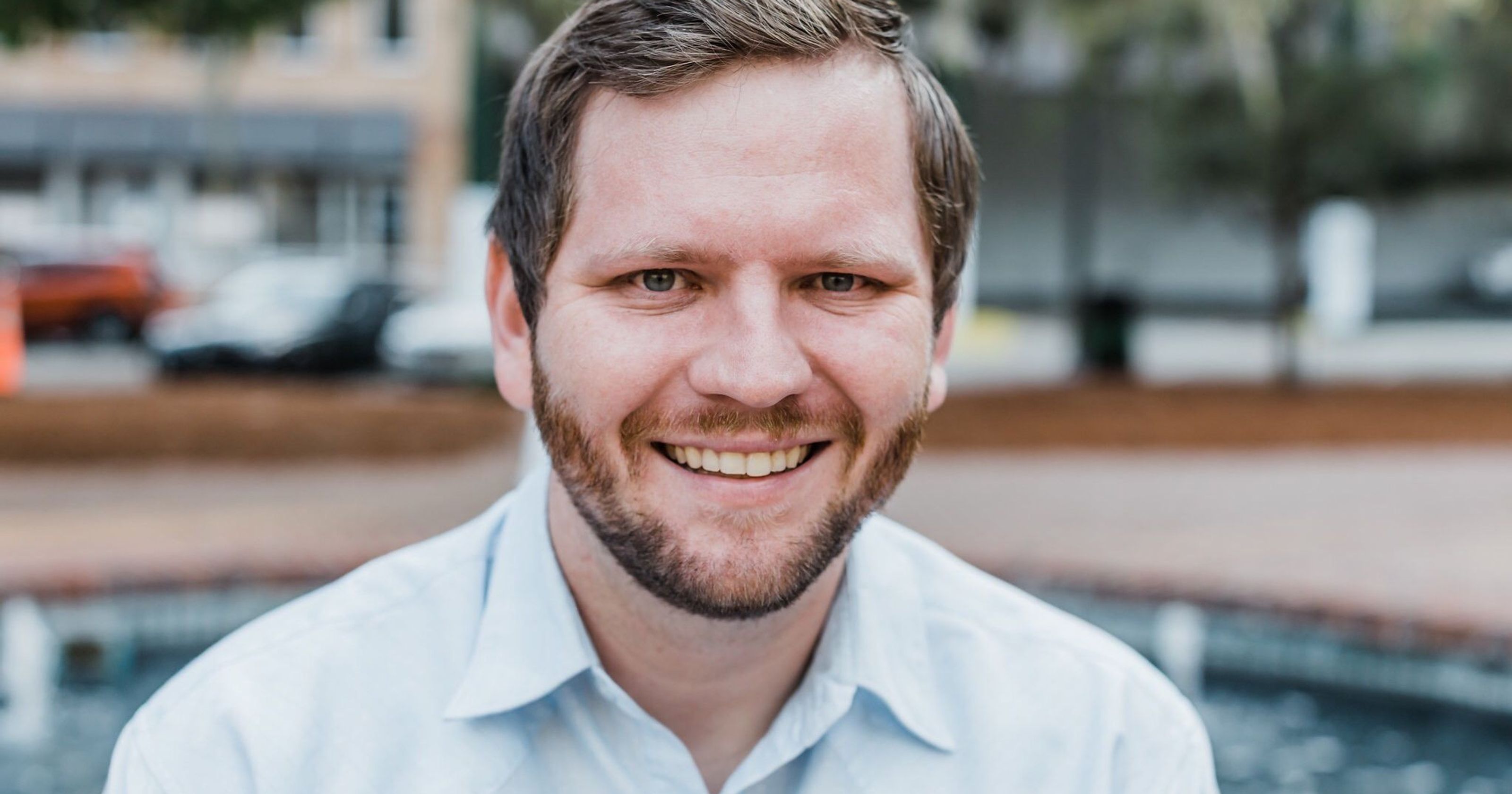 Matlow is willing to say almost anything to divide Tallahassee and rally his troops.

Most of my work involves state politics, given that the seat of Florida’s government rests in Tallahassee.

Nevertheless, I occasionally cast an eye toward the local government in this fine city.

And one thing I see right now: Tallahassee City Commissioner Jeremy Matlow has set up quite a racket.

As the Commission’s only millionaire — with a net worth greater than all the Commissioners and Mayor John Dailey COMBINED (according to mandatory disclosures) — Matlow shows the far left can also deliver Donald Trump-like division tactics and conspiratorialism.

A recent Twitter rant shows Matlow is willing to say almost anything to divide Tallahassee and rally his troops. His misdirection careens from leaving out relevant facts to flat-out lying.

Let’s break it down.

Disgraced Commissioner Scott Maddox took credit for a LOT of things he didn’t do. If we are to believe these wild claims, then Maddox got jobs for everybody in town.

Except it didn’t happen that way.

Even prosecutors acknowledged Maddox embellished his influence. And County Manager Vince Long, during a recent meeting of City and County Commissioners, flatly denied that Maddox (or any other Commissioner) had a say in his decision to hire Ben Pingree.

A question for Matlow: Why does he believe a discredited felon over the prosecutors who tried him and the distinguished County Administrator who served his community faithfully for decades?

No, “the public” hasn’t criticized those things — that was Matlow and his small band of followers. Blueprint was one of the most transparent, inclusive projects ever seen in Leon County.

People from all geographic areas, races, classes, and more took part and had their say. They held dozens of meetings. Blueprint passed with an almost two-thirds majority countywide.

Another question for Matlow: Why are you so intent on undermining the clear will of county residents? 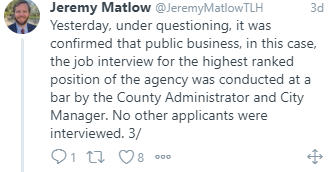 In the real world, it’s routine for obvious candidates to be the only ones interviewed for a position. It was even more understandable here, given that Pingree was recruited for the job.

Yes, Commissioner Matlow, sometimes candidates are identified and then courted for important jobs. And that’s exactly what happened here; shame on you for suggesting that recruiting an eminently qualified, nationally certified candidate was somehow corrupt.

So, nobody denied having a drink during this meeting?

I think we call that “rank innuendo.”

Further, anybody who doesn’t see a need to buy meals for potential economic development prospects is not qualified to be a leader in local government.

So, when competitors hear that their Florida community is up against Tallahassee for an economic development deal, they plan a victory party.

In Matlow’s world, how would it work? Ask prospective new industry CEOs to BYOB? Perhaps bring some leftovers in Tupperware? 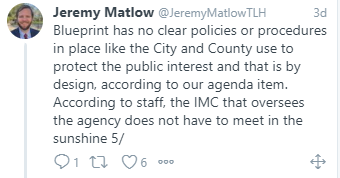 This first sentence is entirely false. Blueprint has all sorts of policies and procedures to protect the public interest.

Here are a few examples:

— Blueprint has one of the strongest real estate policies in the state of Florida.

— Purchasing: Blueprint has one of the most transparent, comprehensive purchasing policies imaginable.

Next, Matlow makes the “Intergovernmental Management Committee” (IMC) sound like a vast group, doesn’t he? In fact, it comprises two unelected people — the City Manager and County Administrator.

Can you imagine if they had to hold every conversation in the sunshine? It’s a ridiculous notion — they are just co-executives.

Apparently, a need for transparency doesn’t apply to Porter, who refused to answer rudimentary questions about the meeting: How long did it last? Who was there? What was discussed?

Perhaps Matlow can explain why his curiosity about Maddox’s influence doesn’t include his colleague. 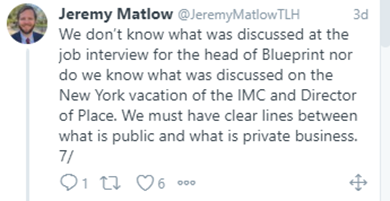 Of course, we don’t know — there is no scenario where contenders for a position like this (or personal trips) are for public view.

There is absolutely nothing preventing Matlow from asking the AG for an opinion on this — with or without a Commission vote. Does Matlow really want an answer (which will be that the IMC isn’t subject to sunshine), or does he want to demagogue the issue? 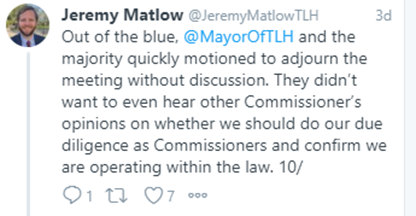 This is where Matlow’s obsession with Dailey drives him to lie.

Is there any way to read this (other than that Dailey made the motion)?

Commissioner Diane Williams-Cox made the motion after a long, inappropriate, McCarthy-esque prosecutorial line of questions by Matlow that dragged on for some time. There was one item on the agenda, and Williams-Cox had another important meeting to attend concerning gun violence.

What’s telling, though, is the obvious disgust felt by other board members. Commissioner Bill Proctor pleaded for civility before Matlow began his inquisition; that request obviously fell on deaf ears.

Commissioner Curtis Richardson was visibly upset by Matlow’s tactics and left the meeting before returning, as did Commissioner Carolyn Cummings.

Even the Blueprint attorney took the unusual step of interrupting Matlow’s ugly interrogation to point out that it was off-topic and becoming personal.

It may be a coincidence, but all of them are African American.

All those mocked — African Americans.

For his part, Matlow claims Herrle — his close adviser and friend — never communicated with him during the meeting. 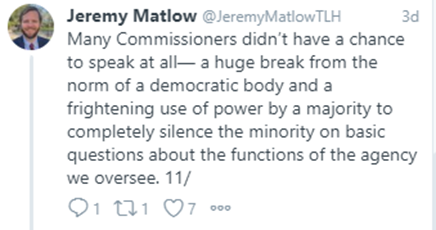 One can only hope the others seeking the chance to speak up simply wanted to condemn Matlow’s mean, relentless attacks. 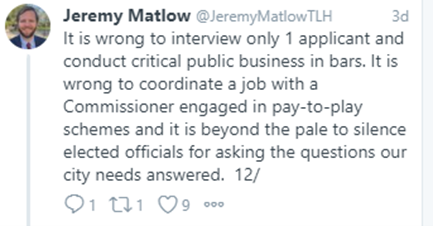 Interviewing Pingree was not “public business.” It would not have been open to the public wherever the interview occurred. This is another lie.

And the County Administrator already refuted that any other Commissioners played a role in this hiring.

Remember, the Maddox texts to which Matlow refers were a part of thousands of pages of transcripts. The FBI and Justice Department spent years in Tallahassee investigating local corruption.

Currently, there is zero evidence this investigation is continuing.

If all this corruption exists, why didn’t the FBI charge anyone else?

Again, this is all very Trumpian — Matlow created a Tallahassee “Deep State” and is willing to entangle fellow Commissioners, county managers, and business leaders, among others, in his quest to gain power and, presumably, become a multimillionaire.

Clearly, the reason to take Blueprint out from city and county control and put it on its own — with the director reporting directly to IA — is that if Blueprint is just the city and county (essentially, a handful of employees; mostly contract administrators) — it would not have the personnel to manage these giant ventures.

The city and the county — through Blueprint — really do these projects.

And they can stop those developments in their tracks.