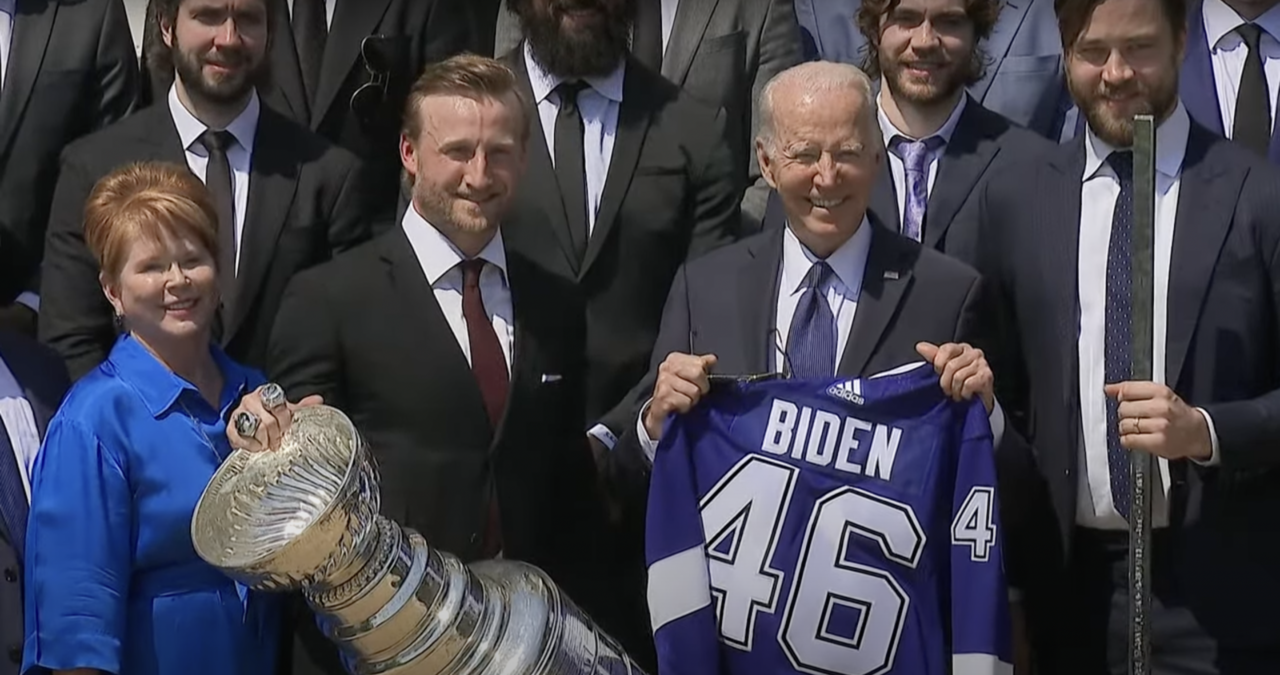 “At the risk of stating the obvious here, it’s a pretty good time to be a sports fan in Tampa,” Biden said at a White House ceremony honoring the Tampa Bay Lightning. “I don’t know what the hell you have in the water down there.”

He noted the Tampa Bay Buccaneers in 2021 won the Super Bowl and the Tampa Bay Rays in 2020 won the American League pennant. Then he cited the professional hockey team, the cause for the “celly” for back-to-back Stanley Cup wins.

“They might be here next year,” Biden said. “Who knows?”

Rep. Kathy Castor stood alongside members of the team and other local dignitaries including Tampa Mayor Jane Castor. NHL Commissioner Gary Bettman was also in attendance.

Lightning owner Jeffrey Vinik had the rare honor of being introduced by a sitting President to speak at the podium. He joked about the fact that First Lady Jill Biden had held a vaccine event at Tropicana Field.

“Our playoffs start in a week. The First Lady is welcome back,” he told President Biden. “They tell me she’s good luck. I don’t know about you yet.”

Team Captain Steven Stamkos said he appreciated the hospitality and recognition of the White House. “I’m so proud to be standing up here beside all these guys,” he said, alongside teammates from the current championship team and some from the prior one. The team also presented Biden with a Lightning jersey with “Biden 46” emblazoned on the back.

The event proved a largely apolitical one, but elected officials enjoyed some of the spotlight and the gleam of the cup.

“It’s great to see Congresswoman Castor,” Biden said from the stage, pointing to the Congresswoman as she waved a “Go Bolts” placard. “You didn’t think I didn’t see you holding up that sign?”

Rep. Castor, an enthusiastic fan of all sports in Tampa Bay, hyped up the ceremony.

“What’s better than celebrating the Lightning’s Stanley Cup victory at the White House? Celebrating back-to-back Stanley Cup wins at the White House!” she said. “The Bolts have unified our community throughout the pandemic, and we can all be proud of their grit, determination and commitment to serving the Tampa Bay area. They have had a truly electric run over the past few seasons, and we are all rooting them on as we head into the 2022 playoffs in the coming weeks.”

She also attended with WWE star Titus O’Neil, who had worked at the Bullard Family Foundation with the local sports community to improve the lives of families in the region.

“Titus is a true champion inside the ring and out, so I knew he had to represent hometown Tampa when the Bolts are feted at the White House with President Biden and Vice President (Kamala) Harris,” Castor said.

“Tampa is the City of Champions and Titus embodies that spirit through lifting up students and families in need. Through Titus’ leadership at the Bullard Family Foundation and the work of the Lightning Foundation, families and students across the Tampa Bay area receive direct and crucial assistance every day, including at every Lightning game. He is truly a community champion.”

Added O’Neil, “It is an incredible privilege and honor to join the Stanley Cup Champions Tampa Bay Lightning at the White House to represent Tampa Bay. Tampa Bay is home to sports teams that are not only champions in athletics, but collectively they have created a sports community that lifts up lives and lights up neighborhoods through incredibly generous support and giving. That’s what winning is all about.”