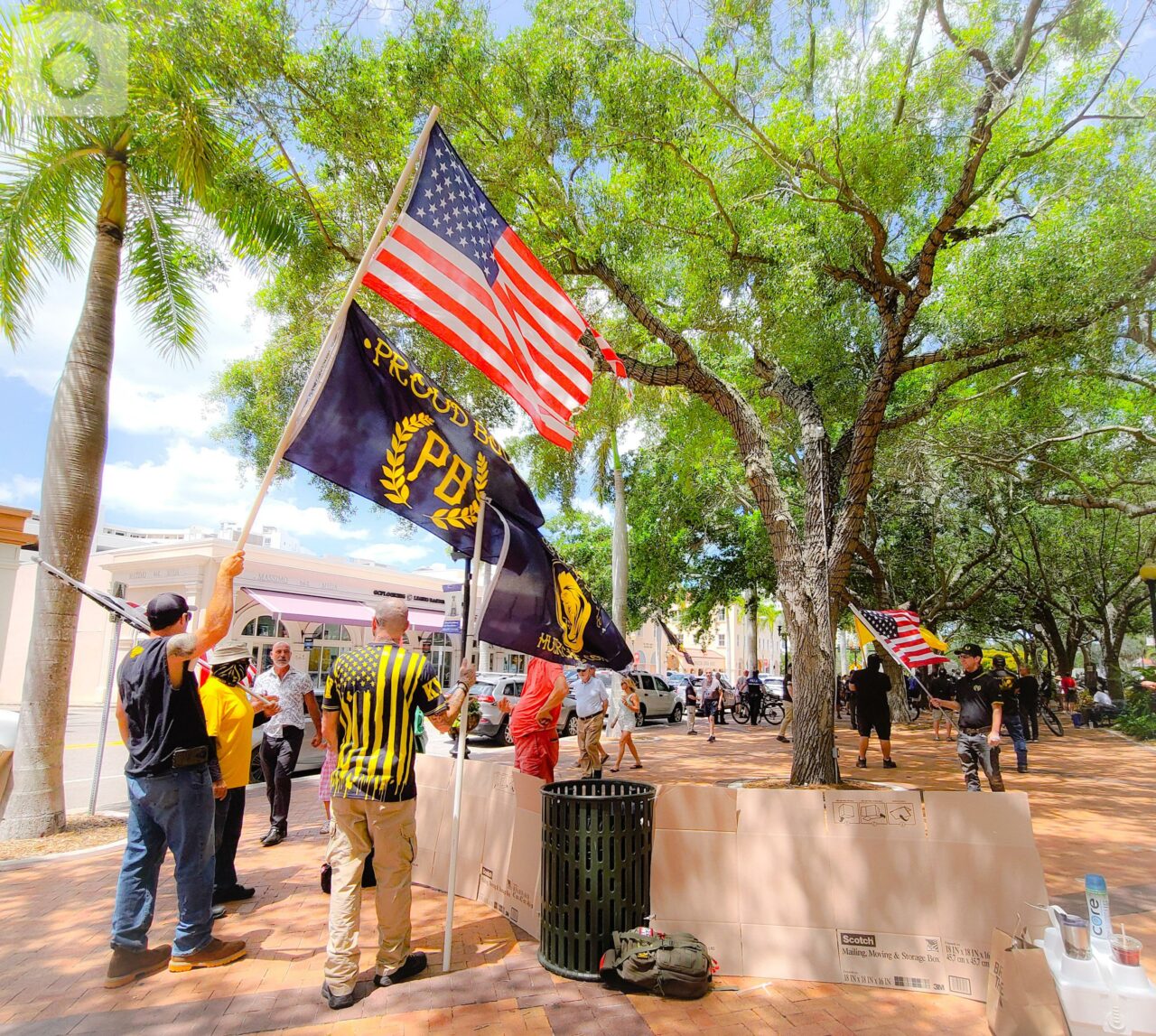 'Fortunately, everyone was heard, and nobody was hurt.'

Amid a robust police presence, diverse voices converged Sunday in a small downtown Sarasota park, waving flags and placards that expressed a wide range of views, particularly regarding some of Florida’s newest, most controversial laws.

The rally — organized by Women’s Voices of Southwest Florida and titled March for Our Futures — featured several speakers, including Democratic politicians Ken Russell, currently serving a second term on the Miami City Commission and also running for U.S. Senate, and Eleuterio “Junior” Salazar, Jr., who is running for the newly redistricted Florida House District 70.

“Even though it wasn’t a big crowd, it was a crowd that got the message across,” Salazar said, adding, “We are in such trying times right now; we are truly defining history as we speak.”

The 35-year-old financial adviser — a Manatee County native who currently lives in Hillsborough County in Ruskin — said the March for Our Futures had been informed by law enforcement days before the event, that police would provide an escort during the group’s march Saturday morning across the John Ringling Causeway and throughout their rally at Sarasota’s Five Points Park, between the Sarasota Opera and a public library.

While a couple of dozen members of the progressive group walked together that morning across the bridge that crosses Sarasota Bay, then walked into downtown Sarasota amid the crush of a popular, annual boat show near the park, Salazar and the other marchers were, he said, warned, by some of their group’s members who waited at the park, that the Proud Boys had arrived there.

Kate Tardif, who took part in the march and described herself as a 60-something resident of Naples, said, “It was a little scary walking through [the Proud Boys] to get where we were going, and there were a lot of police.”

Approximately a dozen uniformed police — about as many as the members of the Proud Boys who were at the park that day — remained until the event dispersed around 1:30 p.m.

The Southern Poverty Law Center has identified the Proud Boys, founded in New York City during the 2016 presidential election, as a hate group consisting of White supremacists who are men. The Proud Boys describe themselves as “Western chauvinists.”

In Florida, several members of the Proud Boys have been arrested and charged in connection with the Jan. 6, 2021, insurrection at the U.S. Capitol, including the group’s chair, Enrique Tarrio, of Miami. Prosecutors allege he orchestrated the break-in at the Capitol.

At the rally in Sarasota, Proud Boys wearing black T-shirts waved large flags and shouted their condemnation of abortion and their support for Florida Gov. Ron DeSantis.

Ever since DeSantis’ Donald Trump-endorsed election as Governor in 2018, DeSantis has risen to national attention. And last month — amid DeSantis’ campaign for re-election this year — he signed into law the controversial Parental Rights in Education bill, dubbed by opponents the “Don’t Say Gay” law. It outlaws the discussion of sex and gender with the youngest children in Florida’s public schools, those attending kindergarten through third grade.

Objecting to the new law, Salazar said, “A safe place means that all children get to have a conversation.”

But makeshift signs displayed by the Proud Boys compared the discussion of such topics with young children to grooming them for sexual abuse. And one of the Proud Boys’ large cardboard signs read, “Stop grooming children! Respect a parent’s rights!” Another of their signs read, “No groomers in Florida!”

Referring to his 11-year-old daughter, who, Salazar said, attends public school in Manatee County, Salazar added, “I will do everything in my power and in my blood to protect that little girl.”

A divorced father, Salazar mentioned his positive experiences co-parenting his daughter along with her mother, who is Salazar’s ex-wife, as well as the child’s stepfather and Salazar’s same-sex partner, too.

“We are teaching her that love is love, and love is beautiful, and you love unconditionally based on what’s in your heart,” he said.

Salazar mentioned his own mother’s tender age, just 14 years old, when she gave birth to him, and he said, “I am blessed that she kept me.”

But Salazar objected to what he described as “forcing women to bring unwanted children into this world when they should have always been given the choice to have an abortion.”

“Sadly, these unwanted children are going to remain unwanted and end up in the foster system,” he said. “Then they are going to end up homeless,” he added.

He described children born as a result of unwanted pregnancy as “a financial burden” for women and other taxpayers, and he was among those at the rally who condemned the rising costs of housing and food.

Tardif — who, throughout the march and rally, held a large, hand-painted poster that read, “PRO-CHOICE is PRO WOMEN AND CHILDREN” — said, “Some of the reasons that bring women to a decision to abort have to do with inadequate affordable housing, the absence of living wages, the absence of medical care, the absence of transportation, child care.”

High housing costs were also a concern that Russell, of Miami, expressed when he spoke at the rally. It’s a concern that he had also addressed extensively in Miami and Sarasota, including when he met last week with members of the Sarasota City Commission to assist them in developing a so-called “inclusionary zone” to support affordable housing in Sarasota.

No stranger to Southwest Florida, Russell, 49, last fall assisted an abortion-rights group that battled the Bradenton City Commission when it attempted to outlaw abortion there through a local ordinance.

Regarding the rally in Sarasota on Sunday, Russell described it as “a microcosm of a very polarized view in our world right now.”

“Fortunately,” he said, “everyone was heard, and nobody was hurt.”

And while, “certainly, words flew,” he said, “it was peaceful on both sides.” 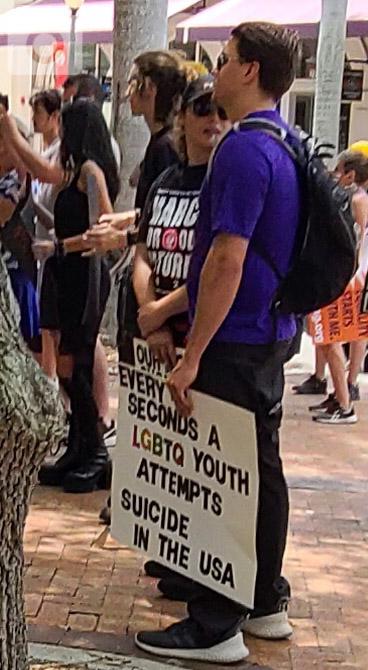 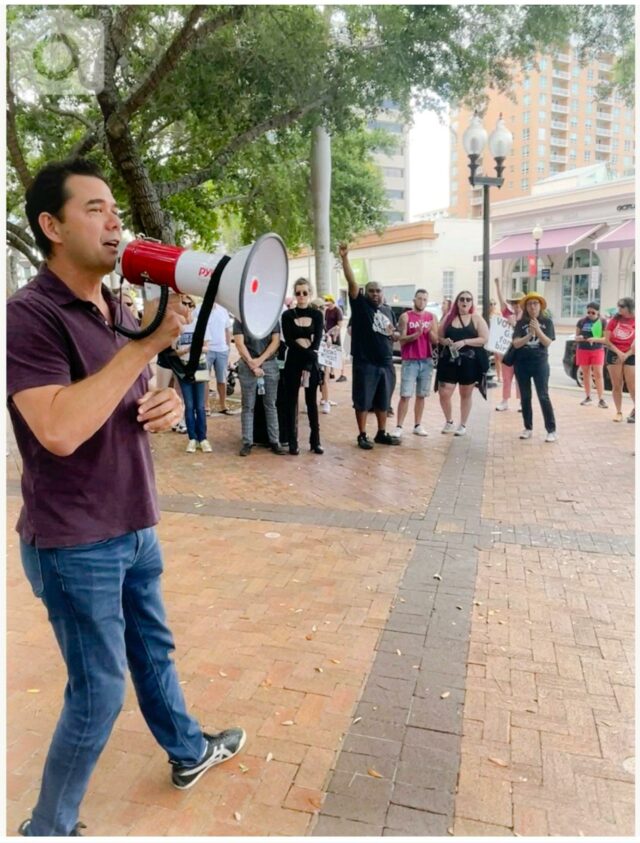 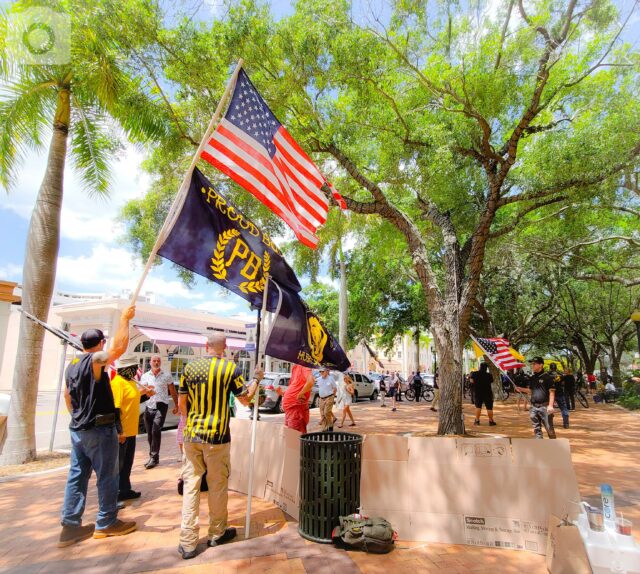 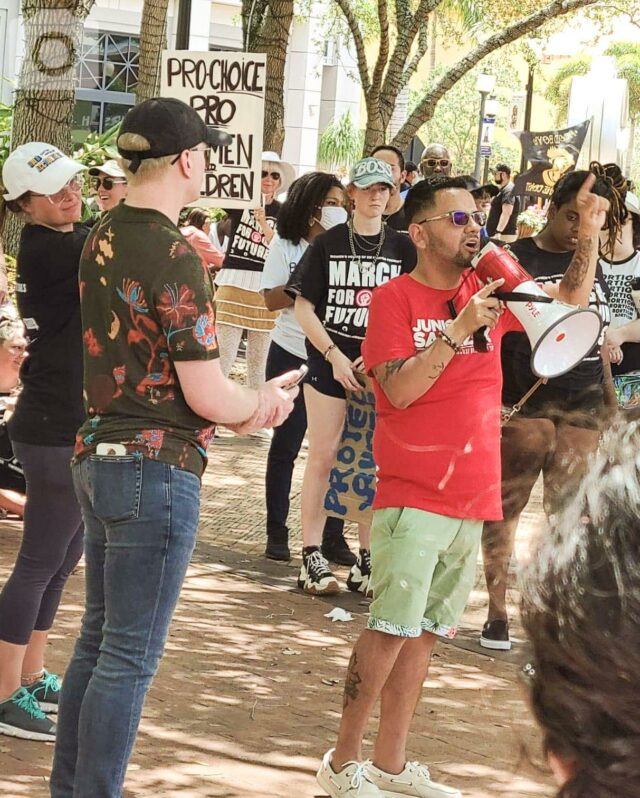 nextLast Call for 4.25.22 — A prime-time read of what’s going down in Florida politics