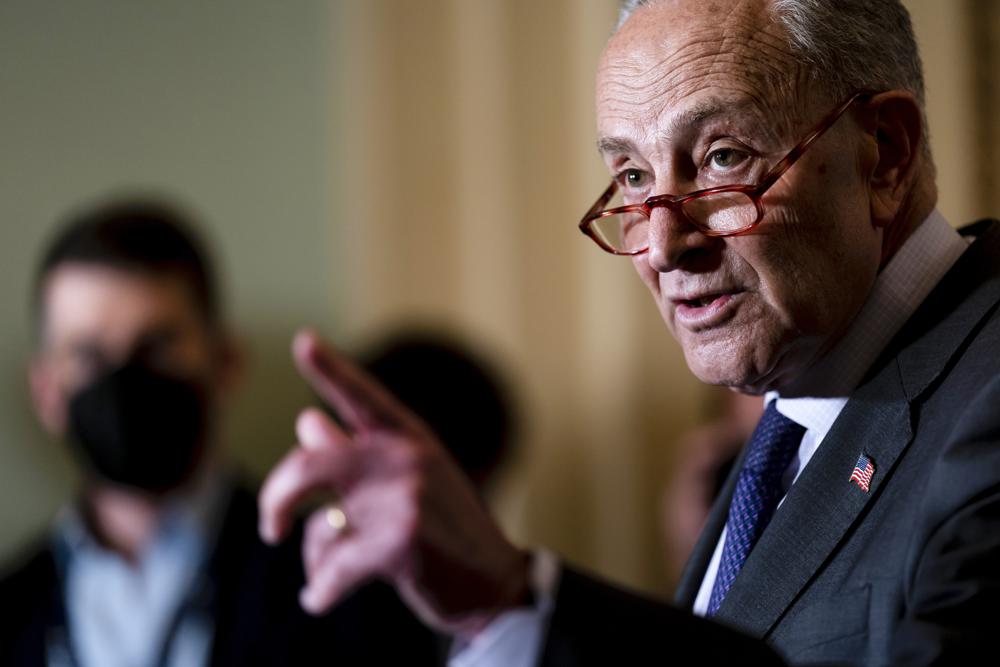 That spending concerned some Trump-friendly Republicans in Congress.

A $40 billion infusion of military and economic aid for Ukraine and its allies moved to the cusp of Senate passage Thursday as both parties rallied behind America’s latest, and quite possibly not last, financial salvo against Russia’s invasion.

Thursday’s vote would give final congressional approval to the package, three weeks after President Joe Biden requested a smaller $33 billion version. The House approved it last week after beefing up its defense and humanitarian expenditures and Senate passage was not in doubt, though a group of America First-minded Republicans was expected to vote “no.”

All opponents were Republicans last week as well when the House approved the measure 368-57. Though support in both chambers was unmistakably bipartisan, the GOP defections were noteworthy ahead of November elections for control of Congress and after former President Donald Trump, still a potent force in the party, complained that such sums should first be targeted at domestic problems.

New York Democrat and Senate Majority Leader Chuck Schumer said it was “beyond troubling” that Republicans were opposing the Ukraine assistance. “It appears more and more that MAGA Republicans are on the same soft-on-Putin playbook that we saw used by former President Trump,” said Schumer, using the Make America Great Again acronym Democrats have been using to cast those Republicans as extremists.

“The most expensive and painful thing America could possibly do in the long run would be to stop investing in sovereignty, stability and deterrence before it’s too late,” McConnell said.

Thursday’s vote was expected to largely resemble the 88-11 margin by which the measure cleared a procedural hurdle Monday, when every “no” vote came from Republicans.

Biden’s quick signature was certain as Russia’s attack, which has mauled Ukraine’s forces and cities, slogs into a fourth month with no obvious end ahead. That means more casualties and destruction in Ukraine, which has relied heavily on U.S. and Western assistance for its survival, especially advanced arms, with requests for more aid potentially looming.

On Wednesday, Schumer said he was not confident this would be the final measure to help Ukraine. “They’re doing the fighting, they’re the ones getting killed, they’re the ones struggling and suffering. The least we can do is give them the weaponry they need,” he said.

In a personal criticism seen seldom on the Senate floor, Schumer on Wednesday called Paul’s move “repugnant” and said the delay, with passage inevitable, would “strengthen Putin’s hand.” McConnell, who last Saturday met with Ukrainian President Volodymyr Zelenskyy during a surprise visit to Kyiv, did not speak up in his fellow Kentucky Republican’s defense.

In a brief interview, Paul responded that it would be “repugnant” to disparage “the democratic process” as embodied in Senate rules that he was using.

The legislation contains around $24 billion for weapons, equipment and military financing for Ukraine, restoring Pentagon stocks of arms sent to the region and paying for U.S. reinforcements sent there. The rest includes economic aid to keep Zelenskyy’s government functioning, food programs for countries that rely on Ukraine’s diminished crop production, refugee assistance and funds for Kyiv to investigate Russian war crimes.

That spending concerned some Trump-friendly Republicans in Congress.

“It’s, you know, the world’s going to end if you don’t do anything here,” said Indiana Republican Sen. Mike Braun, who said he would oppose the Ukraine measure. “I’m more worried about the trust fund going broke” that finances Medicare and another that pays for Social Security.

Braun said he’s long pushed for bills that pay for themselves. Asked why saving $40 billion in this instance outweighed stopping Russia, he said, “Number one, it’s going to pass.”

Another conservative, Texas Republican Sen. Ted Cruz, said that as costly as the measure is, the aid will protect U.S. national security and said, “If Putin wins, the consequences for America and American taxpayers will be hundreds of billions of dollars.”

Utah Republican Sen. Mitt Romney, a moderate who has clashed with Trump, said in an interview that helping Ukraine defend itself ”is about as smart an investment as we could possibly make.” He added, “What does America First mean? It means that we should first be concerned about the interests of America. I totally agree.”

Congress approved an initial $13.6 billion measure in March. The combined price tag of nearly $54 billion exceeds what the U.S. spent on all its foreign and military aid in 2019, according to the nonpartisan Congressional Research Service.