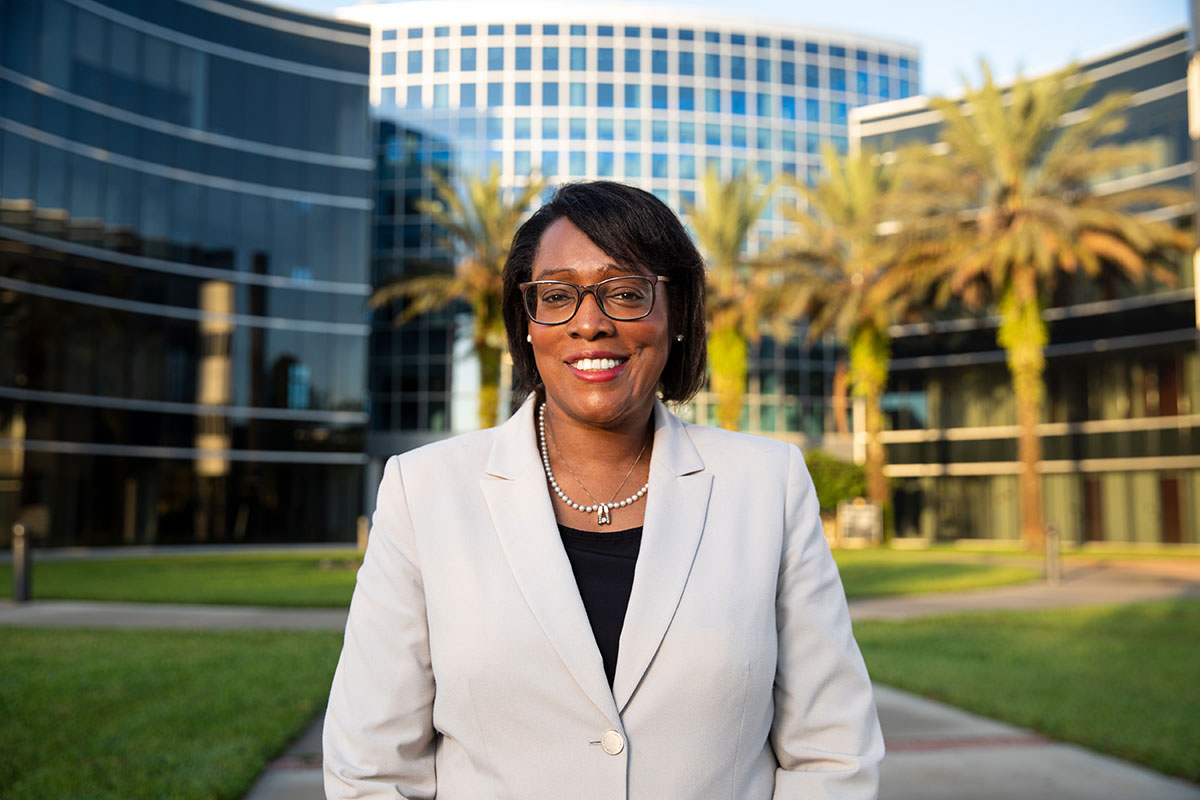 Elizabeth Dooley tenure as provost was short-lived, but she remains on staff making nearly $400K.

Elizabeth Dooley broke barriers as both the first woman and African-American to be No. 2 in command at one of the nation’s biggest universities. But her tenure as University of Central Florida (UCF) provost was short-lived. At a school hit by scandals, Dooley soon had one of her own.

Under fire, she resigned from her position in April 2020 as the school investigated her for abusing her power to help her husband find a job, for making disparaging racial comments about White people and other misconduct, according to the investigation’s findings documented in a new report.

Since stepping down as provost, Dooley has remained on the University of Central Florida’s tenured faculty and is currently paid nearly $400,000 as an education professor.

Dooley’s attorney, Carlos Burruezo, said in an email, “Dr. Dooley is not receiving anything to which she was not otherwise entitled as a tenured faculty member.”

Dooley’s downfall as provost is detailed in a March 25 report sent to new UCF president Alexander Cartwright. UCF released the report to Florida Politics after a public records request. The school’s investigation was sparked by multiple complaints against Dooley in the fall 2019 and spring 2020.

For years, Dooley asked everyone from UCF subordinates, a pair of UCF trustees and companies conducting business with UCF to hire her husband, the report said.

Dooley, who declined to comment this week for this story, argued she hadn’t done anything wrong and called UCF’s investigation “flawed, unethical, and conducted in ‘bad faith’” in an April 28 memo she sent Cartwright, other administrators and her attorney.

She accused the school of investigating her because of her race.

“The issues I have encountered at UCF are related to the fact that UCF is not really ready for an African-American leader, let alone a Provost. The University might say the right things in public, but it has done little to support and foster diversity within its leadership. Instead, it has worked hard to tear down those of us who appeared to have made it,” Dooley wrote. “I will be filing claims of racial discrimination against UCF and pursuing every other legal option that is available to me.”

Dooley added that during UCF’s two-year investigation, “My life has been in limbo, and my professional career and reputation have been detrimentally impacted.”

Dooley had risen in the ranks at UCF since she was hired in 2015 to be vice provost. She contacted Human Resources “several times, more frequently at the beginning of her hire, inquiring about positions for which her spouse had already applied or was thinking about applying, and asking for the names of the hiring managers,” the report said. “The HR employee stated they did not feel uncomfortable with these requests but stated they had never received these types of requests from a vice provost or provost in the past.”

After Dooley was promoted to provost, she inquired about job prospects for her husband with two UCF trustees in 2019 and highlighted his work experience.

“With one of the Trustees, she specifically mentioned a position where her spouse had already applied for a position. The second meeting was a request to meet face to face with her spouse attending,” the report said.

Some of the UCF trustees are employed at the community’s most powerful companies. The report did not indicate which trustees Dooley spoke with, and a UCF spokesman did not respond when asked.

Using her work email, Dooley contacted companies interested in doing business with UCF to inquire about her husband’s job opportunities.

In one 2019 email she appears to write to someone at Amicus Therapeutics, a biotech company looking to open a facility in Lake Nona. Dooley passed along her husband’s resume and wrote at the end of her message, “I would like to know, as UCF’s provost, how may I assist you and your team?” She cc’d her husband.

That year, she also emailed the CEO of CareerSource, a company that had previously been a UCF vendor. Earlier, the CEO and Dooley ate lunch together and Dooley, who was representing UCF as the provost, learned about CareerSource’s technology.

“Thank you for volunteering to connect my husband, Cornell Newbill with one of your colleagues. Cornell sent you an email last week — sharing his resume. In case you didn’t receive it, I have provided his email below and attached his resume,” Dooley wrote.

Dooley argued her outreach was simply networking when questioned by UCF during the investigation.

The investigation report called Dooley’s networking justification “plausible for those contacts with peers and colleagues in the university. However, Dr. Dooley’s contact to members of the Board of Trustees is inappropriate,” the report said.

“Additionally, her repetitive inquiries to HR employees in a subordinate position requesting assistance and information, though not illegal, is a misuse of her position and demonstrates poor decision making. Perhaps more concerning however, is Dr. Dooley using her position to discuss possible job opportunities for her spouse with existing partners and potential vendors which is a severe misuse of her official position and a conflict of interest where her professional and personal interests clearly intersected.”

The report called it a “prohibited quid pro quo arrangement” for Dooley to offer her assistance to a company at the same time she asked about a job for her husband, the report also said.

Dooley saw the new downtown Orlando UCF campus as a potential job opportunity for her husband.

An unnamed UCF administrator “stated that the two were in the same leadership meeting earlier that morning (in December 2019) to discuss positions at the UCF Downtown campus. Dr. Dooley asked them to stay behind after the meeting and proceeded to point at the organizational chart and asked the employee if there was a spot here or somewhere else for her spouse. She then proceeded to list her spouse’s skills and experience with community engagement. The employee stated that they tried to change the subject and left the meeting,” the report said.

When the administrator raised concerns to then interim UCF president Thad Seymour, Seymour admitted Dooley had previously asked him about her husband’s job opportunities before too, the report said.

Dooley defended her actions, saying “It was a conversation not an ask,” according to the report.

In her memo last month, Dooley wrote, “The suggestion that I used my position to obtain a special privilege for my spouse is nonsensical. … I relocated from West Virginia to Central Florida in 2015 to assume the Vice Provost position at UCF. My husband graciously supported my move and resigned from his position (to) further my professional ambitions. During the transition to UCF, former UCF President Dale (Whittaker) encouraged me to reach out to various community resources to inquire about potential employment for my husband.”

Cornell Newbill was paid $21.55 an hour working as a coordinator at the UCF College of Health and Public Affairs (COHPA). He resigned two months into the job in 2017, complaining he was doing different work than what he initially expected, the report said.

“A witness who was part of the provost’s leadership team at the time shared with (UCF investigators) that Dr. Dooley’s spouse was not happy with the position at COHPA because he felt it should have been at a higher level even though he did not have the requisite experience or background. The witness also stated that Dr. Dooley thought her spouse should have been paid more,” the report said.

Dooley also made inappropriate comments when investigators read her text messages and emails and interviewed witnesses, the report said.

When referencing the Board of Governors, which oversees Florida’s public universities, Dooley wrote, “This group has limited perspectives. White privilege at play.”

Another time, a dispute happened between Briant Coleman, who was then Dooley’s mentee, and an unnamed UCF employee on Dooley’s leadership team.

Coleman is a Black man. The unnamed employee is a White woman.

Dooley texted Coleman and encouraged him to get along with the woman.

“Keep your Afro, we have to have a cohesive team.” Dooley wrote. “Just as you are looking out for me; I’m doing the same for yours. … I understand your frustration. … Your next move is a VP. Let’s build the path forward. Leave the white women behind.”

The remarks violated UCF’s code of conduct, the report said.

When confronted with the texts, Dooley argued the text was intended to be private. The report noted she was discussing school business with a UCF employee which makes the exchange a public record.

“It was not meant in the literal sense of leaving white women behind. I was talking about building a cohesive team, being a VP, and how he can’t be impacted by the structure around him,” Dooley said, according to the report.

Without conducting a competitive search, Dooley pre-selected Coleman for a promotion as an associate vice president of strategic initiatives, communication and marketing, the report said as another criticism of Dooley.

UCF eventually fired Coleman, who was investigated for misconduct himself.

A Twitter account called University of Corruption and Fraud had been publicly posting allegations about Dooley and other school officials. UCF placed Dooley on paid administrative leave in January 2020 when the school started investigating her, a story which gained local media attention. At the time, UCF did not give a reason for the investigation.

Dooley and UCF reached a settlement agreement that said she would step down from provost in April 2020 and return to the faculty getting paid about 82% of her $470,400 a year provost salary. Dooley and UCF also agreed not to sue each other over issues arising from her time as provost.

Now as a faculty member, Dooley’s current salary is $394,503 — four times more than what some of her fellow colleagues make. The other professors’ salaries range from $98,561 to $231,979 in the UCF College of Community Innovation and Education, according to figures provided by UCF.

“Dr. Dooley was hired as a tenured faculty member when she was selected as vice provost for Teaching and Learning and dean of Undergraduate Studies. When she chose to step down from her role as provost, she returned to the faculty. This is consistent with standard practice at UCF and in higher education,” UCF spokesman Mark Schlueb said when asked why Dooley is still employed at the school.

In fall 2022 and spring 2023, Dr. Dooley will teach two graduate courses each semester and also coordinate the Teaching, Learning and Development track of the Ph.D. in Education both semesters, according to the university.

It’s not unheard of for university presidents embattled in controversies to step down as administrators and move into the faculty ranks instead, said James Finkelstein, a professor emeritus of public policy at George Mason University who studies higher education contracts.

One recent example: The University of Michigan’s Mark Schlissel was fired this year as president for having an affair with a subordinate and instead of leaving the school, he moved into a new role as a professor with a $185,000 salary, Finkelstein said. As president, Schlissel previously made just shy of $1 million a year as president.

In higher education today, it’s trickling down to provosts under fire returning to faculty ranks too, Finkelstein said, adding someone can be forced out of an administrator job but it’s a separate issue from that person losing tenure rights as a professor and being terminated from the faculty.