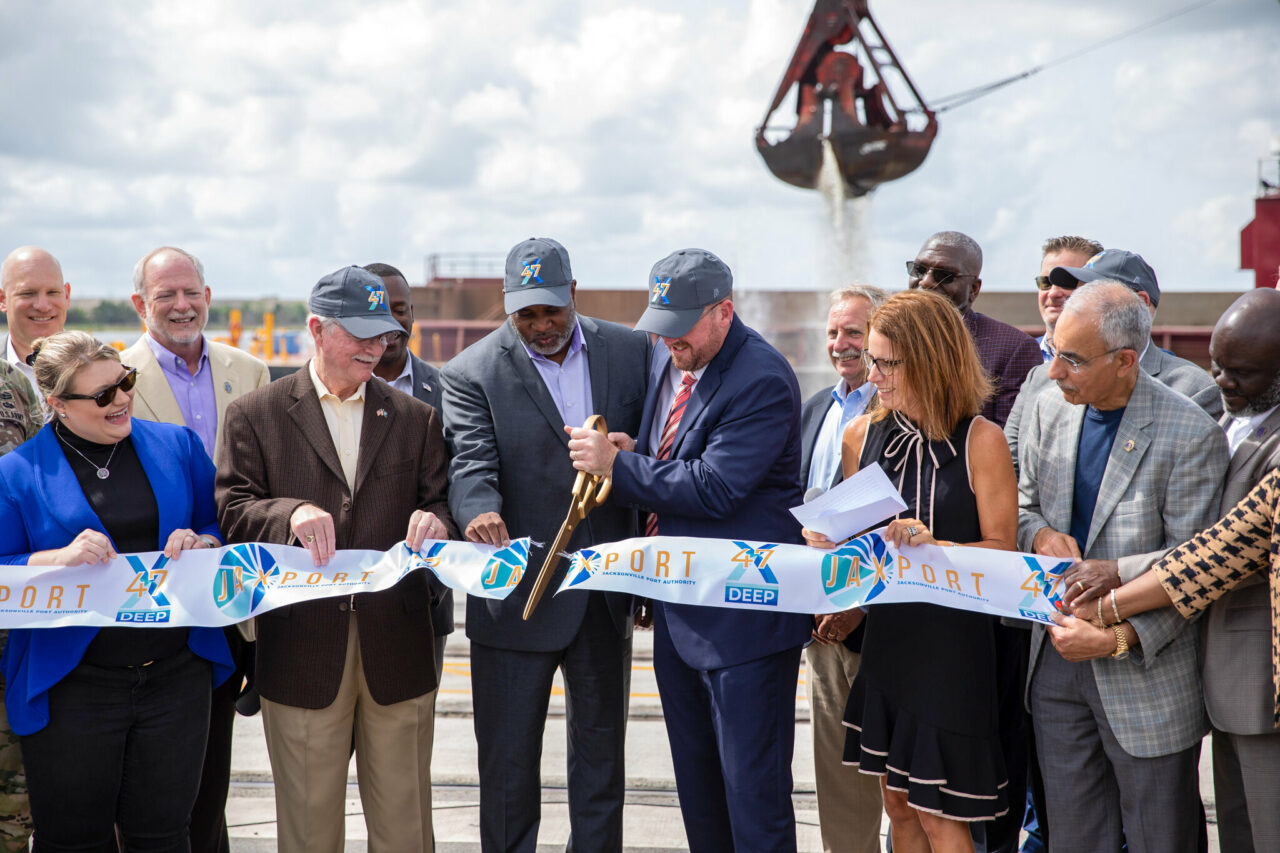 With a dramatic haul of one last sediment scoop from the St. Johns River — and the snip of scissors on ceremonial ribbon — JAXPORT is officially a 47-feet-deep port at Blount Island, able to service the largest cargo ships that transit the seas.

“JAXPORT’s mission is to create jobs,” Port CEO Eric Green said Monday. “A deeper harbor creates and protects 15,000 (combined) jobs in our region. A 47-foot channel connects U.S. consumers and businesses to the global economy, and provides an efficient option for our state’s exports to send their ‘Made in Florida’ goods to the global marketplace.”

Studies for the project began in 2005, the same year Green began working for the Port Authority.

“Back then, this community had a vision,” Green said. “We knew that Jacksonville could be a solution to the nation’s supply chain needs. We also knew that getting there would be a difficult process that would take resources and partnerships. Fortunately, we have some great partners.”

The project came in under budget and ahead of schedule, he added, bringing together the federal and state governments, the city of Jacksonville, JAXPORT and SSA Marine.

“We have the opportunity, as SSA Marine, to be in a number of ports across this country,” said Mark Knudsen, vice president of business development at SSA Marine. “Nowhere has a coalition come together to support the industry like Jacksonville. From … (every) level, we’ve come in here and we’ve had a unique partnership from the day we sat down to talk with Eric and his team about how we could be a part of this community.”

The Blount Island Marine Terminal was 40 feet before the deepening project. To get to where it is now, the project received around $419.5 million in funding overall, with around $195.6 million from federal sources and close to $223.9 million from non-federal sources.

The project contracted out in three parts, with Contract C concluding with Monday’s announcement. Great Lakes Dredge & Dock handled creation of a new Blount Island turning basin — around 2,500 feet by 1,500 feet — and dredging around three miles of river. That last contract involved around 4.11 million cubic yards dredged. Altogether, Great Lakes and the Dutra Group scooped more than 12 million cubic yards of sediment from the river bottom.

“Anchored by harbor deepening, well over half a billion dollars in infrastructure improvements have been completed or are underway to improve our container capabilities here at Blount Island,” Green said.

In a lot of ways, the project celebration isn’t so much an end, but a mile marker on a continuing path.

“I am proud to share the news, first with all of you, we have just completed $100 million in work upgrades,” Green said, “to allow us to accommodate two post-Panamax ships at the same time.”