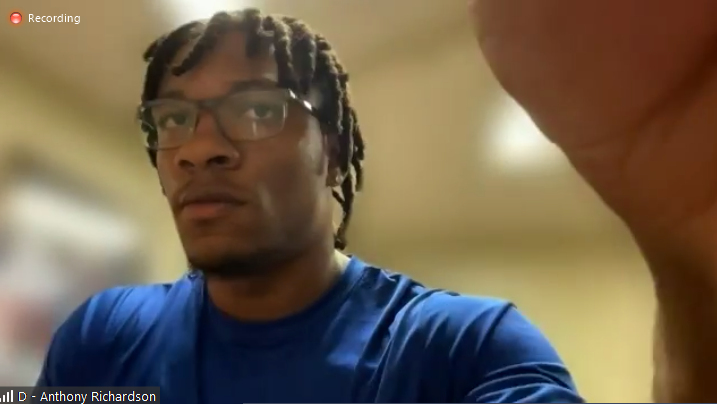 'I understand what I could have done to not only myself but to others as well.'

Florida Gators quarterback Anthony Richardson told a judge in a court-ordered essay that he no longer drives the sports car in which he was ticketed for speeding 105 mph and apologized for risking the lives of others while letting down the university.

Alachua County Court Judge Meshon Rawls assigned the essay to Richardson during a court hearing last week, responding to a request by the quarterback’s lawyer to avoid assessing points against the player’s driver’s license. The court made the essay available overnight Wednesday.

“I understand what I could have done to not only myself but to others as well,” Richardson wrote in the two-page essay. “I also have a much better understanding of the traffic laws, rules, regulations and the data behind them.”

Richardson, 19, of Gainesville told the judge he no longer has the 2021 Dodge Charger he was driving that night, given to him by a local Dodge dealership under new NCAA rules allowing athletes to be compensated for their name, image or likeness. He did not offer further details. Under the dealership agreement, it provided Richardson with a 2021 Dodge SUV or its equivalent with an option to exchange it every three to six months through the 2023 season.

A Sheriff’s deputy pulled over and ticketed Richardson at 4:11 a.m. on April 4 for driving 105 mph in a 60 mph zone about 12 miles west of the university’s campus. Weeks earlier, on Feb. 26, he was also ticketed for driving 91 mph on an interstate in Georgia in a 70 mph zone, according to newly submitted court documents. His lawyer told the judge last week the Georgia ticket was for 90 mph, and he paid a fine to resolve it.

In the Florida case, the deputy said Richardson was driving faster than 105 mph but his Sheriff’s pickup truck would not go faster than 105 mph as he paced Richardson with emergency lights. The deputy said that meant he was unable to ticket Richardson for driving at least 50 mph over the road’s 60 mph speed limit. Under Florida law, that faster speed would have resulted in a mandatory $1,000 fine and could have resulted in a judge suspending Richardson’s license.

The top speed for a base model 2021 Dodge Charger is at least 147 mph, according to its manufacturer. Some Charger models with larger engines can reach 203 mph.

Richardson also attended a 12-hour traffic school in Tallahassee last month, after he received his 105 mph ticket, according to court records.

The judge last week fined Richardson $349, an amount similar to what is assessed against other drivers who have been ticketed for 105 mph in a 60 mph zone, according to a review of millions of traffic tickets in recent years across Florida.

In his essay, Richardson offered the judge what he described as a sincere apology and said embarrassment over the ticket had been a painful experience. He said he was aware that others — including his younger brother — consider him a role model.

Richardson wrote to the judge that he has made a few changes in his life recently to deter the temptation to speed.

“I plan to do more planning ahead to make sure I schedule enough time to get to and from my destinations,” Richardson wrote.

During last week’s court hearing, the judge said she would consider — but did not guarantee — that she might avoid assessing points to Richardson’s license if he submitted the essay.

“I don’t think there is a compelling circumstance or explanation for 105 mph,” Rawls said.

“I just remember driving home that night,” Richardson said during his court hearing. “I was putting in my maps, and I didn’t realize I was going that fast because I looked up and seen blue lights, and that’s pretty much all I remember.”

Troy Myers reporting; produced by Fresh Take Florida, a news service of the University of Florida College of Journalism and Communications. The reporter can be reached at [email protected]. You can donate to support our students here.