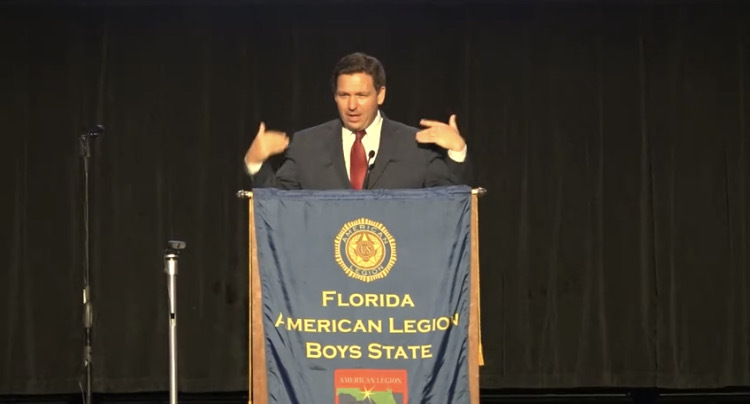 'A leader needs to understand where "true north" is.'

Public polls abound on Gov. Ron DeSantis regarding everything from his popularity to his presidential prospects. Yet the Governor continues to say he doesn’t poll issues, and this time around, he invoked a summer blockbuster film to make his point.

DeSantis said he made the decision “that when I became Governor, you know what, I’m not doing polling.”

DeSantis made the comments Tuesday at the Florida American Legion Boys State Program, contending he would not be “one of those politicians that just has their finger in the wind, that’s so worried about kind of this or that.”

“Responding to polls is being a follower,” DeSantis said. “It’s not being a leader.”

DeSantis bemoaned polling as a “static analysis,” before suggesting a push poll may be more useful.

“What I need to do is if I embark on an initiative, and I explain what I’m doing, and I’m successful in doing it, then what would the results be in the room?” DeSantis said.

“Too many politicians, they get paralyzed by these polls,” he continued. “A leader needs to understand where ‘true north’ is. You know, have you guys seen ‘Top Gun: Maverick‘? The Navy, like, we always know where true north is, these ships are out there, you’ve got these planes landing on the carrier, the jets,” DeSantis said, calling their efforts “really impressive.”

At a June 9 press conference in Fort Walton Beach, DeSantis warmed up the crowd by asking if they’d gone to see “the latest iteration of ‘Top Gun.'”

“I have not seen it. I’ve heard really good things about it. Has anybody seen it?”

Members of the crowd cheered in delight.

“I do want to see it at some point. I think it’s just, you know, it’s like any movie that’s not, like, overwhelmingly woke can actually appeal to normal people,” DeSantis said.

It’s unclear if the Governor has seen the film yet, but his campaign’s marketing team is pushing the tribute merchandise.

The black-and-white T-shrirts ($30), posters ($25), and koozies (two for $15) from the Governor’s re-election campaign are the latest in a series of creative marketing offerings from his team.

“Our Freedom First Agenda is at full throttle. Governor Ron DeSantis is on a mission to defend Florida from the Brandon administration’s unending failures,” the copy reads. “In Florida, we have a Top Gov — and we plan to keep it that way.”

For DeSantis, the brand synergy is a convenient narrative hook even if he never sees the film. DeSantis was a commissioned U.S. Navy JAG Officer, deployed in the global war on terror as an advisor to a U.S. Navy SEAL Commander in support of the SEAL mission in Iraq, where he earned a Bronze Star.