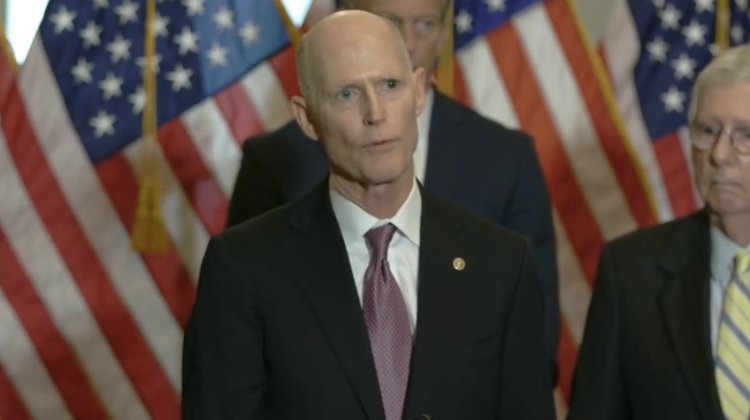 'They want to take good, hardworking Americans and make them dependent on government.'

Sen. Rick Scott continued to message around his new Let’s Get to Work Act Wednesday, calling it “real simple” legislation that would “get able-bodied Americans back to work” by potentially reducing access to federal benefits.

The bill would reinstate pre-pandemic work requirements in the Supplemental Nutrition Assistance Program and the Department of Housing and Urban Development’s (HUD) Public Housing and Tenant-Based Rental Assistance programs.

“Joe Biden and the Democrats have a war against work,” Scott lamented. “They want to take good, hardworking Americans and make them dependent on government. They want Americans to spend more time looking at whether there’s a new government program rather than focus on finding a new job.”

Scott contended that there is “virtue in having a job,” mentioning that he “grew up in a poor family” to underscore that point.

“I lived in public housing,” Scott thundered. “My mom told me ‘You’re going to work.'”

“Able-bodied Americans,” Scott continued, “ought to be part of the capitalist system. Be part of having skin in the game.”

The Senator’s remarks come a day after a press release announcing the filing of the legislation, which would cut off some current recipients from federal benefits.

The legislation would “encourage Americans who are able to work to return to the workforce by ending the current suspension of work requirements for the Supplemental Nutrition Assistance Program (SNAP), which was put in in place during the pandemic, and expanding these requirements to apply to all able-bodied adults receiving benefits who are under 60-years-old and do not have children under the age of six or care for incapacitated individuals.”

Currently, those 50 years of age or older qualify for these benefits.

This proposed legislation is endorsed by Heritage Action and Club for Growth.

Scott has taken heat, even on the right, for other proposals that would seek to extract more money from lower income Americans, such as his contention that they should pay income tax to demonstrate they have “skin in the game.”

“Here’s what’s unfair: We have people that don’t, that couldn’t go to work and have figured out how to have government pay their way. That’s not right! They ought to have some skin in the game,” Scott said on Fox News Sunday in March.

Responding to a previous story on the subject, Scott’s spokesperson McKinley Lewis bristled at characterizations of the narrowing of eligibility as a cut of benefits.

The bill expands grace periods “from 3 months in a 3-year window to 6 months in a 3-year period to account for the added complexities in these households,” and that it also “addresses the marriage penalty for married couples with children, only requiring one to work for the household to remain eligible for benefits.”