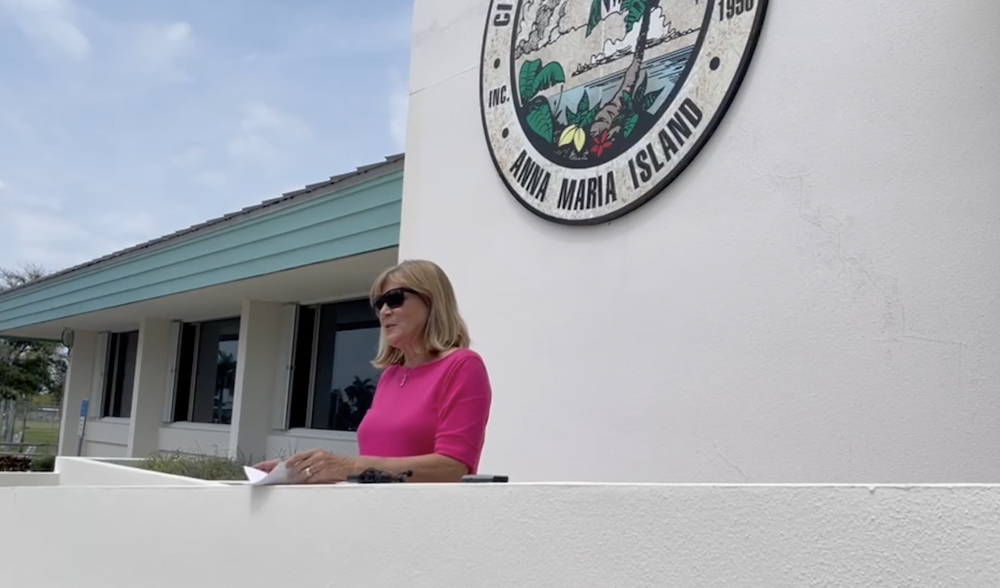 Bearden said he wants the full penalty possible levied for theft of the signs.

Whitmore on June 11 turned in three Bearden signs to Holmes Beach police and admitted pulling them from local properties. One was on city-owned land and the other two were on land owned by developer Shawn Kaleta without permission.

Bearden had reported the yanking of the signs as theft. Indeed, candidates in other parts of the state faced criminal charges for similar action, and theft of signs is a misdemeanor punishable with 60 days in jail or a $500 fine.

Whitmore and Bearden face each other in a Republican Primary for the at large County Commission seat she has held since 2006.

At her press conference, she took the opportunity to call out Bearden on other controversies, such as the fact that two individuals filed as write-in candidates in the race — Robert Lesher and Manuel Llamas — have been seen campaigning for Bearden. Lesher told the Sarasota Herald-Tribune he filed to close the GOP Primary so only registered Republicans could vote in the August Primary.

But Bearden said Whitmore was redirecting discussions from the issue of her committing a crime.

“Carol’s accusation is completely fictitious and manufactured. It’s almost as good a fiction of her lying about turning herself in,” Bearden said.

But Whitmore pointed to a local ordinance still on the books in Holmes Beach. That local law states political signs may not be erected more than 45 days prior to an election. The GOP Primary is scheduled for Aug. 23.

Bearden seemed to echo comments made by Holmes Beach Police Chief William Tokajer to the Anna Maria Islander that the sign ordinance may be unenforceable.

The U.S. Supreme Court in 2015 ruled unanimously on a case involving an Arizona town ordinance that any regulations on signs in the country must survive a “strict scrutiny” analysis in court.

Regardless, city officials have said it is local officials at City Hall who must enforce local ordinances, not citizens.

It’s been a litigious week in Manatee County politics. County Commissioner George Kruse this week was charged with a DUI related to a traffic stop in June.

nextNo Christmas in July, but Disney is already preparing for holidays