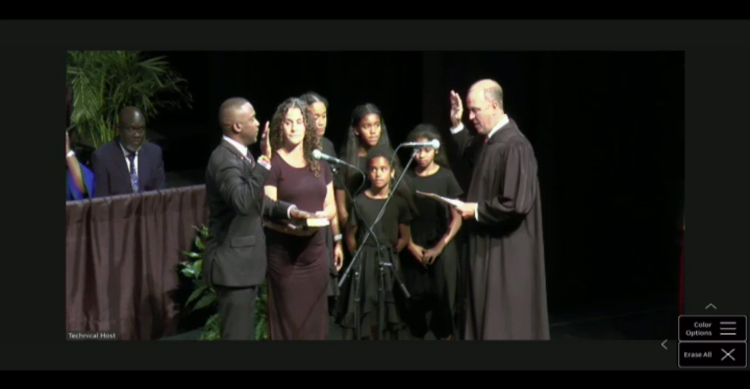 Rick Scott appointed him to the Council less than five years ago.

Republican Terrance Freeman began his service to the City of Jacksonville in 2015 as the assistant to City Councilman Aaron Bowman.

Freeman, Vice President for the last year, was installed into the position Friday at the Ritz Theater. He faced no competition for the presidency.

Freeman recognized the historic nature of serving as VP with Sam Newby — the first time two African American Councilmen served at the same time in that role. He also offered homage to his wife and “his daughters who grew up in City Hall” over the years.

“I live for you,” he said, saying that’s why he “got into this policymaking world, as tough as it gets sometimes so that I have a role in shaping the future of this great city.”

He also recognized the departed former Council President Tommy Hazouri, quoting his saying: “So let it be written, so let it be done.”

Freeman noted that eight people are running for re-election and six for another elected office.

“Our city is in a time of transition, but we must serve and deliver for the people,” Freeman urged. “We have a story to tell as a Council.”

Freeman also wants the Council to address “tough issues” and that he would “lead in these moments with compassion … modeling a firm but fair approach.”

Look for an initiative coming on apprenticeship, in partnership with the Kids Hope Alliance, helping to match talent to internships and other job opportunities.

“The journey in the political arena has been tough,” Freeman said, saying he was “enlightened and shocked” by infrastructure issues in his appointed district, driven to “correct the problems.”

“We took steps in the right direction,” Freeman said. “It all started by being present.”

Freeman became emotional at times throughout his remarks, cognizant of the past and the future of Jacksonville, diverging “into one path, where we walk our talk … because we are truly One City, One Jacksonville.”

Currently an at-large Councilman in his first term, Freeman was first appointed to the Council by former Gov. Rick Scott, who chose him and Democrat Ju’Coby Pittman in 2018 to fill seats vacated by the suspension of two indicted Council members. Ahead of the Council vote for his presidency, she seconded his nomination.

He did not run for election in District 10, to which he was appointed, but ran at large in the 2019 election. He currently is unopposed on the 2023 ballot, for what would be his second and final term on the Council.

Republican Ron Salem, another at-large Councilman, is the new Vice President. He was also elected without opposition. His son, a judge, swore him in.

Salem reflected on “meaningful accomplishments,” including squelching the attempted sale of JEA and subsequent JEA charter reforms and even went farther back than his tenure to laud the expansion of the Human Rights Ordinance in 2016 to include the LGBTQ+ community.

Such accomplishments and many others “demonstrate the talent and leadership on this Council,” and suggests to Salem the current year’s could be “one of the most significant since Consolidation.”

Salem does face a Democratic challenger in 2023, with former state House candidate Joshua Hicks running for Salem’s own at-large seat. However, it’s anyone’s guess how much help current Democrats on the supermajority GOP Council will be in flipping that seat; Democrat Pittman seconded Salem’s VP nomination earlier this year before that unanimous vote.

Outgoing President Sam Newby, also a Republican at-large Councilman, reflected on his divinely-driven recovery from COVID-19 in 2020 in his final speech as President.

“He took me from being a patient to the presidency. Only God can do something like that,” Newby said.

“I call him a little brother. He calls me a trailblazer,” Newby said. “I know you’re going to do a great job.”