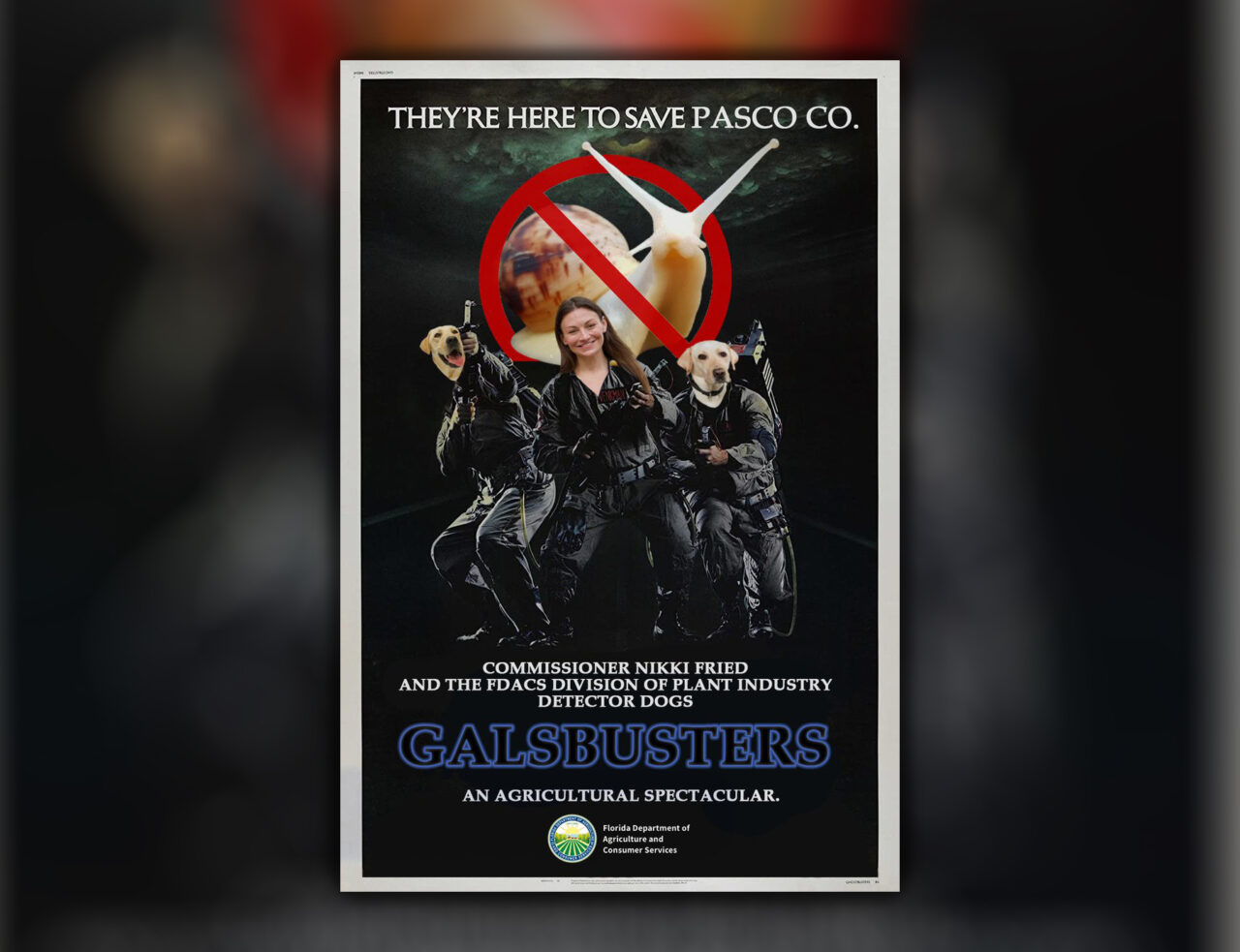 More than 1,000 snails of the most destructive species — illegal in this country without a permit — have been found in Pasco County.

More than 1,000 snails categorized as the most destructive have been found in Pasco County, and efforts are underway to stop their invasion — starring Agriculture Commissioner Nikki Fried as the lead snail-buster.

Giant African land snails (GALS) are part of the European pet trade, and they are illegal without a permit in the United States. That’s because in the wild, these 8-inch masters of disaster can quickly wear out their welcome. They consume 500 different plant species, have an appetite for stucco that can damage houses, and pose a health risk to humans. As carriers of the parasite rat lungworm, they can spread meningitis to humans and animals, according to the state Department of Agriculture and Consumer Services (FDACS).

Agriculture Commissioner Fried was in Pasco County Thursday to detail efforts to stop the snails from oozing too far from the quarantined area, inland Pasco County.

“Let me assure you, we will eradicate these snails,” Fried said. “We’ve done it twice before and we will do it again.”

The first GALS detection was in 1969 and the species’ eradication was announced in 1975. They were detected again in 2011 in Miami-Dade County. This time, eradication was declared last October. But on June 24, a New Port Richey gardener came upon one and contacted authorities.

Anyone else who sees them should follow suit, Fried said.

“I would like to stress how dangerous these creatures are, please do not try to handle them yourselves,” Fried said.

A quarantine means that no one should move plants, plant parts, plants in soil, soil, yard waste, debris, compost or building materials outside a rectangle of Pasco County. The quarantine area is roughly bounded by the northwest corner of U.S. 19 and Ridge Road, south to Trouble Creek and U.S. 19 and east to Little Road and Trouble Creek Road.

Raising awareness and getting people to abide by a quarantine prompted the FDACS to tweet a photo styled after the iconic “Ghostbusters,” movie poster. Only Fried was in actor Bill Murray’s spot, and flanked by two snail-detecting dogs’ heads superimposed on the bodies of the other two Ghostbusters stars. Instead of a ghost in the background, a brown-and-white-shelled snail looms.

Fried did not reference her current run to be the Democrats’ nominee for Governor at Thursday’s presentation, but the FDACS Twitter account did hear from the staff of the Republican Governor she is seeking to replace.

“Why is she glorifying ASSAULT WEAPONS?” Christina Pushaw, DeSantis’ spokeswoman, tweeted at the poster.

Fried, who is also down in the polls in her race, said the snail menace calls for different approaches that will get on people’s radar.

“We do take this very seriously and … whatever it’s going to take to bring attention to this situation, it has to be creative and outside the box,” she said.

Anyone who thinks they spotted one of these snails should call 888-397-1517. The department also has a snail identification sheet to help residents figure out whether to raise the alarm.

nextLast Call for 7.7.22 — A prime-time read of what’s going down in Florida politics