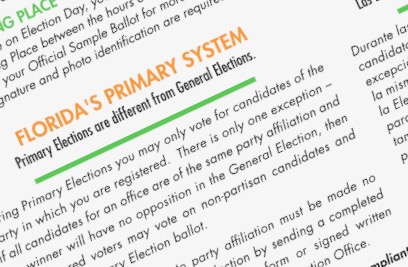 Orange County Supervisor of Elections Bill Cowles is making wording changes in voter instructions after candidates in nonpartisan elections protested that prior wording could discourage voters in the Primary Elections.

The wording, they contended, could mislead some voters into thinking they cannot vote in the Primary Election on Aug. 23, even though some of the contests, including the Mayor and School Board elections, are nonpartisan, and therefore open to all voters.

“Misinformation was sent to Orange County voters,” Messina and Barton charged in a news release issued in advance of a news conference.

“We are concerned that the net effect of this notice is to direct NPA voters to stay home on Aug. 23,” Messina said in the release.

Cowles said he had received complaints on the wording from a total of three candidates.

Without conceding that the previous wording is misleading, Cowles said he is making immediate wording changes, both on future voter registration card information sheets, and on his office’s website.

He said his call center staff is being instructed on how to respond to any confusion about the wording. And he pledged to include clarifying language in voter instructions that will be mailed with sample ballots in August.

“The clarification is already being implemented,” Cowles said.

Still, Cowles said he considers voter confusion from the wording to be unlikely. He said his office has not been advised of a single incident of a voter expressing confusion over voting in nonpartisan elections.

A letter from the Supervisor of Elections’ General Counsel Nicholas Shannin declined Messina’s and Barton’s further request that Cowles issue another round of registered voter cards with clarified language.

Barton expressed concern that the changes being made now are mostly to assist those voters who are actively seeking clarification. He said not enough is being done to reach anyone who might already have concluded they cannot vote in the Primary Election, particularly independent voters.

“There will be no proactive dispersal … until some time in August. Which means we’ve risked losing some of our NPA absentee voters and some of the others who are going to be mail-in,” Barton said.

Orange County’s current situation could become an issue for Supervisors of Elections anywhere in Florida.

“During Primary Elections you may only vote for candidates of that party in which you are registered,” the contested Orange County information had stated. “There is only one exception — if all candidates for an office are of the same party affiliation and the winner will have no opposition in the General Election, then all registered voters may vote on non-partisan candidates and issues on a Primary Election ballot.”

Messina noted there are 41 races on the Orange County Primary Election ballot that could be decided on Aug. 23.

That includes his and Barton’s contests.

Messina is challenging Orange County Mayor Jerry Demings, who is seeking a second term. There are two other challengers, Tony Sabb and Kelly Semrad. If no one gets more than 50% of the vote on Aug. 23, the top two will go to a runoff election Nov. 8.