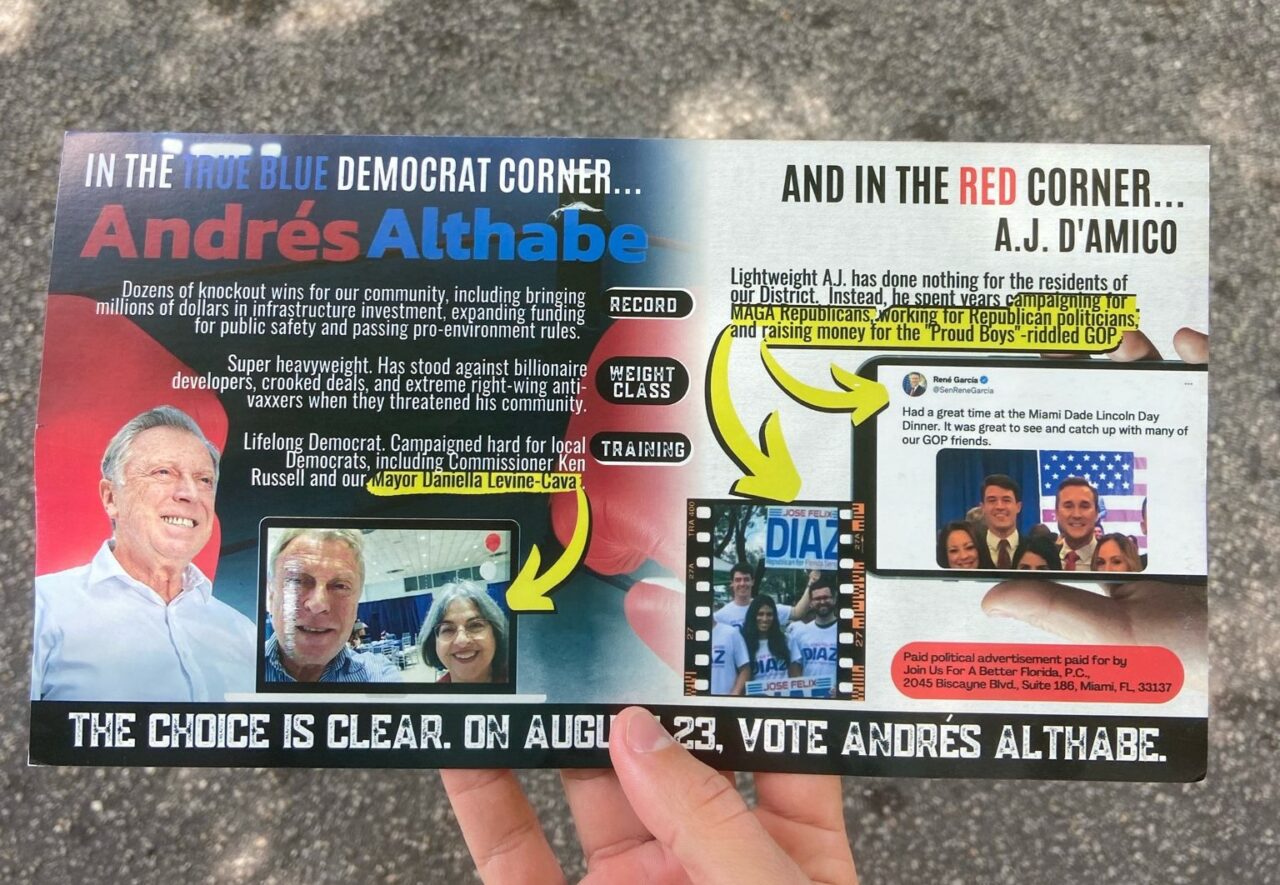 ‘Should you fail to abide by her request, she will exhaust all legal options.’

A recent mailer sent to voters includes a picture of Levine Cava with Biscayne Neighborhood Association President Andres Althabe, who is running for the open seat representing House District 113. The ad says Althabe campaigned for the Mayor, but it does not say she endorsed him.

“Although the Mayor respects your candidacy and values your support, it is her intention to remain neutral in this Primary Election,” Planas wrote. “As such, Mayor Levine Cava wishes NOT to have her image used in any manner that could give the impression of her endorsement when she is neutral in this Democratic Primary.”

Planas, who works as Levine Cava’s political legal counsel, demanded Althabe discontinue using photos of her until she says otherwise. He threatened to sue if the warning went unheeded.

“(The) Mayor is kindly asking that you further refrain from using her image as part of your campaign,” the letter said. “Should you fail to abide by her request, she will exhaust all legal options to enforce the statute that prohibits the use of her image without permission.”

Planas’ letter may be misdirected. A disclaimer on the ad states it was paid for by Join Us For A Better Florida, PC, a political committee whose listed address is for a UPS Store in Miami’s Edgewater neighborhood.

It opened in May with Chair Sue Nelson and Treasurer Daniel Perez. So far, a payment to that UPS Store is its only listed expenditure through July 22.

The PC has raised $11,000. Of that, $6,000 came through a pair of donations from Truth is the Daughter of Time, a political committee run by lobbyist and former Miami City Commissioner Marc Sarnoff that also gave Althabe $1,000 in April.

This is the second time in just over a week that Levine Cava has told a candidate for public office to stop using pictures of her for political gain. On July 22, Planas sent another cease-and-desist letter to Sophia Lacayo, a Republican former City Commissioner of Sweetwater now running for the Miami-Dade County Commission.

Lacayo — who resigned from the Sweetwater Commission in 2020 over a perjury charge after it was revealed she had lied about living in the city ahead of its election — used pictures of Levine Cava and Annette Taddeo, a state Senator who is running for Congress, in a campaign flier.

Both Levine Cava and Taddeo are Democrats. Lacayo is a Republican. While Planas’ letter stated only that the Mayor “does not endorse” Lacayo’s campaign, Taddeo took it one step further on Twitter to deny she was affiliated with Lacayo.

“Nothing could be farther from the truth,” she wrote before asking her followers to support Lacayo’s opponent, Republican Doral Mayor Juan Carlos Bermudez.

The winner of the contest between Althabe and D’Amico will face the victor of a Republican Primary between government and public affairs consultant Vicki Lopez or self-funded candidate Alberto Persoch in the Nov. 8 General Election.

HD 113 covers a central portion of Miami-Dade, including the municipalities of Coral Gables, Key Biscayne and Miami. The district’s current Representative, Michael Grieco, announced in June that he wouldn’t seek re-election.

previousGOP House candidate Scott Moore claims he's a lifelong Republican, but bailed on the party in 2016