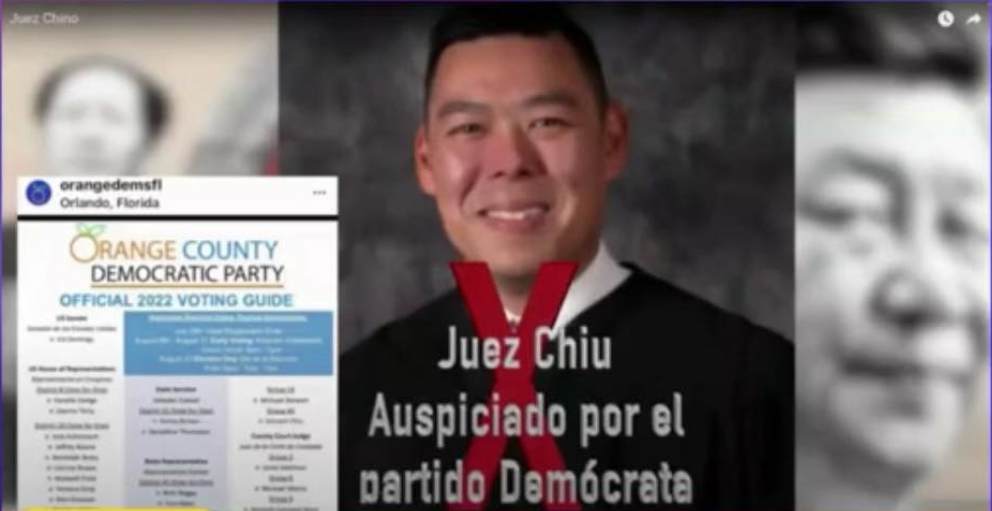 A Republican political consultant’s depiction of an Asian American Circuit Court Judge together with pictures of Chinese Communist Party leaders Mao Zedong and Xi Jinping is being roundly condemned by Asian-American groups, Democrats and others.

Winter Garden consultant Xavier Villacis posted the trio of pictures, with Circuit Judge Vincent Chiu in between Mao’s and Xi’s pictures, with the Spanish words for “Chinese Judge.” A red “X” slashes through Chiu’s photograph.

Bartolone disavowed the message as “reprehensible” and fired Villacis.

Statements from several Asian American groups and others, including the Greater Orlando Asian American Bar Association and the Wah Lum Kung Fu Temple of Orlando, condemned Villacis’ communication. Was Lum Temple called it “inexcusable,” and added, “Such racially charged images only serve to divide our community by spreading misinformation about Asian Americans and perpetuating stereotypes.”

Chiu issued a statement reading, “I am saddened that a paid staffer from my opponent’s campaign has engaged in such racialized attacks against me, especially in a judicial campaign. … These attacks are nothing new to people of color and show how much work remains to be done in our society. But the way our community stands together against such attacks shows how far we have come.”

“Neither I nor my campaign were aware of or had anything to do with the content of Villacis’ radio program where he published such a reprehensible image. Once I was made aware of what he had posted, Mr. Villacis was immediately terminated, I demanded that all such content be removed from whatever platforms where it was posted, and that he issue a statement clarifying that my campaign was not involved, in any manner, with the horrific opinions expressed on his show,” Bartolone said in a statement. “In a judicial candidate forum on Monday, I publicly condemned the conduct and content of his publication.”

“I support and stand with the AAPI community in their outrage,” Bartolone added.

The Orange County Democratic Party also condemned the post. Chair Wes Hodge also called out other communications from Villacis — including other social media posts and comments he has made on a streaming radio show he hosts — which Hodge said have depicted Democrats as communists, “groomers” and even murderers.

Reached about the “Chinese Judge” post, Villacis said it was not done on behalf of Bartolone’s campaign, though it attacked Bartolone’s election opponent. He said it was only a personal comment of his personal opinion. He confirmed that Bartolone fired him when he heard about it.

Villacis defended his post and said it was being misconstrued. He said he wasn’t intending to imply that Chiu was like Mao and Xi because they are all Chinese. He said he meant to imply that all Democrats are like Mao and Xi because he believes they all support communism. Since the Orange County Democrats endorsed Chiu for re-election, he must be called out.

He also denounced Democrats for supporting LGBTQ rights and abortion access rights, his cited reasons for his comments about groomers and murderers.

Villacis did not offer any credible, concrete explanation for why he says Democrats are tied to Chinese communists.

Division of Elections records show that XV Group had only two other clients this election cycle, at least through the most recent reports of July 22. They were Republican Carolina Amesty of Orlando, who is running for House District 45; and JC 9 judicial candidate Michael Stewart of Orlando, who is contesting another incumbent judge in Orange County, John Beamer.

Both have cut ties with the agency.

Replying to a text inquiring about Villacis, Amesty said, “Xavier no longer works for my campaign since early July.”

When asked if she fired him and if Villacis’ communications were seen as inappropriate, she replied, “No. We didn’t fire him per se because he was never an employee. It was a fee for on-line advertising analysis for researching Hispanic voters and ads to Hispanic events.”

Stewart replied, “The Michael Stewart For Circuit Court Judge Campaign no longer has a contractual relationship with XV Group. The campaign has no further comment.”

“It’s really disgusting. It’s beyond what I would consider decency or normalcy,” Hodge said of Villacis’ communications. “It’s racist, homophobic.”