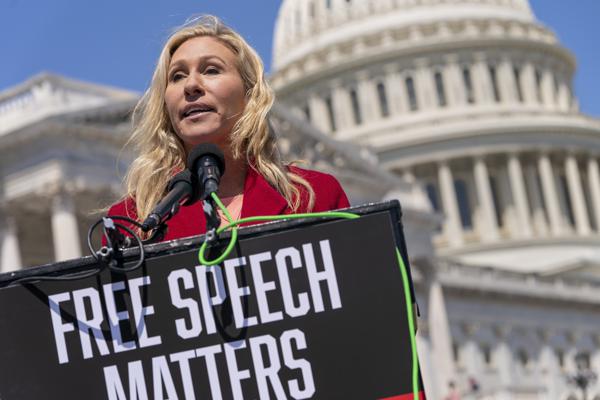 'I want to pack our venue with America First patriots who want to DESTROY the deep state this November.'

Republican U.S. Rep. Marjorie Taylor Greene of Georgia may not have any committee assignments, but she’s become a coveted campaign trail presence for congressional hopefuls. She will campaign in the coming days for Howey-in-the-Hills Republican Anthony Sabatini and St. Petersburg Republican Anna Paulina Luna, their respective campaigns announced.

Sabatini, a state lawmaker running in Florida’s 7th Congressional District, announced Greene will speak in support of his candidacy at an America First Rally in Volusia County. Details are still pending.

“I want to pack our venue with America First patriots who want to DESTROY the deep state this November,” Sabatini said in a mailer announcing the rally.

Both Sabatini and Greene brand themselves as Donald Trump-style Christian nationalists. Sabatini controversially headlined a nationalist convention in Tampa. Greene recently made headlines for openly embracing the term as “nothing to be ashamed of.”

She formally endorsed Sabatini, who faces a crowded field of Republicans aiming to flip CD 7 red.

“I am proud to announce my official endorsement of Anthony Sabatini for Congress. Anthony is a proven conservative fighter we can count on and the most pro-Trump champion in Florida’s state legislature,” she said.

“He isn’t afraid to take on the establishment. He stopped vaccine passports in the state. He is 100 percent pro-life and pro-Second Amendment. He believes in the America First agenda. He supports building the wall. He is the leader for election integrity in Florida and demanding an audit of the election results. And, he has agreed to support my efforts to impeach Joe Biden.”

The district is now represented by Democratic U.S. Rep. Stephanie Murphy, who elected not to seek re-election. A new map signed by Gov. Ron DeSantis shifted the district to be much more friendly to Republicans. While Democratic President Biden won the prior configuration of the district by 10 percentage points, about 52.1% of voters living in CD 7 under the new lines supported Republican Donald Trump.

Similarly, the map moves Florida’s 13th Congressional District from a Biden +4 seat to a Trump +7 district. Luna won the 2020 Republican nomination to challenge Democratic U.S. Rep. Charlie Crist under the old lines. Now Crist is running for Governor, and Luna appears to be the front-runner to turn the seat red.

Luna announced Greene and Kimberly Guilfoyle, fiancée to Donald Trump Jr., will speak at a campaign event on Aug. 19.

Like Sabatini, Luna faces a field of Republicans running for the seat. An Aug. 23 Republican Primary will determine the nominees for both CD 7 and CD 13.