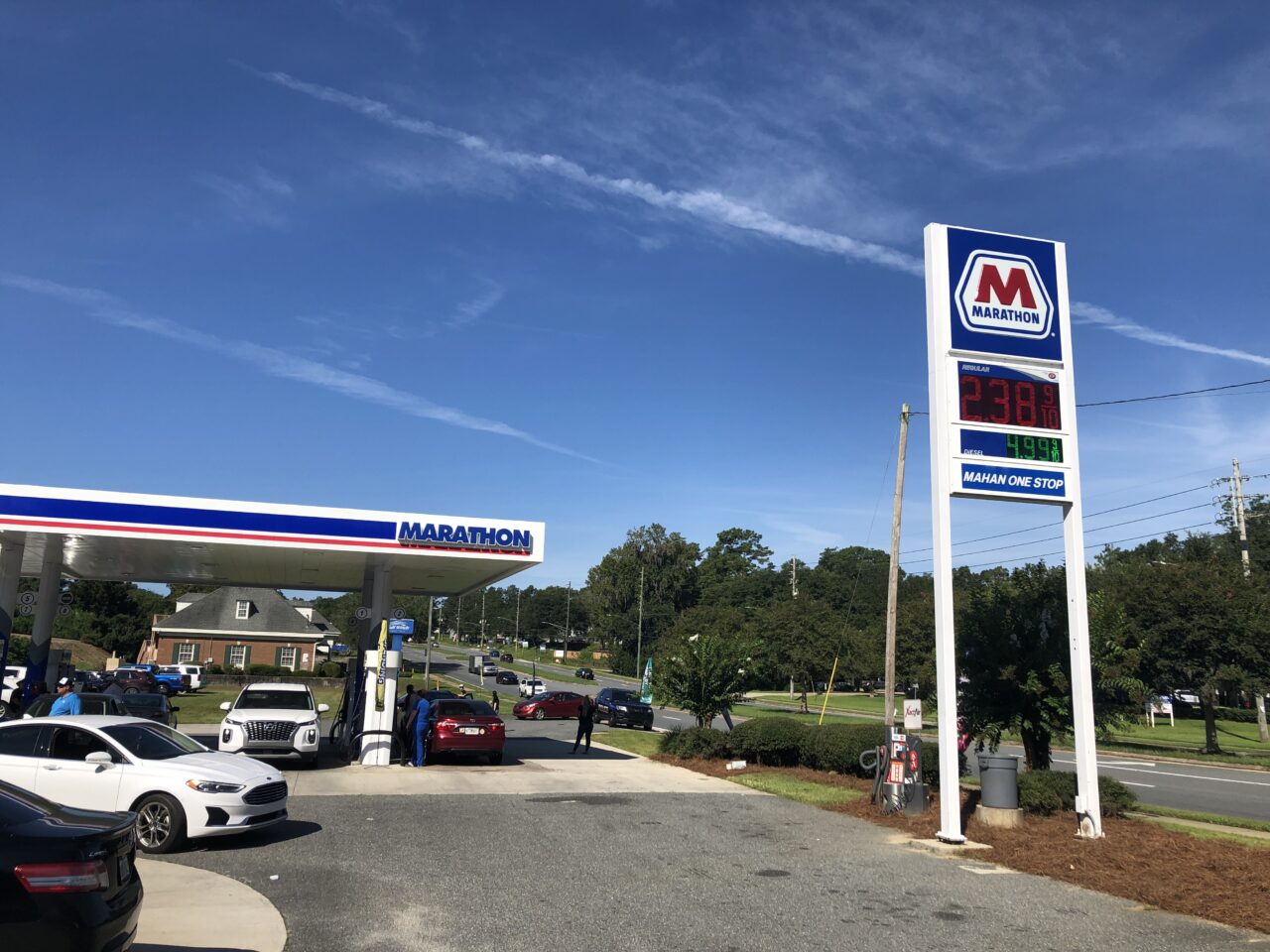 For just one hour, unleaded gas was back below $3 at one Tallahassee gas station this week.

Americans for Prosperity (AFP) brought its “True Cost of Washington” campaign to the Marathon gas station on Mahan Drive, catching the eye of passers-by with an enticing $2.38 displayed on its marquee. More than 100 customers got to pay that price per gallon Wednesday instead of the $3.64 that appeared later in the day.

Fiscal conservatives at AFP in April launched the campaign against “wasteful spending” by Congress and the rising costs of many everyday products, including fuel. Wednesday’s event marked the 10th of a dozen total planned stops throughout the state and one of more than 200 throughout the country. Other events have focused on inflation in supermarkets and other stores.

With the $2.38, AFP wound back time to the third week of January 2021, when that was the average price for a gallon of gas. Gas prices continue to fall in Florida since the peak of $4.89 mid-June, but the state average is still north of $3.50.

“That was the day that President (Joe) Biden took office and congressional Democrats took over Congress,” said Skylar Zander, state director of AFP Florida. “What we saw ever since they took office is they immediately focused on their agenda where they focused on ending the Keystone Pipeline on day one, they started ending leases on public lands on day one, and so those things have real ripple effects in the market and really restrict the ability to have our energy independence and gas abundance within the country.”

Zander wants to see Congress open more gas production and to send a signal to the market.

“We want to see Washington do what Florida has done really well and that is balance a budget and stop all the wasteful spending that they’re doing that’s driving up inflation,” Zander said.

Wilson Hinson, the distributor at the gas station, said he supports Americans for Prosperity and is a donor. A friend in Tampa reached out to him about bringing the campaign to Tallahassee. For him, the benefit is advertising and hopefully securing repeat customers.

Hinson said he supports the conservative movement and is for “America first, not last.” However, he doesn’t see that factoring in to his customers.

To not run afoul of the law, AFP is paying the difference in each sale.

AFP paid for 1,236 gallons worth of gas from 9:30 a.m. till 10:30 a.m. Each pump had an attendant, but they weren’t there to fill customer’s tanks. They were there to help explain their mission to their captive audience, encourage voters to research their candidates and hand out swag that read “Pay more. Get less.”

Serena Simmons, a Black woman who works at Tallahassee Memorial HealthCare and Goodwill, stopped to fill her tank when she noticed gas prices she said he hasn’t seen in months. Despite her two jobs, paying for gas has been difficult.

Rising rent only complicated her situation. Her rent in Madison was set to go up hundreds of dollars, so she opted to cut the commute and move back to Tallahassee. But she’s also had to dial back her travel and time off.

“I’m saving up to go to the mountains for the Christmas season,” Simmons said.

Simmons says she is an independent voter who leans toward Democrats. She voted during the 2022 Primary Election and already has an idea of who she’ll vote for in the General Election. However, she said she has some reservations and, like the AFP attendant told her, plans to do more research.

Zander noted some customers comment on the politics, but most are just happy about the gas prices.

“Center right folks have a hard time reaching out to minority communities and different types of communities, or that’s what at least a lot of the media gives us,” Zander said. “But this is an opportunity to to reach those demographics, and as you see, it’s a very diverse group here and cheap gas doesn’t discriminate.”

previousSt. Pete Deputy Mayor resigns after being accused of bullying