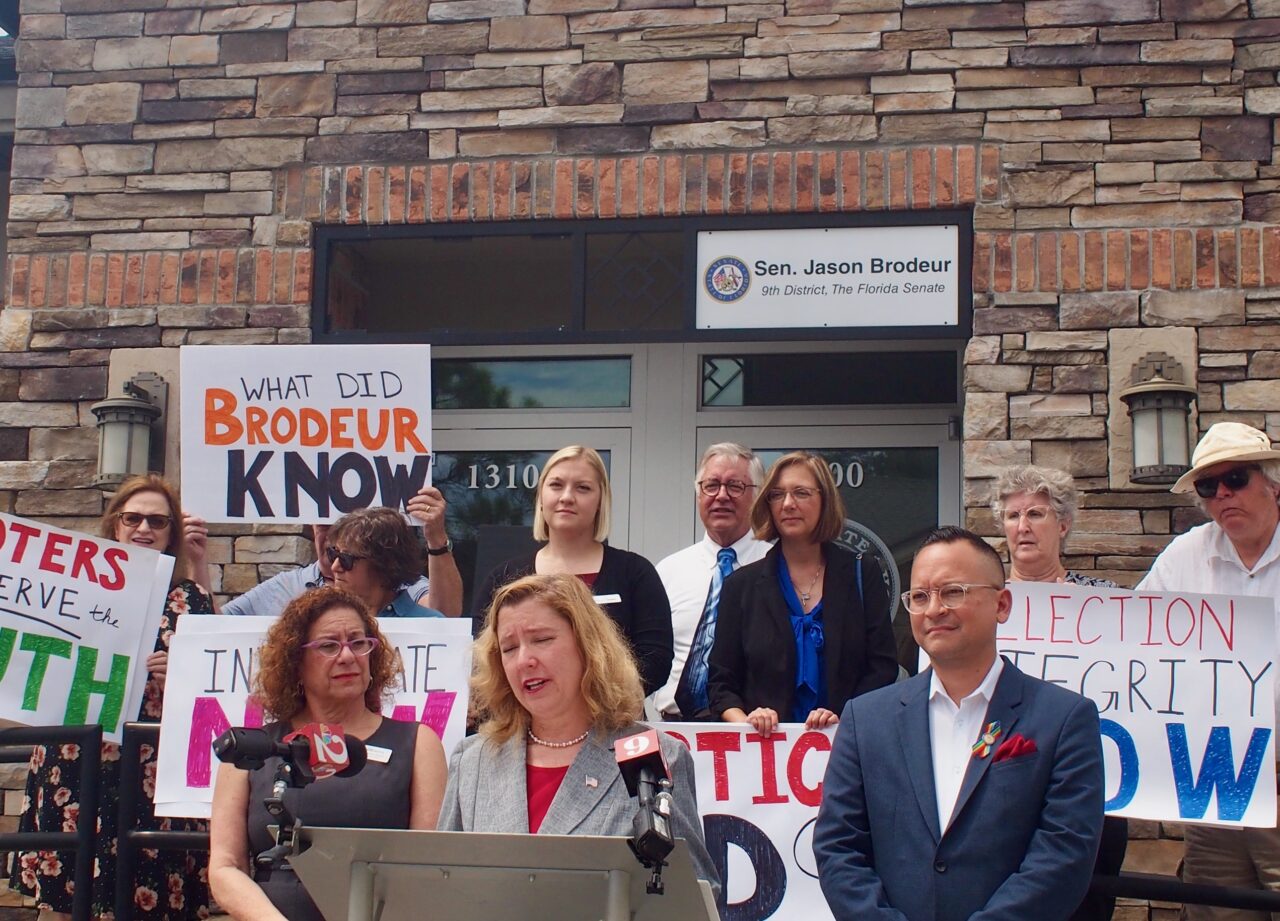 Democratic Rep. Joy Goff-Marcil and other Seminole County Democrats called for her 2022 Senate election opponent, Republican Sen. Jason Brodeur, to drop out of the race, resign from the Senate and be investigated by the new state elections police office.

Goff-Marcil was joined on the steps of Brodeur’s Lake Mary office by Democratic Rep. Carlos Guillermo Smith, Seminole County Democratic Party Chair Lynn Dictor and several Democratic candidates. They gathered after the latest news reports in the Orlando Sentinel suggested Brodeur likely was aware of a “ghost candidate” scheme that has led to this summer’s arrest and conviction of Seminole Republican Party Chair Ben Paris, Brodeur’s assistant at the Chamber of Commerce, for a misdemeanor charge of laundering campaign finance money for the candidate.

Brodeur was not present while the Democrats’ press conference took place in front of his office. He did not respond to Florida Politics’ requests to respond.

With the newly reported allegations, and with word that Brodeur’s employer and Paris’ former employer, the Seminole County Chamber, was now investigating, Goff-Marcil reiterated a demand she made last week that Brodeur drop out and resign from the Senate.

On Thursday, Goff-Marcil, Smith, Dictor and the others expanded on that call. Smith said they would be formally filing a complaint with the new Florida Election Crimes and Security Office — created earlier this year when Gov. Ron DeSantis signed SB 524 — about whether Brodeur was involved in the “ghost candidate” scheme in his election.

“The integrity of Central Florida elections is at stake and the voters of Senate District 9 deserve the truth,” Goff-Marcil said. “In 2020, hundreds of thousands of dollars of dark money was used to deceive the public for Brodeur’s gain, propping up a ‘ghost’ candidate who qualified under highly suspicious circumstances.”

Goff-Marcil, a two-term Representative from Maitland, is challenging Brodeur in the 2022 election for the newly drawn Senate District 10. Brodeur was elected to the Senate in 2020, in the old Senate District 9, in a close election that included a “ghost candidate” promoted by Paris to try to siphon votes from Brodeur’s Democratic opponent that year, Patricia Sigman.

Paris was convicted of illegally funneling money to the campaign of independent candidate Jestine Iannotti, who also has been charged in the case, along with political consultant Eric Foglesong. Neither of them has been tried.

“So, one of two things are true: either Jason Brodeur was totally in on those crimes that got him (Paris) arrested; or two, he simply completely chose to surround himself with people who would carry out the plan to defraud the voters. And neither option is acceptable,” Goff-Marcil said.

“Seminole County has been plagued for decades with a local Republican Party that has lived in the shadows,” Dictor charged.

“In 2020 hundreds of thousands of dollars of dark money was used to deceive the voters — to deceive us — by recruiting and propping up a ghost candidate who had no intention and had no intention to serve. This ghost candidate was put in the race by Jason Brodeur’s friends and we now learn what we suspected all along: that Brodeur himself was, to borrow a line from “Hamilton,” in the room where it happened.”

They belittled the Florida Election Crimes and Security Office for thus far ignoring “what is right underneath our noses, election corruption, campaign finance corruption, corruption of public policy by our public officials, and so much more,” Smith said.

And they praised the media — particularly The Sentinel — for doing the investigating that the state officials would not.

“The GOP Chairman of the Seminole County Republican Party, who purports to care about election integrity will now resign in disgrace because of his role in this election conspiracy. But is that it?” Smith asked.

Both of the criminal investigations continue.

State investigators in the Paris case still are pursuing a case against Foglesong. They interviewed Greenberg, which led to the recent revelation: a statement by Greenberg that Brodeur was in the room where the “ghost candidate” scheme was planned.

Federal investigators have been negotiating for over a year with Greenberg to pursue alleged political corruption and sex trafficking crimes against others, in a case centered in Seminole County.

“That’s the big question,” Goff-Marcil said. “Based on the redacted transcript (of the Greenberg interview) that everybody is trying to navigate through, yes, I think we’re all wondering and pondering that question.”