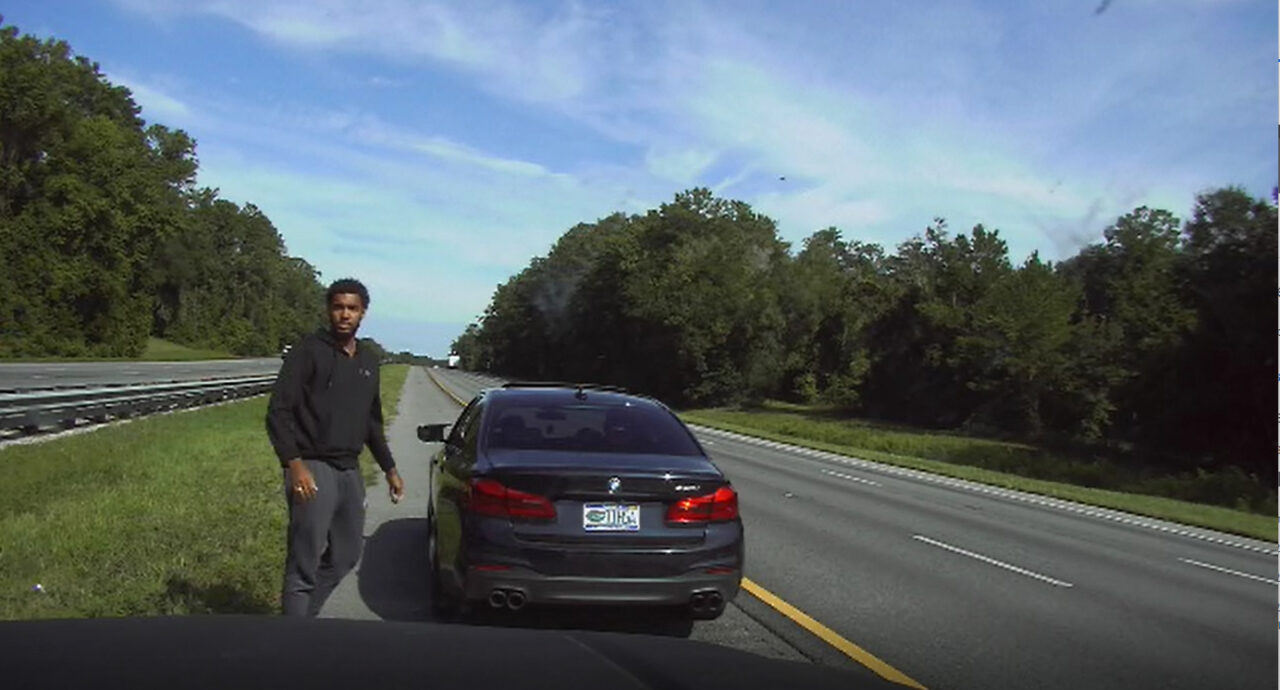 'I know that I was speeding, but I do not think the manner in which I drove was reckless.'

Ticketed for speeding 116 mph on a crowded stretch of Interstate 75 in this college town, a University of Florida student told the trooper the reason for his fast driving: He didn’t want to be late for class on the first day of the fall semester.

Just his luck, he said he found out later that morning his professor had canceled his physics lecture that day.

Joseph D’Andre Melhado, 20, of Pembroke Pines in South Florida, was ticketed with speeding and reckless driving after a Florida Highway Patrol trooper said he saw his BMW sedan weaving among three lanes of crowded, late-morning traffic on I-75 at triple-digit speeds.

“You’re reckless, man. You’re going to get somebody killed,” Trooper D.M. Morgan told Melhado, according to police video of the traffic stop. “I’m debating taking you to jail for reckless driving. Why are you doing that? Why are you driving so stupid?”

“I was honestly just trying to make it to class,” Melhado said, apologizing.

In an interview Tuesday evening near campus, Melhado said he is considering a legal fight over the reckless driving charge in court because — although he acknowledged he was speeding — he was using his indicator to signal his lane changes and does not believe he cut anyone off.

The video showed Melhado passing a slower car on the right from the center lane, then moving left using his turn signal across two slower lanes of traffic backed up by tractor trailers as the trooper chased him at speeds of 110 mph.

“I know that I was speeding, but I do not think the manner in which I drove was reckless,” he said.

Melhado said he was driving back to Gainesville from Orlando with his cat, Nardo. He intended to stop at his apartment to drop off the cat before driving to campus.

Melhado, a biology major, told the trooper his class was starting at 11:55 a.m., more than one hour after he was pulled over at a spot about 15 minutes from campus. On the video, he seemed unaware how fast the trooper said he was driving. The speed limit there was 70 mph.

In the interview this week, Melhado said he didn’t realize the seriousness of the misdemeanor reckless driving charge.

“At first, I was under the impression that it would just be a civil citation and not a criminal charge,” Melhado said.

The traffic stop on I-75 took place on the first day of the university’s fall semester, Aug. 24, but the highway patrol did not provide video of the encounter until last week due to technical difficulties with the trooper’s cruiser. Melhado faces arraignment in Alachua County Circuit Court on Oct. 10 on the reckless driving charge and a hearing Oct. 12 on the speeding charge.

Melhado said he requested that an attorney from the university’s student legal services office contact the prosecutor and seek a deferred prosecution. Private lawyers he contacted estimated the case would cost Melhado about $2,000 in legal fees, he said.

During the traffic stop, the trooper told Melhado he had watched him weaving through traffic and around semi-trucks at speeds as high as 116 mph before the trooper chased him down with lights and siren about 10:20 a.m.

“Back there, coming over that hill, I had you in all three lanes, cut off several cars,” the trooper said.

“Yeah, I’m just trying to get prepared for some stuff,” Melhado answered.

Many university professors are especially lenient with class rules during the first week of the semester as students wrestle with limited on-campus parking, find their way to unfamiliar classrooms, cope with glitchy online services and finalize their course schedules.

The traffic stop delayed Melhado by 15 minutes on his way to the class that turned out to be canceled.

At the age of 17, Melhado was ticketed for traveling 61mph in a 35 mph stretch of Hollywood Boulevard in Broward County. The judge had ordered that Melhado perform 35 hours of community service and write a 500-word essay about what he had learned while attending the juvenile teen traffic court program in exchange for dismissing the speeding ticket.