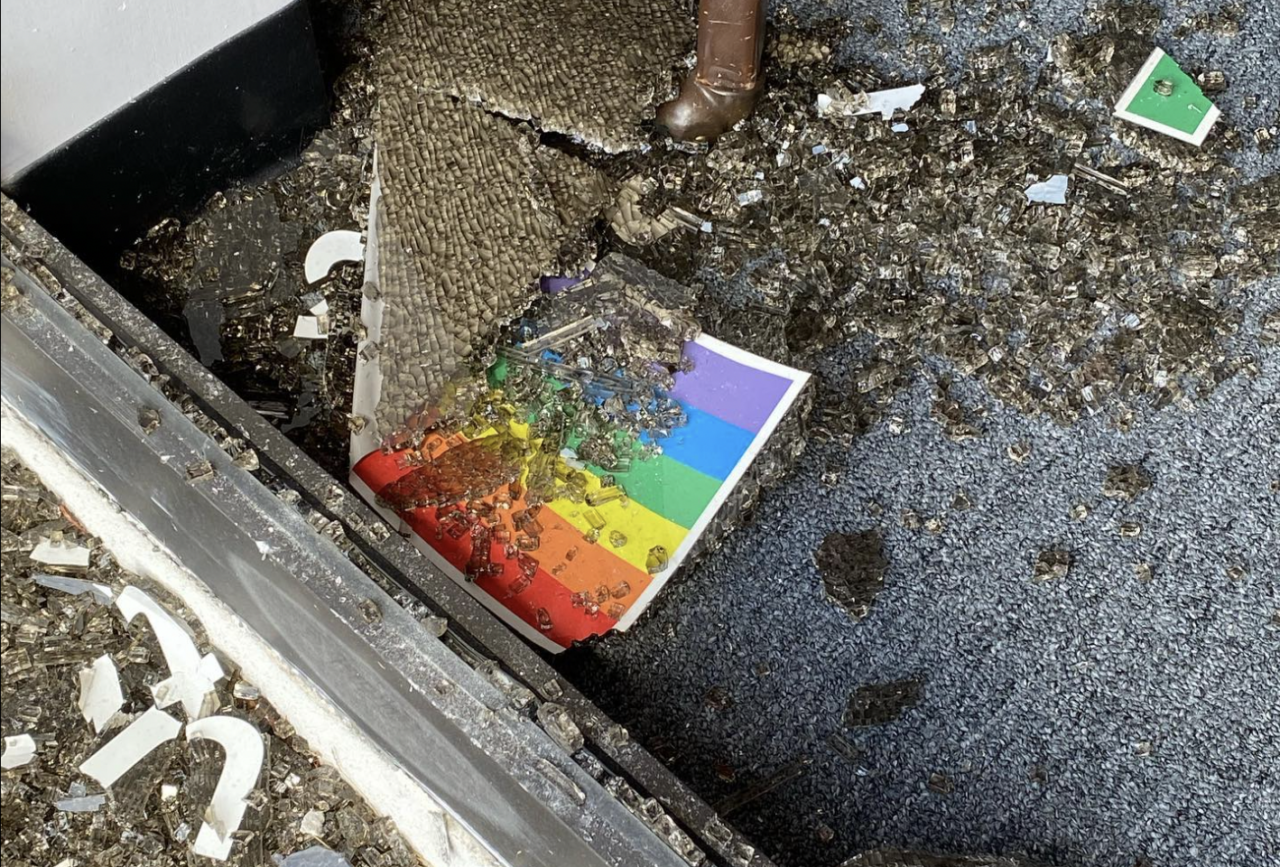 Officials at the center called out a “cowardly act of hate and violence.

Gainesville law enforcement is seeking information on vandalization of the Pride Community Center of North Central Florida. Officials at the center called out a “cowardly act of hate and violence.”

“I see this like the Charlottesville situation, though obviously that was much larger,” said James Maggio, Alachua County Democratic Party chair. “(Donald) Trump didn’t tell people to go to Charlottesville but he opened room to express those kinds of thoughts. That is what DeSantis has done here.”

The Pride Center shared photos on its Facebook page of a shattered glass in a door and front window to the facility. Inside, a curtain rod is shown that was torn to the ground. In another photo, debris surrounds materials on the ground including a rainbow-colored booklet in the lobby.

“The Pride Community Center of North Central Florida has been vandalized, with a rock thrown through the front door and window, accompanied by a hateful note. Thankfully no one was hurt and no property was stolen,” reads the post on the Center’s page on Sept. 24.

The note attached to the rock was not shared online.

“Volunteers have already begun work to clean up the broken glass and cover the openings to protect the Center ahead of the expected rainstorm,” the post continues.

The Center is accepting donations. The local Democratic Party intends to write a check to the center to help it recoup losses, Maggio said.

Officials noted the vandalism at the Center came less than a month before the Gainesville Pride Festival, which returns to the city on Oct. 22 after being canceled because of the pandemic in 2020 and 2021.

“We are heartbroken this has happened in our community, but we are undeterred,” the Facebook post concluded. “The Pride Community Center of North Central Florida remains committed to being a safe place, and this display of hatred has only strengthened our resolve to continue to show up with love for our beautiful LGBTQ+ community.”

The college town in fact has seen a rash of extremist actions, according to Maggio.

He said there were also recently fliers promoting antisemitism delivered to numerous houses in the area, tossed on steps in plastic bags and filled with corn. The planned-out messaging, Maggio said, was in some ways more upsetting than the acts of vandalism. The fliers included homophobic messages and used rainbow imagery attributing a “gay agenda” among Jewish people.

“It’s allowing a permissibility about targeting certain groups specifically anti-racist groups and anti-oppression groups, which the Stop WOKE bill does,” he said. “It allow those points of view to breathe more.”

The release from the party also cited a new law dubbed the “Don’t say Gay” bill by critics.