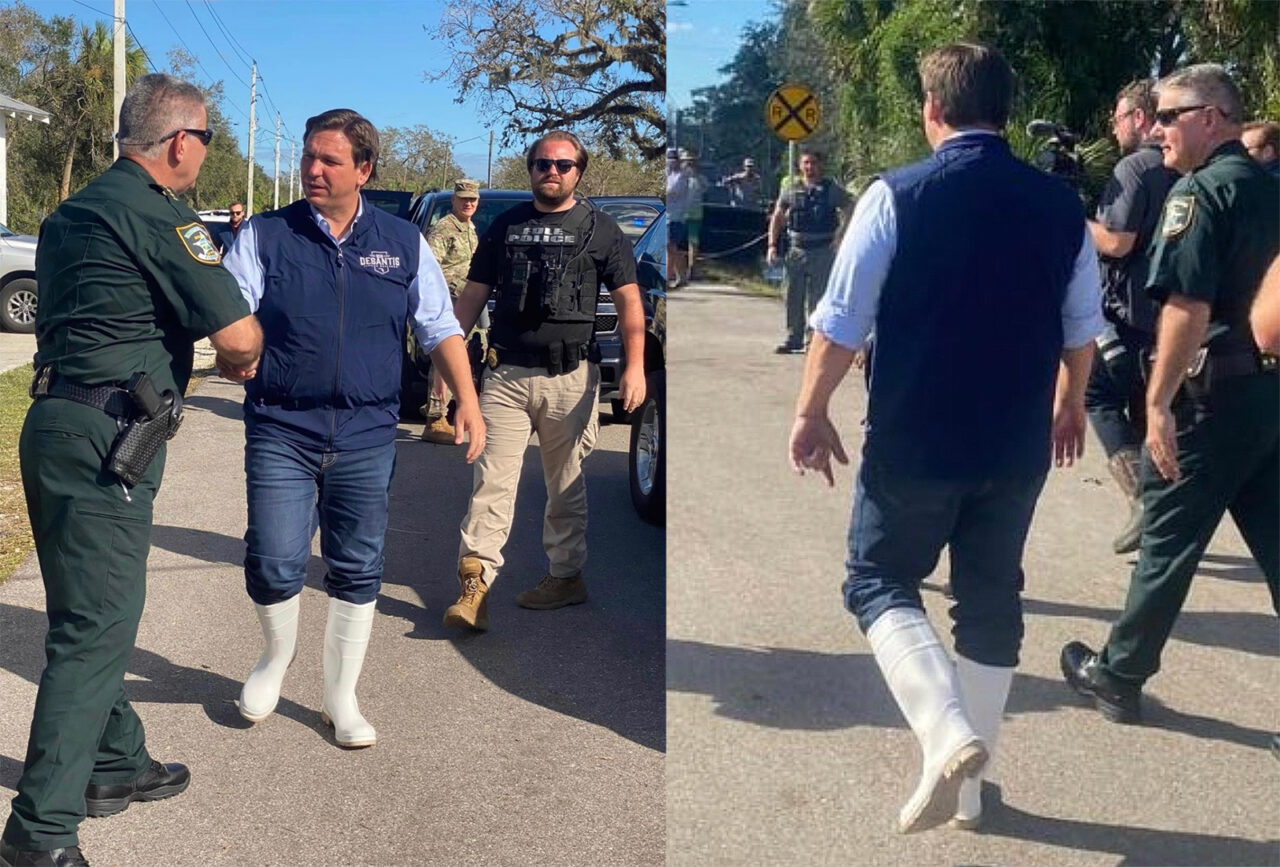 This is the second time in recent months that DeSantis has 'pulled a Dukakis.'

Florida Gov. Ron DeSantis was heavily criticized yesterday for showing up in the Fort Myers Beach area wearing campaign gear, stopping Hurricane Ian relief efforts for a photo-op, and then calling residents liars after they expressed frustration with the DeSantis-induced recovery delays.

But there also appears to be quite a bit of discussion about Ron’s tall, impeccably clean, white boots.

While many people have famously worn white boots in the past, like shrimp boat captains, Lt. Dangle in “Reno 911,” and of course, Nancy Sinatra, it was certainly surprising to see the Republican Governor surveying hurricane damage in what appeared to be the Green M&M’s boots.

As others have pointed out on Twitter, politicians have shown up to disaster areas in galosh-like boots in the past, but the decision to wear sparkling white, knee-high boots to survey storm wreckage is unique to DeSantis.

Of course, this is the second time in recent months that DeSantis has “pulled a Dukakis,” and sported something incredibly embarrassing. Back in August, the governor released a “Top Gov” campaign ad spoofing the new Top Gun: Maverick film, only to show himself wearing an odd-fitting helmet that closely resembled the popular “limecat” meme.

For the most part, DeSantis’ response to addressing the storm’s aftermath has been noteworthy, and his willingness to put aside politics and work with the Biden administration has also been admirable.

But for the moment, unfortunately, it appears that Ron “white boots” DeSantis is trending, and the jokes are piling up.

He looks like a 5-year-old made a governor at Build-A-Bear — and forgot the heart. pic.twitter.com/Knf7PvF9qq

When you interrupt your Nancy Sinatra tribute show for a photo op. pic.twitter.com/faFNe2UV8p

Who wore it best? pic.twitter.com/NMIn4RCv1Z

Ron DeSantis in his Nancy Sinatra boots is having his Mike Dukakis in a tank moment. pic.twitter.com/DG64xwsgFm

Ron DeSantis just couldn’t help it. He bought a pair of boots online that used to belong to the B-52s, and he just had to wear em! pic.twitter.com/vB1RLZxsOa

Why is Ron DeSantis strutting around FL in Buddy Pine's rocket-boots? pic.twitter.com/pZNJllU42x