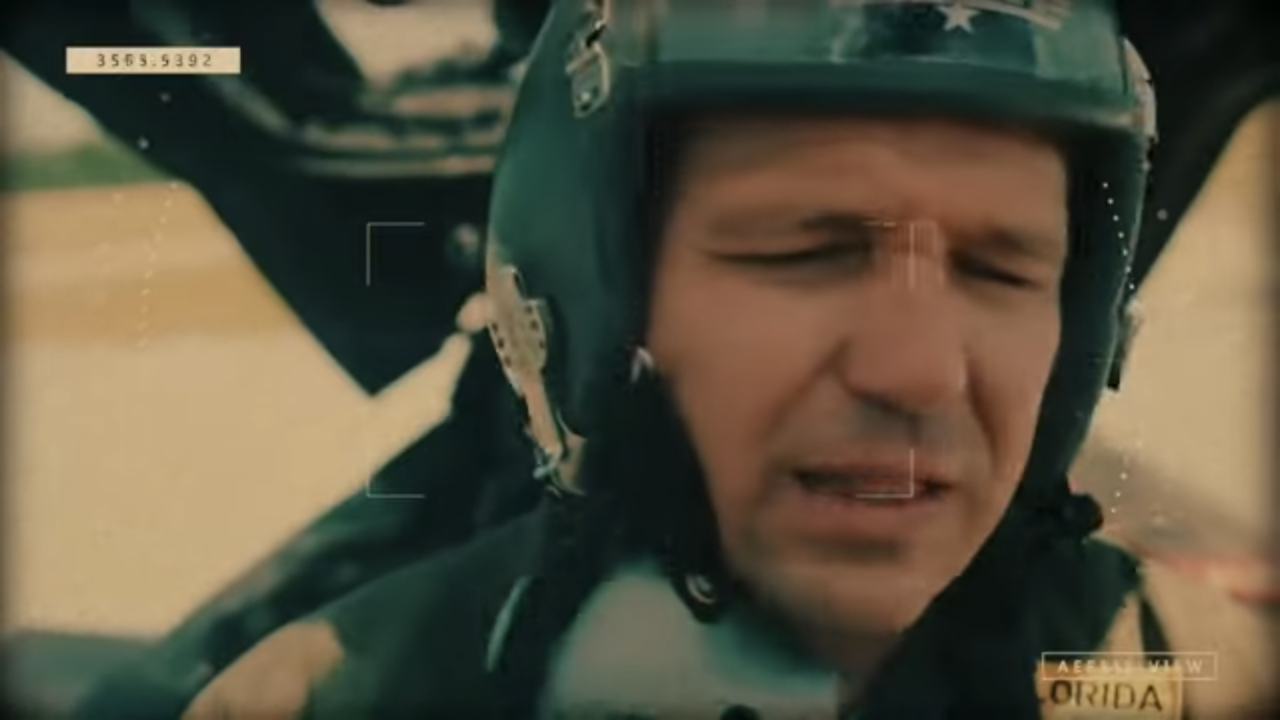 'Top Gun? This guy? Ron DeSantis is no Maverick.'

Florida’s Governor has spent much of the summer yoking his campaign to the reboot of “Top Gun: Maverick.” But for one group of critics, it’s been more like “Flop Gun” instead.

A new 30-second spot from the Lincoln Project, pithily titled “Poser,” unfavorably compares DeSantis to leaders in bygone times and their efforts in wartime, using the Governor’s latest homage (“Top Gov”) to the Tom Cruise film as a hook, with which they skewer the ad’s central concept.

“Republican leaders, bold men who took to the skies in service of America,” begins the voiceover, which lauds the wartime efforts of former President George H.W. Bush and former U.S. Sen. John McCain, before introducing DeSantis as an unfavorable comparison.

“‘Top Gun’ Ron DeSantis flew this,” the ad says, showing a picture of a work desk, a seeming allusion to his legal work in the military.

“Top Gun? This guy? Ron DeSantis is no Maverick,” the narrator closes. “He’s just a poser.”

The DeSantis ad launched on Primary Day, a move designed to sync with the streaming release of the summer blockbuster, as he told a national audience this week on Fox and Friends.

“So we came out with the Top Gov when the movie came out,” DeSantis explained. “The merchandise did really well. Now, because it’s coming out on streaming today, we figured there would be more interest in it. So I figured, ‘How could we do it?’”

The ad shows DeSantis explaining the art of “dogfighting” with “the corporate media,” with spliced-in footage of DeSantis belittling TV reporters along with shots of the Governor in a flight suit.

Comparisons of the ultimate effect of the visual have ranged, with numerous DeSantis critics striking unfavorable comparisons to 1988 Democratic Presidential candidate Michael Dukakis, who did a photo op in a tank with a military helmet on ahead of his loss to Bush later that year.

DeSantis has been co-branding around “Top Gun: Maverick” all summer, offering various assertions about the world that he somehow found a way to relate to the movie.

DeSantis, appearing on the Aug. 13 episode of the Glenn Beck Show, blasted the Department of Defense for not living up to the standards of the film.

“I take my son to watch ‘Top Gun: Maverick,’ right? And you’re proud of seeing the pilots and all that. Then in real life, what’s the Navy doing? They’re focusing on pronouns and all these other things, this woke garbage, while China’s laughing at us,” DeSantis lamented.

He even lauded the movie on spec, before he saw it.

“I do want to see it at some point. I think it’s just, you know, it’s like any movie that’s not, like, overwhelmingly woke can actually appeal to normal people,” DeSantis said on June 9.

Later that month, DeSantis invoked the movie in contending he doesn’t poll.

“Too many politicians, they get paralyzed by these polls,” he continued. “A leader needs to understand where ‘true north’ is. You know, have you guys seen ‘Top Gun: Maverick‘? The Navy, like, we always know where true north is. … These ships are out there, you’ve got these planes landing on the carrier, the jets,” DeSantis said, calling their efforts “really impressive” in remarks to the Boys State Program.

For DeSantis, the brand synergy has offered a convenient narrative hook, though it is one the new ad calls into question.

DeSantis was a commissioned U.S. Navy JAG Officer deployed in the global war on terror as an adviser to a U.S. Navy SEAL Commander in support of the SEAL mission in Iraq, where DeSantis earned a Bronze Star.

nextWhich Florida races are heading for a recount?