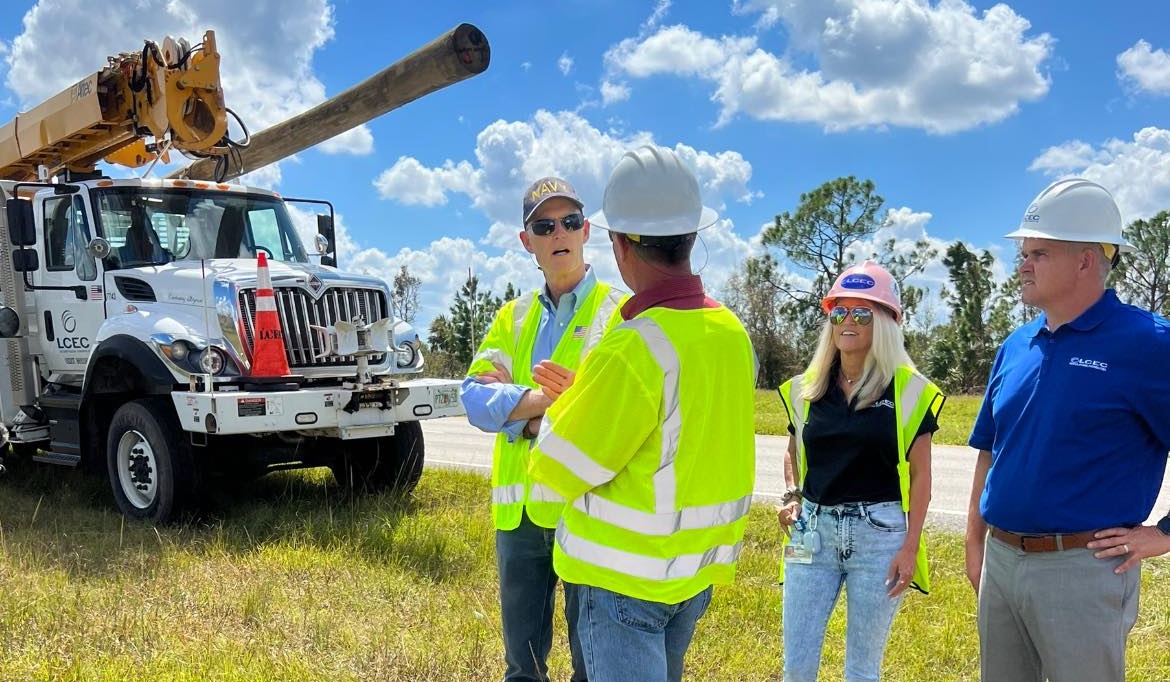 Less than 2% of Floridians remain without power nine days after Hurricane Ian made landfall in the state. As of early morning on Oct. 6, only four counties still have greater than 5% of customers without electricity.

The vast majority of outages remain on grids for the Lee County Electric Cooperative (LCEC) and with Florida Power & Light (FPL). FPL says it expects to have all customers powered up within 72 hours, but LCEC says it could still take greater than five days to get the power on for all customers.

The greatest problems remain in Lee County, where the storm made landfall on Sept. 27. A total of 136,052 customers still do not have service as of 6 a.m. on Oct. 6. The bulk of those are on LCEC, which still must bring back service for 117,492 customers, 65% of its Lee County users. The county also has 18,560 FPL subscribers without power.

U.S. Sen. Rick Scott, a Naples Republican, toured the area and visited with LCEC linemen on Wednesday and said he’s confident efforts are being made to bring power back.

“Getting the power back on isn’t easy, but the line crews at LCEC are working around the clock to help those impacted by Hurricane Ian,” he said in a statement. “I stopped by to see their work first-hand and thank them for all they do.”

In Sarasota County, 24,330 still have no service, more than 8% of consumers there, with all but four of those on the FPL grid.

In rural DeSoto County, 5,961 remain in the dark, almost 32% of users there. The bulk of them, 5,870 customers, are on FPL, with the remaining 91 on the Peace River Electric Cooperative.

Power is considered fully restored when more than 95% of customers have power, but a few counties still have a significant number of people still in the dark more than a week after the storm.

There are also 856 without power in Manatee County, less than 1% of the population. Most of those, 790, are on FPL, with the remaining 66 on the Peace River Electric Cooperative. Only small pockets of customers remain in the dark elsewhere.

Drilling further into outage reports, FPL says it still has restored no power on Sanibel or Pine Island, two areas inaccessible after Ian knocked out bridges to the barrier islands. Temporary bridge access opened to Pine Island ahead of schedule on Wednesday, Oct. 5, so that may start to change for 7,398 customers there. It’s unclear when power could come back for the 10,946 on Sanibel, where many structures have been completely destroyed.

There remain 74,199 Cape Coral customers without service, along with 32,569 in North Fort Myers. Another 2,168 on Marco Island have no power, along with 579 in Lehigh Acres, 334 in Carnestown and 169 in Immokalee. All other areas have been fully restored.

nextWith POTUS non-endorsement endorsement of Ron DeSantis, the race for Florida Governor is over