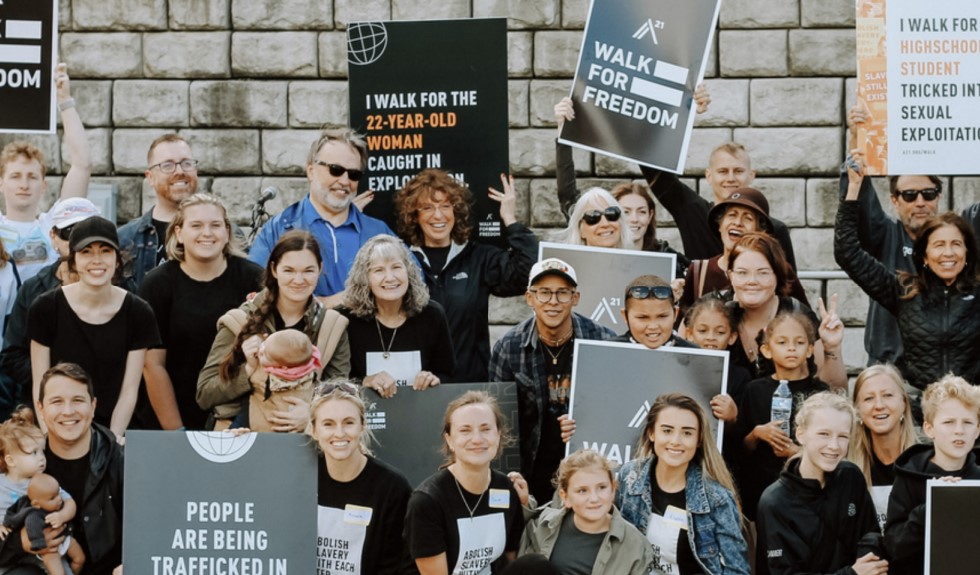 Florida has the third-most human trafficking cases nationwide. Broward County is second worst in the state (behind Miami-Dade).

For many, the phrase “human trafficking” conjures images of armed men forcing blindfolded captives across national borders toward any number of unseemly fates. While accurate in some cases, that scenario represents just one aspect of a massive, global epidemic about which far too little is broadly known.

On Saturday, Oct. 15, Kelly is hosting the inaugural A21 Walk For Freedom: Fort Lauderdale to raise awareness and funding to combat human trafficking. The walk is one of hundreds taking place that same day across the globe as part of the A21 Campaign, a global nonprofit working to fight sexual exploitation, forced slave and bonded labor, involuntary domestic servitude and other forms of trafficking.

Its name stands “Abolishing Injustice in the 21st Century.”

A Broward native, Kelly got involved with the organization through her work at the State Attorney’s Office, where she focuses on juvenile justice. Among the things that shocked her as she learned more about the issue, she said, is how much criminals harness the internet to target victims, particularly children.

According to the National Center for Missing and Exploited Children, the number of online enticement reports nearly doubled between 2019 and 2020 alone.

“A lot of times people think of human trafficking as people getting inside a big, white van or talking to strangers and then getting kidnapped,” Kelly said. “But nowadays, we’re seeing more cases in which younger kids are getting groomed on the internet and then being sexually exploited. That’s the more modern-day version of human trafficking, and that’s one of the reasons I became so passionate about it.”

More than 800,000 victims of human trafficking are enslaved each year, according to the nonprofit group, Human Rights First. That includes anywhere from 15,000 to 50,000 women and children forced into sexual slavery in the United States annually, the nonprofit intelligence firm DeliverFund said.

The average age of entry into human trafficking is between 12 and 14.

“Human trafficking is the second-largest illicit industry and the world’s fastest-growing criminal enterprise … and tragically, the public is often unaware of its existence, allowing it to thrive and creep into our communities,” Lt. Gov. Jeanette Nuñez, a member of the Statewide Council on Human Trafficking, told attendees of a roundtable on illegal trade in Miami-Dade County last year.

As is the case with nearly every other kind of illicit trade, Florida is a hotbed for the activity, ranking behind only California and Texas in having the most human trafficking cases nationwide. Between December 2007 and 2020, there were nearly 5,400 recorded cases in the Sunshine State, according to the National Human Trafficking Hotline.

And broken down by county, Broward ranks second worst for the most human trafficking cases in the state, behind Miami-Dade.

Kelly said she expects 100 to 250 people to participate in the inaugural walk, which begins 8 a.m. at the Nancy J. Cotterman Center, a sexual assault treatment center in downtown Fort Lauderdale. Participants will walk in single file up and down US 1 holding posters and handing out flyers to share the message about human trafficking and how to end it.

“The route chosen will provide maximum visibility for our cause and the organizations partnering with us,” she said.

There will be water and breakfast snacks, Kelly said, as well as a demonstration tied to another anti-human trafficking organization called the Red Sand Project.

“They send you red sand, and the walk participants put it in the cracks of the sidewalk or in the street to create a visual experience, to show that we don’t let anyone slip through the cracks when it comes to human trafficking,” she said.

Kelly is seeking financial backing for the event and offering five sponsorship tiers. Bronze sponsors will receive two T-shirts for contributing $150. Silver sponsors, who contribute $250, will receive four T-shirts and recognition on a sponsor board taken on the walk. Gold sponsors, in exchange for $500, will receive four T-shirts, sponsor board recognition and their company logo and a link on all social media related to the walk. Platinum sponsors that contribute $1,000 or more will receive all those benefits plus their logo on more than 100 T-shirts.

There is also a “partner” donation tier of $100, rewarded with recognition on a donor list posted on all social media.

Several sponsors have already signed on. Among them: Attorney Sigrid McCawley, who represented victims of Jeffrey Epstein and Ghislaine Maxwell in several civil cases; The Bougainvilla House, a Fort Lauderdale-based nonprofit focused on youth substance abuse and mental health treatment; and Modern Roofing Inc., which has operated in South Florida for nearly 30 years.

The event also will include a celebrated activist whose past efforts earned him local and national headlines.

Roger DeHart, a bailiff with the Broward court system for more than two decades, is no stranger to walking to raise awareness about human trafficking. In 2018, he walked more than 1,000 miles from the steps of the Broward County Judicial Complex to the U.S. Capitol to bring attention to the issue.

Like Kelly, his involvement grew from his work in the justice system. He started attending human trafficking awareness events and heard firsthand stories of the horrors survivors and victims endured.

He and Kelly met a few months back. When she asked him to participate in the walk, he agreed. There’s so much more work to do, he said.

“The movie, ‘Taken’ — great movie, but it’s not the reality of what goes on here in South Florida,” he said. “Human trafficking is happening in every single city in our county. People and neighborhoods are being affected. You have no clue, because pimps and abusers aren’t just a big guy with a gold chain and all that. They’re simply people who prey on vulnerabilities.

“Coming to events like this will help you see the battle is bigger than we picture.”