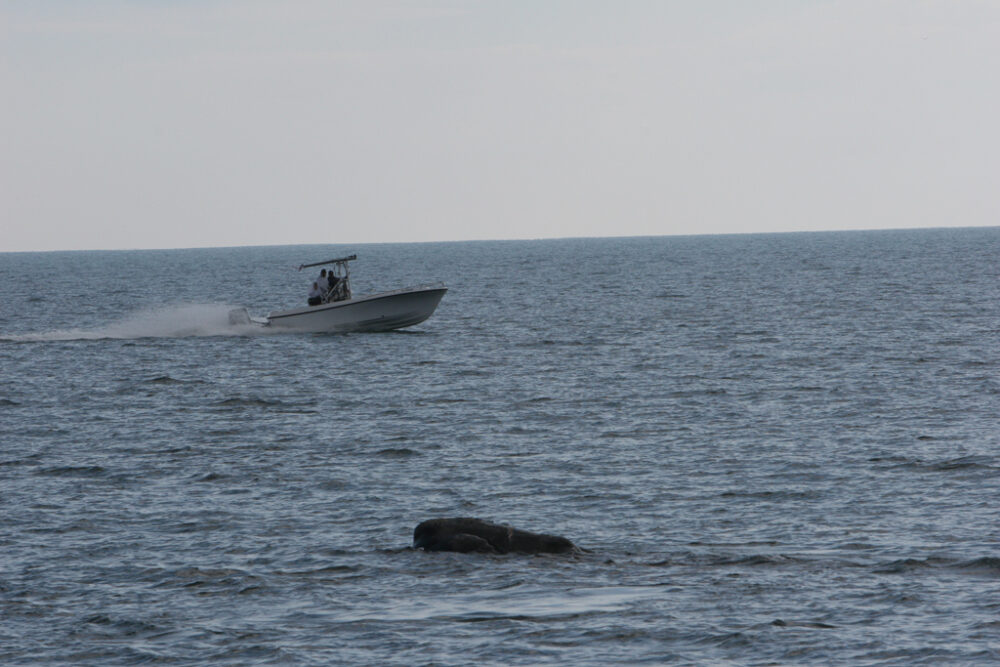 'Of potential concern ... would be the potential impact to the (harbor) pilots.'

Harbor pilots aren’t happy with new speed restrictions in NOAA Fisheries’ proposed North Atlantic right whale rule package, but Port of Fernandina officials aren’t ready to publicly oppose a measure meant to enhance the survival of a species on the brink of extinction.

A 10-knot vessel speed rule was in effect for areas where right whales transit, but it was for vessels 65 feet or longer. The new rule drops the length to 35 feet.

County Manager Taco Pope brought up the issue with the Port this week, along with Fernandina City Manager Dale Martin and the city marina manager, to see if any local governments or agencies were going to take a position on the rule.

“It now catches a lot of the smaller fishing boats, pleasure craft,” said David Kaufman, Executive Director of the Port of Fernandina’s Ocean Highway and Port Authority (OHPA). “Of potential concern to OHPA would be the potential impact to the (harbor) pilots.”

The pilots are concerned about a provision in the proposed rule that requires immediate reporting of deviation from the speed restriction, when such deviations are necessary.

“I reached out to my counterparts at JAXPORT and Port Canaveral, and both of them are considering their positions, taking some public action,” Kaufman said at the last OHPA meeting.

“I just want to stress that we really cannot, cannot stress the seriousness of the right whales’ situation enough,” said Caroline Good, a large whale ecologist with the Office of Protected Resources at NOAA Fisheries, in a September webinar on the rule package.

“I really, really want to note that the only reason we’re moving forward with this is because we have to be able to address these problems with vessel strikes on the ocean and that’s why we’re going ahead and proposing these. There’s really nothing else out there that we can do, and this is absolutely essential to right whale recovery.”

The Southeast speed zone, which covers the calving grounds off Southeast Georgia and Northeast Florida, would be in effect for the annual calving season, from Nov. 15 to April 15.

“I spoke with the pilots today about it — they considered it would be nice if we issued a letter, but it was not a, ‘By golly, you better do it because we really need it,’” Kaufman said.

They don’t oppose the rule outright, but would like an exception for the federally dredged channels they work in, he added. If a whale were spotted in the area, a dynamic management area would go into effect.

People have advocated for these areas as opposed to seasonal restrictions, especially in the mid-Atlantic where the whales are less likely to stay for an extended period. It’s a different situation off Amelia Island, where the whales come to give birth.

“Personally, I don’t think we need to write a letter,” OHPA Chairman Danny Fullwood said. “I think that’s going to be covered by so many other ports that they won’t even look (at the opinion from) our little Port, and whatever they’re going to do they’re going to do.”

There is also a strong conservationist presence locally.

“We have a large right whale contingent in Fernandina (Beach) and Nassau County, and I wouldn’t want to do anything to upset that group,” Fullwood said.

Commissioner Miriam Hill expressed her support for a narrow exception for the harbor pilots and their operations, but she was uncomfortable with authorizing a letter since other times OHPA authorized such letter-writing, she said the content of the note didn’t fit the intentions of the Commissioners.

Fullwood said OHPA will see what other commissions decide to do and figure out their own path from there.