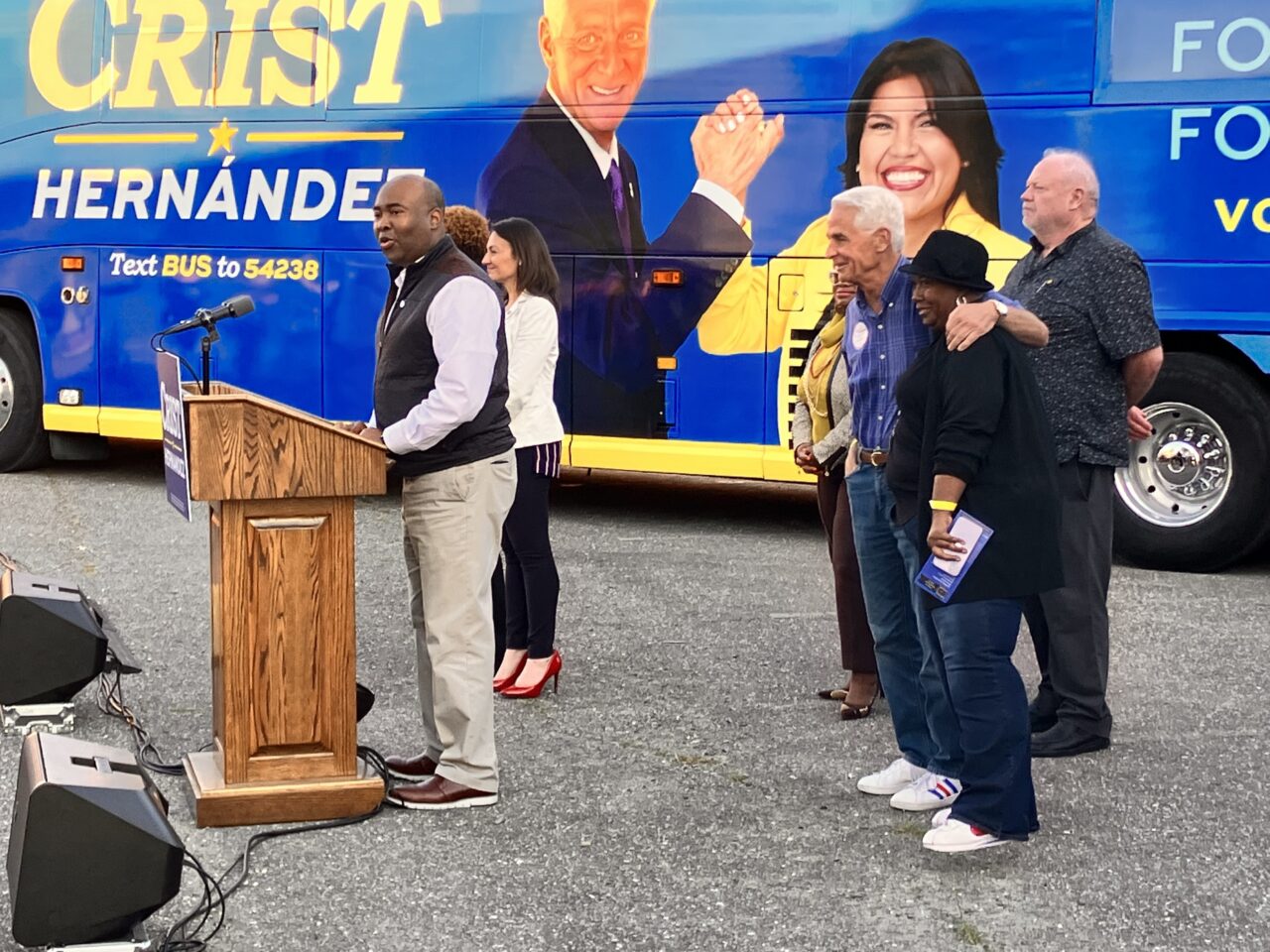 Dozens of supporters were on hand for DNC event in pivotal Duval County.

As the gubernatorial campaign of Charlie Crist enters its stretch run, he’s getting timely outside help.

Democratic National Committee Chair Jaime Harrison and Agriculture Commissioner Nikki Fried, who lost the August Primary to Crist, were among the speakers Thursday afternoon in Jacksonville at the IBEW Union Hall.

The event started over an hour after the 5:00 opening, with dozens of supporters finally arrived by the 6:20 p.m. beginning.

“This is one of the most important midterm elections of our lifetime,” Harrison said. “I am thrilled we are beginning our bus tour in Jacksonville.”

An Amber Alert went off on dozens of phones as Harrison spoke, adding a somber tone to the pitch, while seeming like apt symbolism to one observer. A child was missing.

Soon enough the Chair was back to his pitch, painting Republicans as extreme on abortion and other issues. Harrison got in another joke about Gov. Ron DeSantis before the end of the rally, saying that Democrats would “send him to Venezuela.”

Crist was energetic, displaying a pugnacious style that felt like a preview of next week’s sole gubernatorial debate.

Crist spotlighted the affordability crisis, including gas and utility prices, blaming DeSantis for a “lapdog” Public Service Commission and searing “this clown” for not cutting the gas tax until October.

He also spotlighted abortion, a key issue of the campaign, including a young incest victim who had the leave the state for the “cure she needed and the care she needed.”

Fried talked about a rally she did at this same IBEW hall, noting that she stumped on back of a pickup truck in heels. She said again she wanted DeSantis to be a “one-term Governor” and a “zero-term President,” remarks familiar to those covering the Primary.

“It has been my absolute honor and privilege to represent you in the Florida Cabinet the last four years,” Fried said near the close, a recognition that her time as the only elected statewide Democrat has all but wrapped.

State Rep. Tracie Davis led a “Vote them out” chant. Davis is running for state Senate against a write-in opponent, so she is likely safe in November.

Davis also said it was necessary to “drag” young voters to polls.

“If we don’t have 18 to 30 year olds voting with us, we are not going to be successful,” the third term legislator said. Few voters in that age range were on hand, so that is a work in progress.

“Why are we here today? The next 19 days, they are very important,” Pittman said. “We need to make sure that no Democrat is left behind.”

In the crowd, but not speaking: CFO hopeful Adam Hattersley. He was at least acknowledged from the stage.

The Florida stop is the first in the series of swing-state travels for Harrison. Crist’s event is billed as a “bus tour kickoff,” meanwhile, so iterations of the event Thursday likely will occur elsewhere as Election Day nears.

previousLast Call for 10.20.22 — A prime-time read of what’s going down in Florida politics