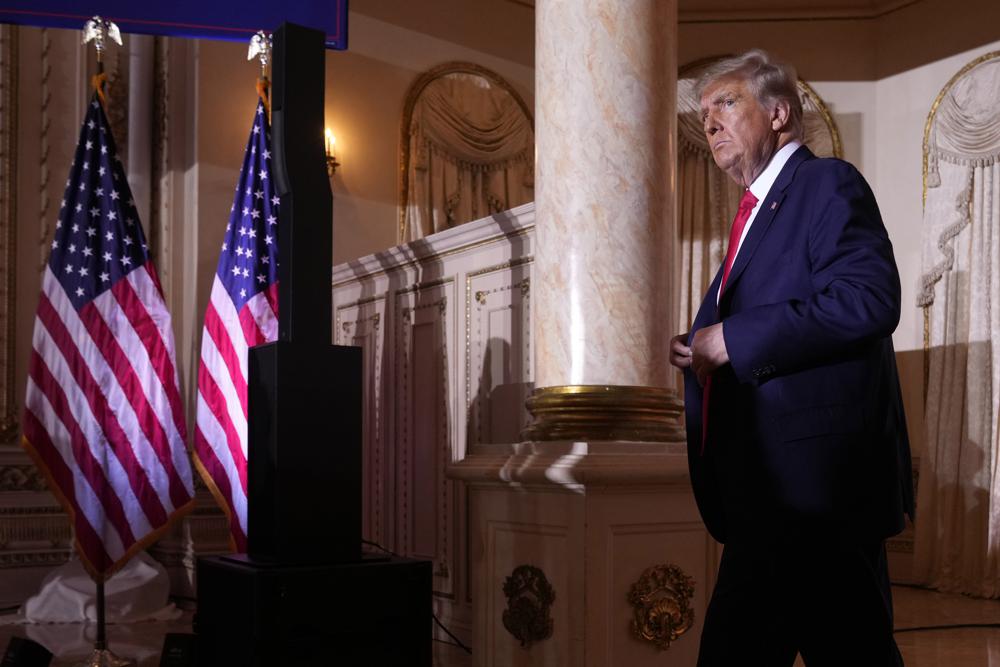 Gov. Ron DeSantis has brushed off questions, but Matt Gaetz became an earlier endorser of a Trump return.

Leading Republican officials sought to ignore Donald Trump’s formal step into the 2024 presidential contest, insisting there were more pressing priorities as GOP leaders grappled with the fallout of a major midterm disappointment.

Florida Gov. Ron DeSantis said it was much too early for Republicans to focus on the next presidential election when asked about a brewing GOP divide during a news conference the morning after Trump’s announcement. Declining to say the former president’s name, DeSantis, a potential Trump rival in 2024, said he was focused instead on Georgia’s upcoming Senate runoff and his governing priorities in Florida.

“We just finished this election. People need to chill out a little bit on some of this stuff, I mean seriously,” DeSantis said. The 44-year-old Republican governor continued: “At the end of the day, it’s been a long election, we’ve got the Georgia runoff, but for me it’s like, OK, what more do we need to do to continue to make Florida lead the way? We’re going to be focusing on that.”

The sentiment was echoed by leading Republicans across Ohio, New Hampshire and Washington as the GOP grappled with rising internal tensions and questions about its future following a deeply disappointing midterm cycle. History suggested the Republicans should have celebrated massive gains last week, but the sweeping victory party leaders predicted did not materialize as Trump loyalists were defeated across several swing states.

Ohio Gov. Mike DeWine deflected a question about Trump’s announcement at the Republican Governors Association meeting in Orlando on Wednesday.

“It’s a little early to be commenting on the presidential race,” DeWine said as he walked into a forum on “The Future of the GOP.”

“We are still trying to analyze what happened a week ago,” said DeWine, who won his reelection by 25 points after refusing to embrace Trump’s lies about the 2020 election.

Trump won’t make it easy for his party to ignore 2024, however, even with the opening contests of the next presidential primary season likely more than a year away.

Trump launched his third presidential bid Tuesday night before an audience of several hundred supporters in a chandeliered ballroom at his Mar-a-Lago club. That’s even as the political parties have yet to set their primary voting calendars.

The former President, who sparked a deadly insurrection after losing his 2020 reelection bid, hoped to launch his 2024 campaign in the glow of resounding GOP midterm victories. Instead, he entered the race in a moment of deep political vulnerability following a series of stringing losses that many party leaders blamed on him.

High-profile Republican candidates for the Senate and governor across Arizona, Michigan, Nevada, New Hampshire, Pennsylvania and Wisconsin who parroted Trump’s baseless conspiracy theories about the 2020 election were defeated.

DeSantis, meanwhile, won his reelection by nearly 20 points in what has historically been a swing state. With party activists openly encouraging DeSantis to seek the presidency, Trump has been increasingly critical of the Florida governor in recent weeks — even unveiling a new nickname: Ron DeSanctimonious.

Asked about Trump’s barbs on Monday, DeSantis quipped, “Check out the scoreboard.”

Senate Majority Leader Mitch McConnell, increasingly a Trump critic, declined to weigh in on the early 2024 debate when asked, although he acknowledged that the GOP “turned off a lot of these centrist voters” in the 2022 midterms.

“The way I’m gonna go into this presidential primary season is to stay out of it. I don’t have a dog in that fight,” McConnell said.

On the other side of the Capitol, House Republican Leader Kevin McCarthy, a Trump loyalist who hopes to become the House Speaker as the GOP seizes that chamber’s majority, walked away from reporters when asked whether he would support Trump’s 2024 bid.

In New Hampshire, which is in line to host GOP’s opening presidential primary election in 2024, Gov. Chris Sununu predicted that few would pay attention to Trump’s announcement in the short term.

“He won’t clear the field,” Sununu told Fox News, declining to rule out a 2024 presidential run of his own.

Sununu, a Republican, won his reelection by more than 15 points after pushing back against Trump’s election lies. At the same time, New Hampshire Republican Senate candidate Don Bolduc, a Trump loyalist, lost by 9 points.

“You could make the argument he’s never been weaker politically,” Sununu said of Trump. “It’s really an announcement from a defensive position. Therefore, I think it’s going to make a little bit of news and we’re all going to move on. There’s still going to be a lot of folks that enter this race — probably not until late ’23.”

Conservative media has also been cool to Trump’s 2024 political ambitions.

The New York Post, one of Trump’s favorite hometown newspapers, marked Trump’s campaign launch with only this line on the very bottom of the front page: “Florida man makes announcement.”

previousSunburn — The morning read of what’s hot in Florida politics — 11.17.22