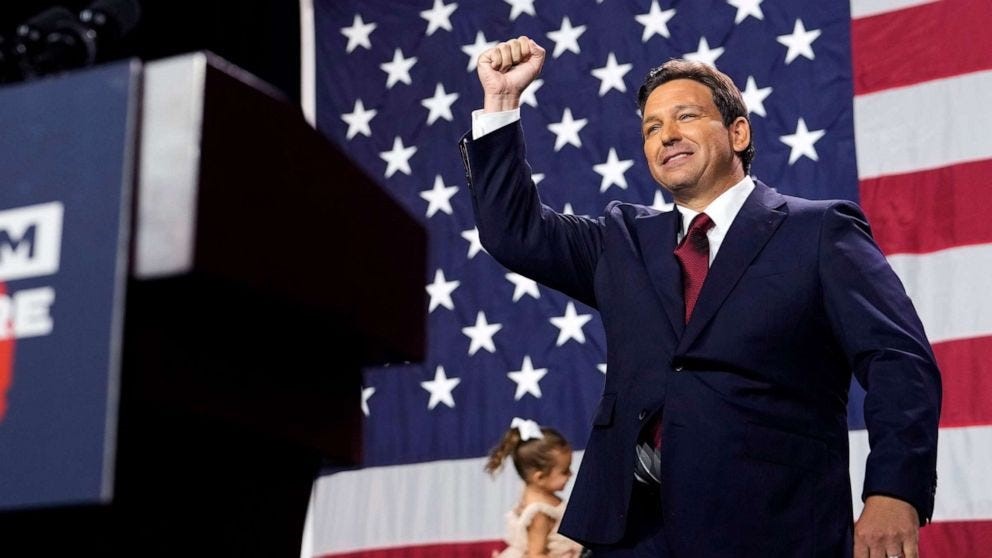 Gov. Ron DeSantis continues to be coy about plans to run for President in 2024, but supporters aren’t waiting to make that case for him, labeling DeSantis as “DeFuture.”

The “Ron to the Rescue” super PAC is rolling out a new ad that spotlights how the Governor is the best answer for Republicans to what President Joe Biden has done since taking office.

The 60-second spot begins with newscasters discussing COVID-19 “lockdown” mitigation measures, over shots of barren streets from Anytown USA. The tropes of inflation, high gas prices and violent crime were introduced next, establishing the theme of America as a “nation on the brink.”

All hope was not lost, however. By the 25-second mark, a chyron reassures that a “strong leader emerges,” and DeSantis’ familiar exhortations from his Election Night victory speech ring through speakers thereafter.

“Florida was a refuge of sanity when the world went mad! We stood as a citadel of freedom for people across this country, and indeed, across the world,” the Governor thundered, with his words quickly giving way again to another chyron and the reassuring voice of an omniscient narrator.

“While our nation struggled, Florida thrived,” the text proclaimed, setting up optimistic pictures of people driving across bridges and a shot of a couple moving into what appears to be a new construction home.

“Southwest Florida is ranking all the way at the top of the list of the best, most inexpensive places to live,” assured a newscaster, setting up the spot’s close.

On its homepage, the super PAC extols DeSantis as exhibiting “the bravery of President (Abraham) Lincoln, the charm of President (Ronald) Reagan, and the determination of President (Donald) Trump.” Yet despite third parties making that case, DeSantis continues to downplay interest in higher office on the record.

On Wednesday in Matlacha, the Governor sidestepped a question about 2024, preferring instead to focus on the Georgia runoff and governing Florida after his “historic victory” over Charlie Crist last week.

“We just finished this election. People just need to chill out a little bit on some of this stuff,” DeSantis said.

He has also attempted to be seen as taking the high road after attacks from former President Trump, who is officially a candidate as of Tuesday.

“I think some of this stuff gets overdone in some of the media,” DeSantis told a friendly questioner in Fort Walton Beach Tuesday, though he offered a contrast between Florida and GOP performance elsewhere in the country.

“At the end of the day, I would tell people to check out the scoreboard from last Tuesday night. The fact of the matter is it was the greatest Republican victory in the state of Florida.”

Join us in this fight to make DeSantis our next president of the United States 🇺🇸#Desantis2024 pic.twitter.com/NpYK1T7fBI