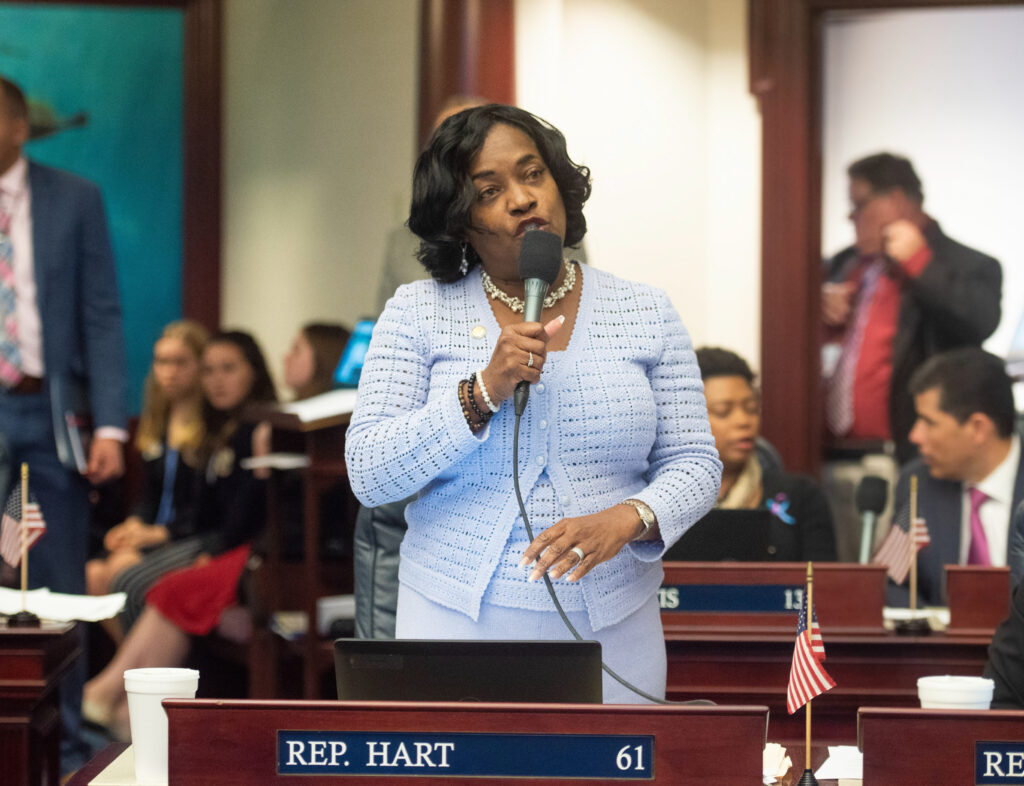 'I believe that she will work as hard as possible to get the job done for the Caucus in the state of Florida.'

With incumbents and new lawmakers convening Tuesday in the Legislature, state Rep. Dianne Hart will take a leadership role as Chair of the Florida Legislative Black Caucus, a group of minority lawmakers established in the 1960s.

Hart, a Democrat representing part of Hillsborough County, was selected to lead the Black Caucus last Thursday during a meeting with Black Caucus members.

“I’m honored to have been elected as the Chair of the Florida Legislative Black Caucus,” Hart said in a Twitter post. “I’m grateful to my colleagues for their support and for trusting me to move this important caucus forward.”

Hart is the CEO of the East Tampa Business and Civic Association, according to her bio on the Florida House’s website.

In the past legislative sessions, she served on several committees, including Criminal Justice and Public Safety, Infrastructure and Tourism Appropriations and more.

According to her campaign website, Hart is described as a community leader “who is tireless in her efforts in raising awareness about issues of hunger, affordable housing, economic development and bring awareness to the violence in our community.”

She has also fought against gun violence, presenting “programs on stopping the violence in East Tampa by working with Tampa Police Department, and various social groups.” During past sessions, Hart has backed legislation on prison reform, as previously reported by the Phoenix.

The group, comprised of Black state lawmakers from both major political parties, will continue its meeting this weekend to discuss issues to address in the upcoming Legislative Session, according to Democratic state Rep. Patricia Williams of Broward County.

“Congratulations to Representative Hart,” Williams told the Phoenix in a text message. “I believe that she will work as hard as possible to get the job done for the Caucus in the state of Florida.”

Earlier, State Sen. Shevrin Jones, a Democrat representing part of Miami-Dade County, told the Phoenix that “for the first time in a long time, in both chambers, Black legislators make up the majority of the Democratic caucus.”

He added: “It is going to be very important for the Black Caucus to use this as an opportunity to amplify the needs of our communities; that goes from infrastructure to economic development. This time is an opportunity to be strategic about what and how do we use our collective power at the table.”

Meanwhile, state Rep. Fentrice Driskell of Hillsborough County, a member of the Black legislative caucus, had been elected as the new leader of the Florida House Democratic Caucus for the 2022-24 term, as previously reported by the Florida Phoenix.

A ceremony is scheduled for Driskell’s official designation Monday evening in the state Capitol. Current and former state lawmakers from the Democratic Party will be in attendance, according to a press release from the Florida House Democrats.

Driskell, who represents part of Hillsborough County, made history as the first Black woman to serve in the role of House Democratic Leader in the Florida Legislature.

previousFlorida is turning its back on the New South, embracing its Dixie-fied past