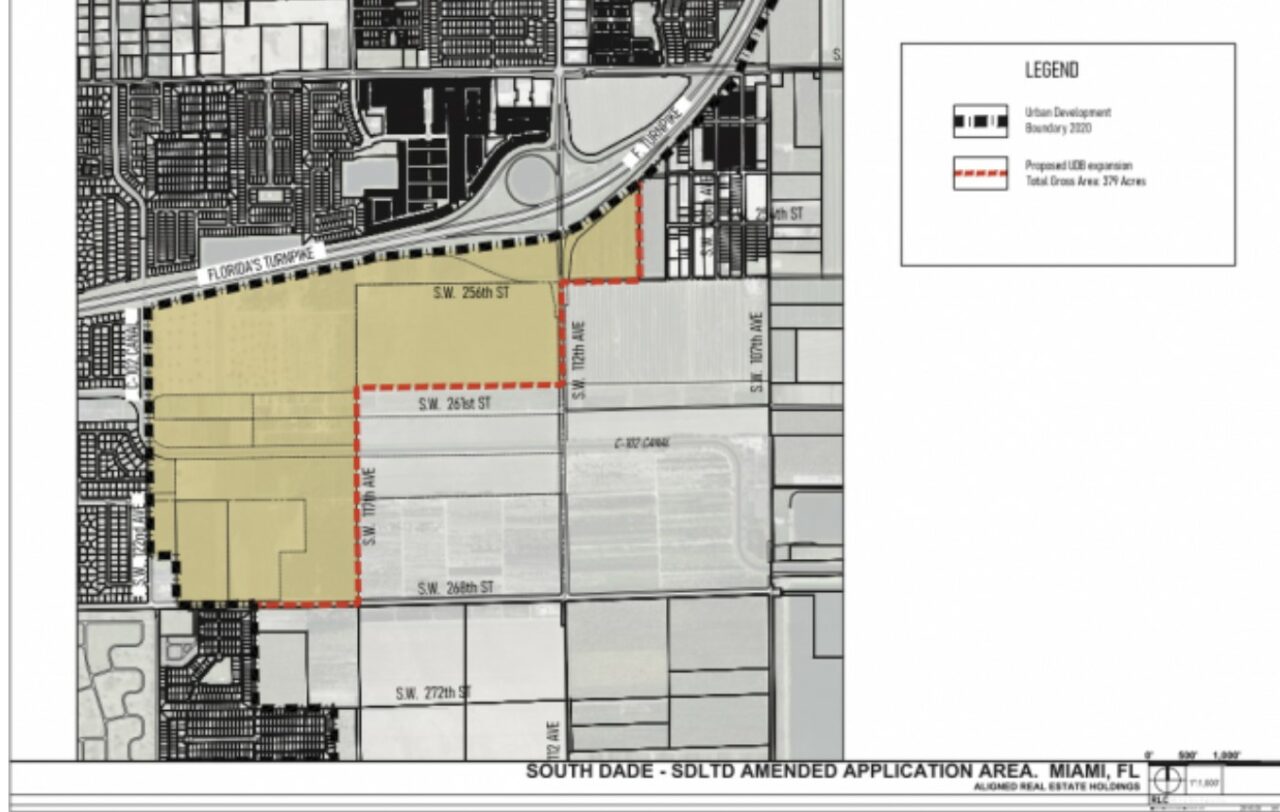 Miami-Dade’s Mayor, staff and environmental groups recommended against moving the boundary to allow a warehouse megadevelopment. The County Commission OK’d the move anyway.

The Miami-Dade Commission’s decision to allow construction of a warehouse complex in an area previously protected against commercial development faces a new challenge that could invite Gov. Ron DeSantis to weigh in on the matter.

On Thursday, Miami-Dade resident Nita Lewis filed a petition requesting a hearing before an administrative judge over the legality of the “South Dade Logistics & Technology District,” an industrial project set to rise across 379 acres of farmland.

Lewis, an assistant professor at the University of Miami who lives near the proposed site, contends in her petition that the project threatens the county water supply, requires taxpayer support for development and is in conflict with Everglades restoration plans.

Those assertions comport with prior opposition voiced for more than a year by the Hold the Line Coalition, one of several environmental groups that argued against the project and an expansion to the county’s Urban Development Boundary (UDB) enabling its construction near Homestead Air Reserve Base.

“To ensure that Miami-Dade can prosper now and in the future, our community must take on its greatest challenges, such as sea level rise, flooding, and pollution of Biscayne Bay; worsening traffic and our affordability crisis,” Lewis said in a statement.

“I am concerned that this development will endanger the homes in the area, including my own home. Poor planning is the reason so many of these concerns are reaching a crisis point now. Let’s not continue to make the same mistakes.”

The petition notes that county staff urged Commissioners to deny expanding the UDB due to those concerns and determined there is “sufficient land near existing infrastructure” elsewhere to build the project but that the Board largely disregarded them.

Proponents of the largely undefined project pointed to its employment potential, creating anywhere from 7,000 to 17,000 new jobs, in an area long in need of local industry. They cited a commitment developers Stephen Blumenthal and David Brown of Coral Rock Development Group and Jose Hevia of Aligned Real Estate Holdings made to purchase and give the county 622 acres for preservation.

In an October guest column in the Miami Herald, Blumenthal and Hevia said a “large percentage” of the project site — which they have under contract from multiple entities — contains soil contaminated with arsenic, the cleanup for which was estimated to cost $47 million.

On Nov. 1, Commissioners approved an ordinance approving the project and pushing back the UDB.

Miami-Dade Mayor Daniella Levine Cava vetoed the item nine days later. In an accompanying statement, she said moving the UDB “without the need to do so will have a detrimental impact on residents countywide for generations to come.”

“This application prioritizes short-term financial gain — with no guarantee of job creation — at the expense of our shared economic prosperity and our precious natural environment,” she said.

“That’s why the proposal drew clear, bipartisan opposition from the residents and (District 8 Commissioner Danielle Cohen Higgins), county planning experts, advocates and federal, state, local, and tribal leaders, including Sen. (Marco) Rubio and the Florida Department of Environmental Protection, and many others.”

But on Nov. 15, Commissioners voted 8-4 to overturn the veto, the same margin by which the ordinance originally passed.

Levine Cava lamented the move, as did Cohen Higgins and fellow Commissioners Sally Heyman, Eileen Higgins and René García, who voted “no.”

Fata Carpenter said the County Commission’s veto override “flies in the face of the protections that the UDB is intended to ensure.”

“It is a threat to our communities, drinking water, Biscayne Bay, Everglades restoration and our critical climate resiliency efforts,” she said. “We cannot allow the precedent that this decision sets to stand.”

Should a federal judge deem the petition valid, he or she would then be able to make a recommendation to a panel consisting of the Gov. DeSantis and Florida Cabinet, which consists of Attorney General Ashley Moody, Chief Financial Officer Jimmy Patronis and incoming Agriculture Commissioner Wilton Simpson. The panel could then either approve or reject the proposal and UDB expansion.

Of note, the last time the panel met to weigh moving the UDB was in June 2021, and a majority of its members voted to allow planning, reviews and permitting processes to continue for the 14-mile Kendall Parkway, which would run over wetlands abutting the Everglades.

The sole holdout in the 3-1 vote was outgoing Agriculture Commissioner Nikki Fried, who is leaving office in early January after a failed bid for Governor.

previousTakeaways from Tallahassee — TaxWatching the future