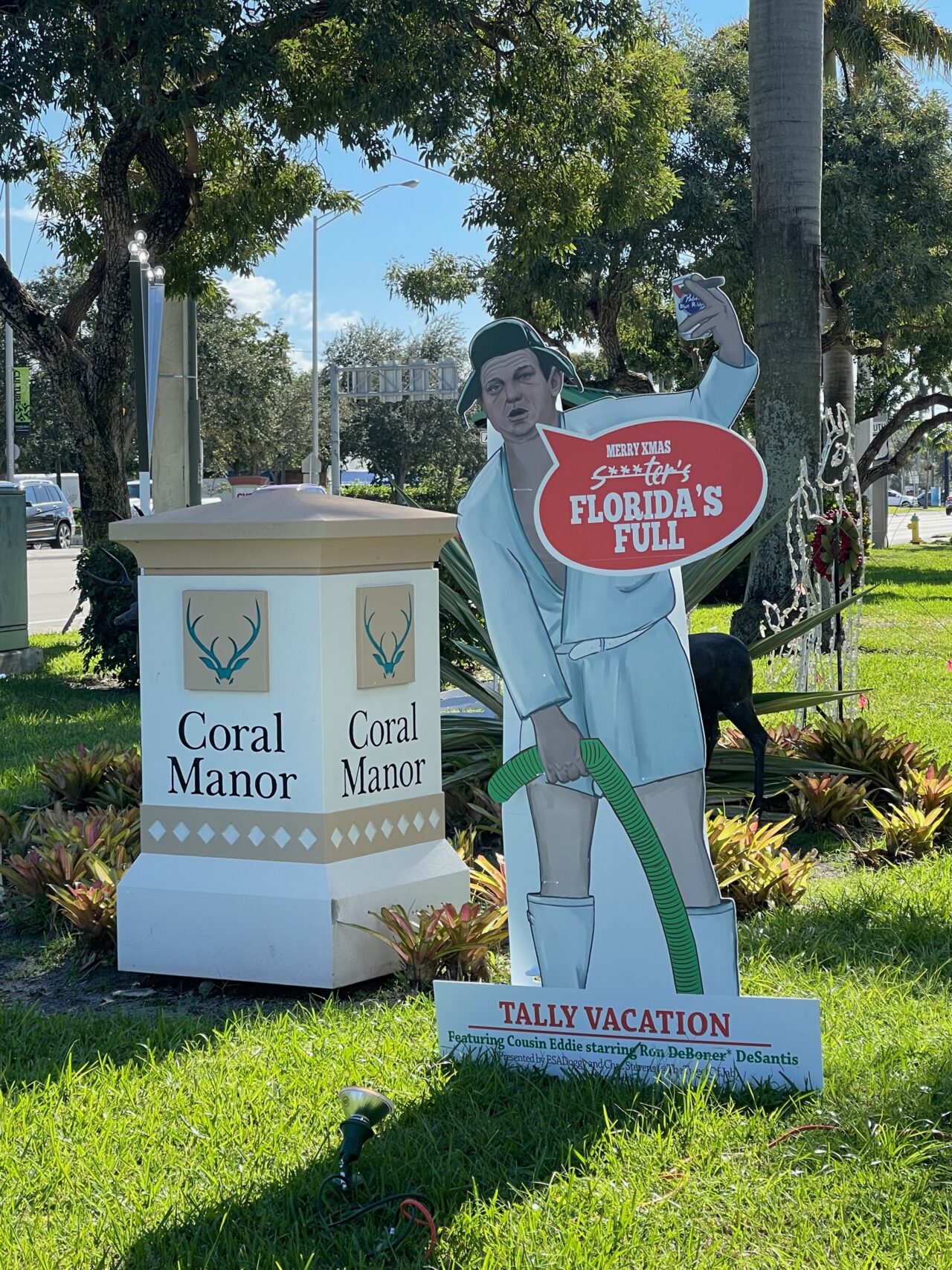 A 7-foot likeness of the Governor is an homage to 'National Lampoon's Christmas Vacation.'

Broward County might be one of a handful one counties that did not prefer Gov. Ron DeSantis in last month’s election, but the Governor is starring in the latest installation from the area’s perennial political stunt artist.

It was erected alongside Deerfield Beach’s seasonal display Thursday.

Local businessman Chaz Stevens, who received national attention after erecting a Festivus Pole as a counterpoint to religious holiday symbols displayed at Florida’s Capitol, has returned to the scene of his first effort launched in 2012.

At the southwest corner of Hillsboro Boulevard and Federal Highway, next to a menorah, a 7-foot corrugated plastic DeSantis stands dressed in a bathrobe and hat.

This likeness shows the Governor in the same stance as Cousin Eddie, as played by Randy Quaid in iconic holiday film “National Lampoon’s Christmas Vacation.” It recalls the scene in which Cousin Eddie blithely empties a chemical toilet — in the form of some brownish liquid — down a stormwater grate.

The display in Deerfield Beach declares that “Florida’s full.” And the Governor appears to be saluting passing motorists with a raised stogie and a can of Pabst Blue Ribbon beer. The beer is an homage to Stevens’ Festivus pole that had the same kind of beer cans attached.

“We have a pinhead Governor and I thought to myself, ‘What holiday character is a pinhead?’” said Stevens, who runs ESADoggy.com, a company that provides remote animal-assisted health care. “There’s no bigger pinhead than Cousin Eddie.”

Stevens intends to keep Cousin Ron up through the holidays — it’s waterproof, but there’s no telling how long it will stay standing.

An eight-foot “Buddy Christ” that Stevens had put up for the Delray Beach holiday tree lighting on Nov. 29 — also with that city’s permission — did not last through the evening’s festivities and incited the ire of some. A Twitter user accused him of wearing the carcass of Western Civilization. The LED-lighted likeness has not been seen since that evening.

JUST IN! The Cardboard Cutout in Delray Beach MOCKING Our Lord and Savior Jesus Christ placed by @TheTweetOfJab has been KNOCKED DOWN!!! 👏👏👏👏👏 pic.twitter.com/w7p6qvZaTk

But he said he’s going to keep the tradition up.

“Art is supposed to evoke emotion and making people to want to vomit is an emotion isn’t it?” he joked. “It’s not like we’re having an insurrection.”

nextSunburn — The morning read of what’s hot in Florida politics — 12.9.22