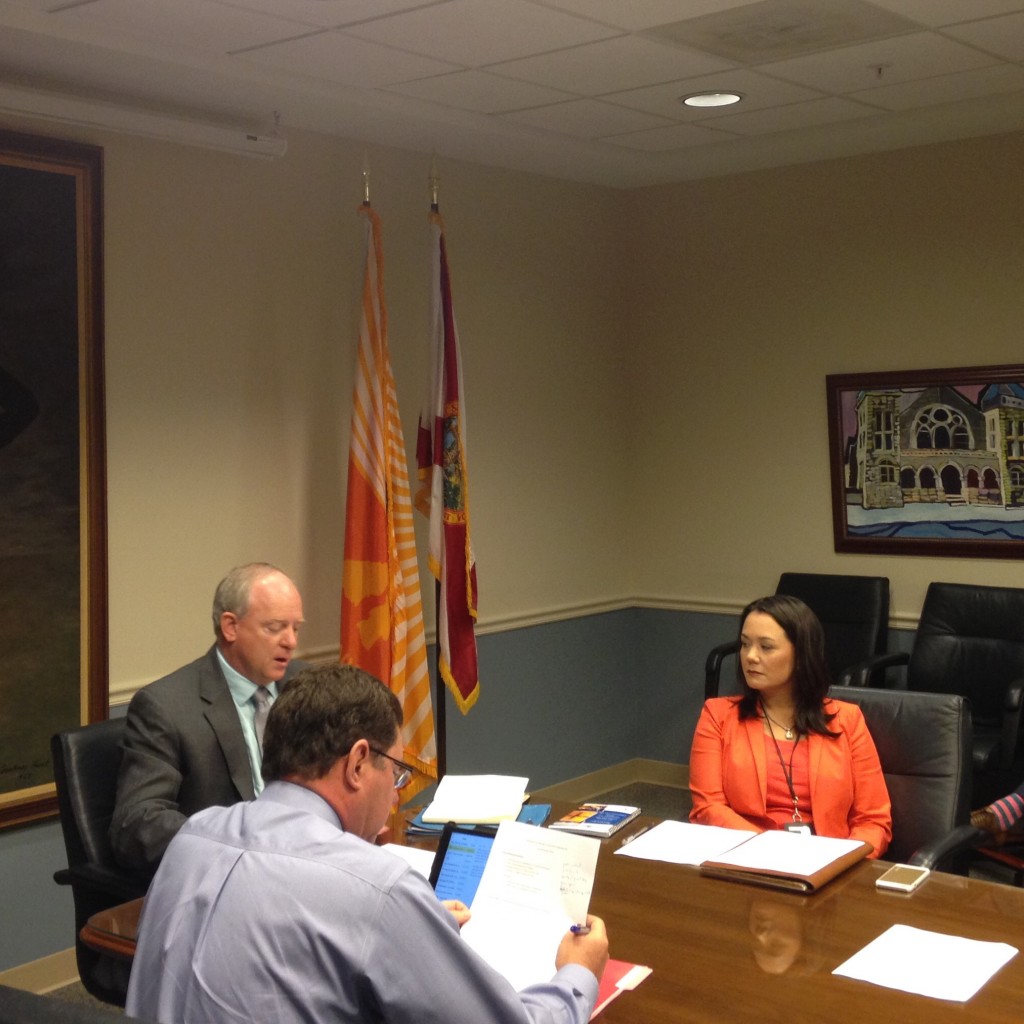 Could the recent Jax Chamber Leadership trip lead to a Better Jacksonville Plan part 2, modeled after the Oklahoma City vision? Or will the pension crisis preclude such an ambitious vision?

Along with those four, a vast group of community leaders, and at least one connected member of the media, made that trip, and such efforts are increasingly instrumental to the branding strategy employed by the current generation of political and business leadership in Jacksonville.

Of particular interest: projects that have helped to define OKC, such as Metropolitan Area Projects (including a ballpark, a canal, a convention center, an arena, fairgrounds, library spending, and transportation projects).

These “MAPS”, funded with a one cent sales tax, are credited with a 5 to 1 return in promoting growth, and as Bowman said, this was devised when city fathers concluded that “nobody wants to live here” in OKC (a familiar theme for those in Jacksonville, who often hear young people pledging to move away as soon as they graduate high school).

(To this end, one person suggested that for projects, such as a $90 million stadium improvement project, a model of anticipated ROI might serve as a useful selling point. To that end, it was also suggested that city leaders message on the progress of a project, with especial focus on those coming in over budget for whatever reason, to preclude adverse media coverage thereof).

Council President Anderson noted how “critical” the Chamber was to the initiative, while Brosche echoed the essentialness of teamwork to the strategy, including previous mayors presenting an image of continuity and mutual respect “in that vision and what they were looking to accomplish as a city.”

“Everyone in every session of this trip,” said Brosche, “had the exact same story” and “messaging.”

As well, tragedies experienced in OKC helped to galvanize their messaging.

A quirk of their process: everything was financed via cash on hand, in what Brosche called a “debt free” approach that precluded their city having to “rely on estimates like we have in the past.”

Still, Bowman said, they “had to show progress,” which was nettling to members of the public who might not have understood what was going on.

Bowman on the continuity of mayors: “it looked like a grandpa, a father, and a son.”

Another takeaway, said Bowman: the lack of term limits and the lack of party labels, and prevalence of NPA candidates, helped with such continuity.

As well, the Myriad Botanical Gardens, planned in 1970, were discussed.

Bowman noted that even in 1970, it was evidence that the community was involved, as Council established a task force.

Kirk Wendland of the Office of Economic Development noted that central to the plan was a community commitment to “do it well” and “not on the cheap.”

Council President Anderson noted the significance of the “green space in the business district,” while Bowman appreciated that it was a place to “congregate” downtown.

The agreement, a public-private partnership, has OKC pay a third of the operating costs.

Conversation turned to OKC’s use of tax-increment funding for projects, reinvesting money , which Greg Anderson called a function of the “boom/bust” nature of their economy.

Discussed as well: the manmade canal in Oklahoma City.

“For them to create a river,” said Brosche, “and have such development and excitement around it,” was remarkable, and instructive, given Jacksonville’s amount of natural assets.

Bowman noted that along the canal, condo prices (and property taxes) are among the highest in the city.

Central to the buy-in among the “black community,” said Bowman, was redevelopment of OKC’s once blighted Deep Deuce and Bricktown districts. The latter is now a thriving entertainment district.

“There’s some agreement that downtown development and reinvestment is the way forward,” said Mayor Curry, “but the community has to understand that our priorities include the entire city.”

These are all great ideas, but as Larry David might say, “curb your enthusiasm.”

Mayor Curry cautioned that until the “unfunded liability” from the Police and Fire Pension Fund is resolved, programs like this in Jacksonville won’t be able to proceed.

“We have to face the realities,” Curry said, “if we don’t solve the problem… we will be the next Detroit in short order.”

Curry, in the meeting, mentioned that one of his asks in Tallahassee this session will be for “relief” on the pension issue.

“We’re going to make a pitch in Tallahassee in January,” said Curry, and if “our solution works this session, we’ll all be singing and dancing in the months ahead.”

Council will be briefed on this solution in the days or weeks ahead, said Curry.

If successful, savings could approach $100 million a year.

The balancing of priorities between an ambitious vision for 21st century development and the resolution of 20th century crises aired on Monday morning stands as a synecdoche for Jacksonville’s issues as a whole.

A big takeaway, however, was that OKC maximized a lot of relative disadvantages, becoming a great regional city through a combination of concerted effort and established vision, one that transcended party politics toward a quantifiable greater good.

As Aaron Bowman said toward the meeting’s close, “I want other cities visiting Jacksonville, and asking us how we did it.”

Bowman attributed that line to former Mayor John Delaney, the architect of the first Better Jacksonville Plan a decade and a half ago, which indicates that the perception problem is one with deep historic roots.

While “we’ve learned some amazing things” from this and other Chamber trips, “we haven’t always executed them,” Bowman added.