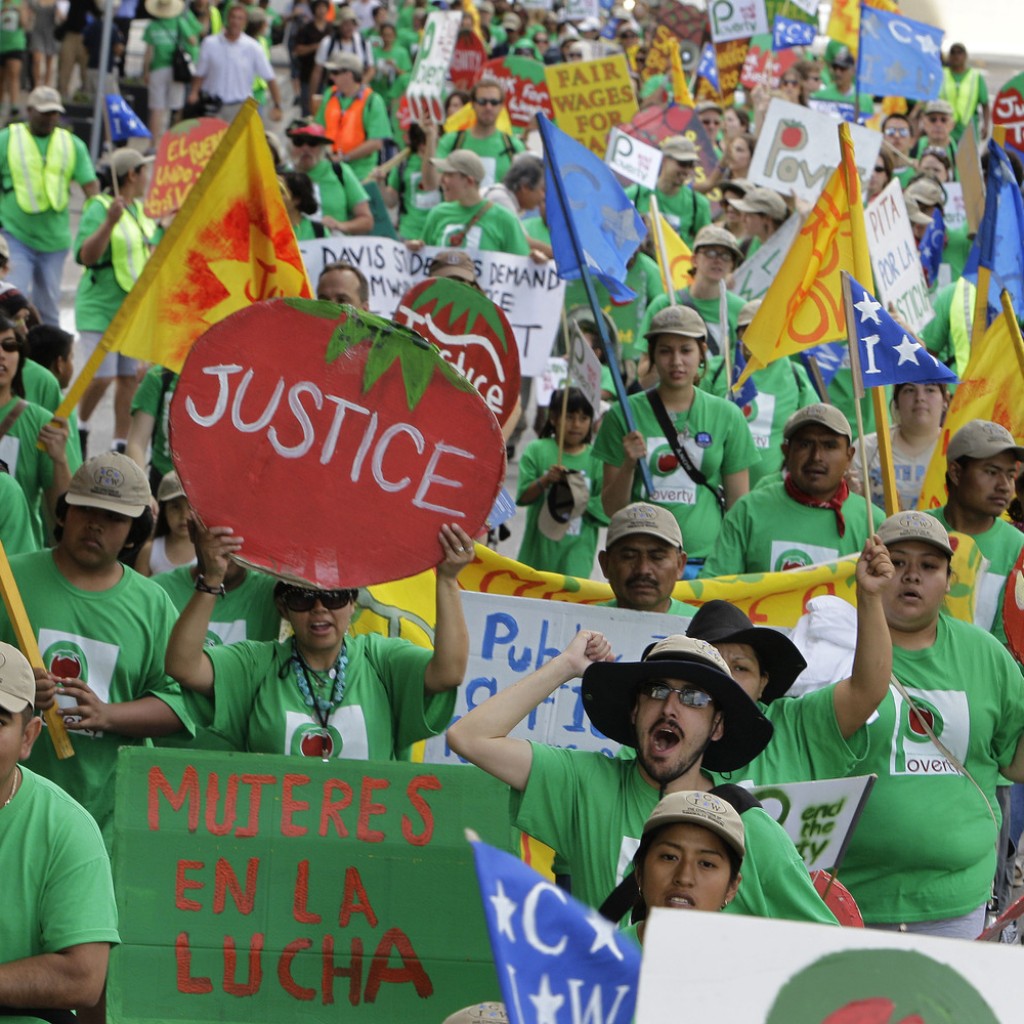 A U.S. farmworkers coalition is suing Palm Beach, alleging the wealthy town’s ordinances effectively bar the group from its constitutional right to hold a protest near the home of a billionaire fast-food executive.

The Coalition of Immokalee Workers, representing about 40,000 field workers, wants a federal judge to allow a planned demonstration March 12 near the home of Wendy’s Company board chairman Nelson Peltz. At issue is the company’s refusal to pay a penny-per-pound fee for its tomatoes to supplement some farmworkers’ wages. No hearing date has been set.

The coalition says that while Palm Beach’s ordinances expressly permit demonstrations, others are an effective ban, violating First Amendment rights of free speech and peaceful assembly. According to the lawsuit, those ordinances say demonstrations cannot: make any noise that annoys the community or disturbs the peace; impede foot or vehicle traffic; use amplification, banners and non-government flags.

Palm Beach Town Manager Tom Bradford said he doesn’t understand why the lawsuit was filed. He said the town is willing to allow the protest but “they aren’t happy it wouldn’t be in the exact manner they want.” He said he plans to sign the special event permit.

“They have to follow our rules. We have to treat everyone equally,” Bradford said.

He added this would be the first demonstration in Palm Beach since at least 2000.

Of the 590 Florida cities, towns and unincorporated areas with at least 1,000 households the U.S Census Bureau tracks, Palm Beach is 10th in median household income at $105,700 and has a year-round population of about 8,700 that swells in winter. Current and former residents and property owners include the Kennedy family, Donald Trump, commentators Rush Limbaugh and Ann Coulter, designer Vera Wang, and entertainers Jimmy Buffett, John Lennon and Rod Stewart.

Immokalee, the southwest Florida farming about 100 miles from Palm Beach where the coalition is based, is 575th with median household income of $25,725.

The coalition has used demonstrations and consumer boycotts against the five largest fast-food companies – Wendy’s, McDonalds, Burger King, Subway and Taco Bell – to pressure them into joining its “Fair Food Program.” All but Wendy’s eventually joined. Participating companies pay the extra penny-per-pound to their tomato growers to supplement field worker wages in Florida and six other states: Georgia, the Carolinas, Maryland, Virginia and New Jersey.

Tomato harvesters make an average of about $10,000 during the six-month season, getting paid 50 cents for every 32-pound basket they fill. The coalition says the program can add $20 to $150 per week to their checks.

Peltz, a 73-year-old investor, has a net worth of $1.35 billion and is the 423rd richest American, according to Forbes Magazine. One of his companies, Triarc, bought Wendy’s in 2008 for $2.3 billion and he became chairman. Wendy’s did not make him available for comment.

University of Florida media law professor Lyrissa Lidsky, who isn’t involved in the case, said that under the First Amendment and applicable court rulings, cities and towns must allow peaceful demonstrations. Any restrictions must be reasonable and narrow, such as banning the use of bullhorns in residential areas overnight. Restrictions cannot be so vague as to give town officials discretion to ban speech they don’t like.

“Anything that unduly denies the right to protest is unconstitutional,” she said.

Coalition attorney Steve Hitov said the group has never sued a city to hold a demonstration in its two decades. He says negotiations with Palm Beach took most of January and February.

Hitov said no one has ever been arrested at a coalition demonstration nor has there been any violence or vandalism. About 500 people are expected at the Palm Beach demonstration, Hitov said, which would include a march and closing waterfront park rally involving amplified speakers, banners and signs. The park is near Peltz’ home.

“We hold professional, joyous marches that convey the message to the public that certain corporate purchasing practices make the lives of real persons worse,” Hitov said.

Wendy’s spokesman Bob Bertini said the coalition has demanded the Dublin, Ohio-based company pay an additional fee directly to the tomato harvesters who work for suppliers contracted by the chain.

“These individuals are not Wendy’s employees, and we have not thought it appropriate to pay another company’s workers – just as we do not pay factory workers, truck drivers or maintenance personnel that work for our other suppliers,” his statement said.

previousArmy Corps of Engineers to reduce flows from Lake Okeechobee