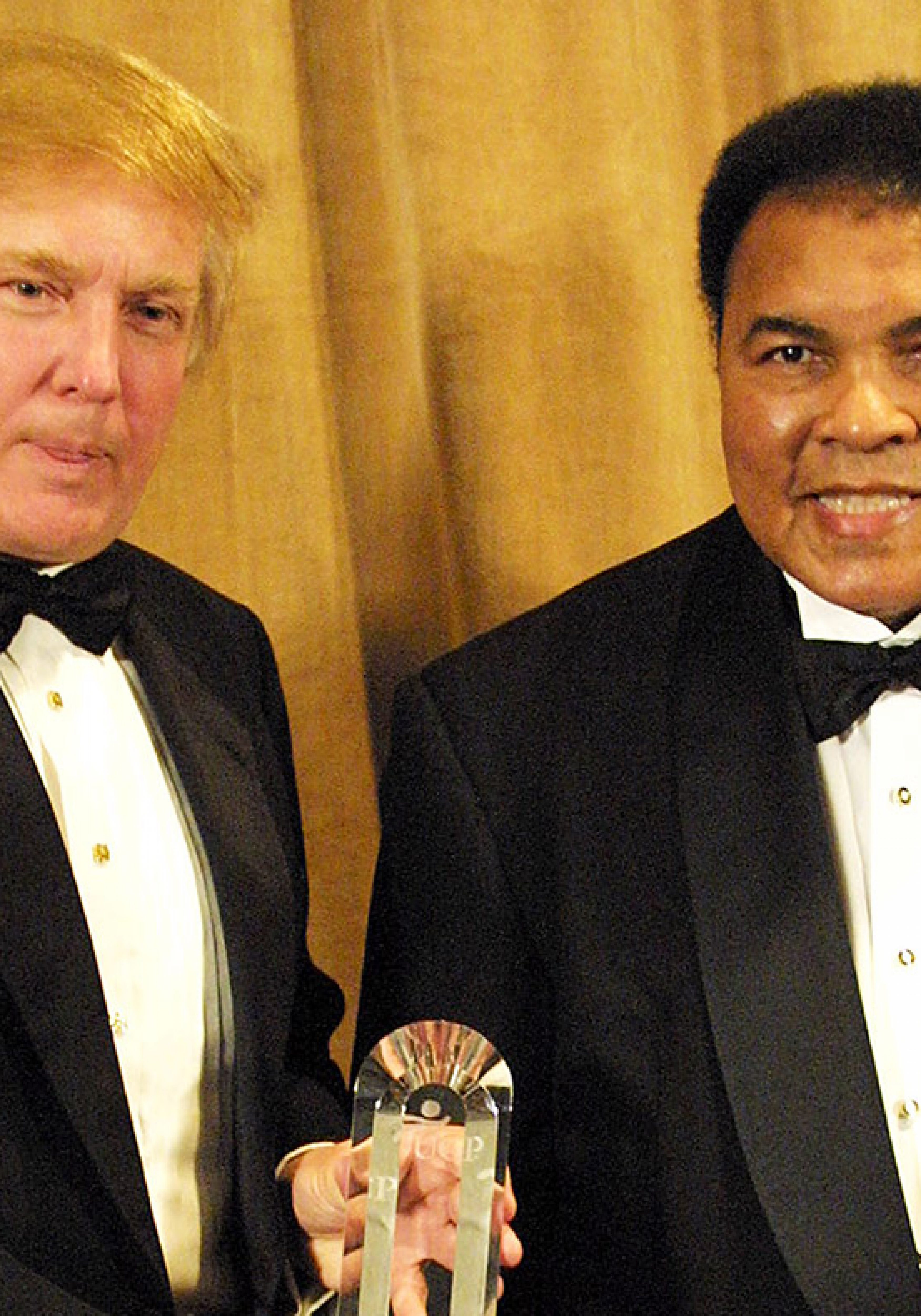 The great Muhammad Ali is dead, but that won’t stop Donald Trump trying to make political hay out of him.

Trump, who famously doesn’t like Muslims or Black people (except Dr. Ben “Sleepy” Carson and that poor dude Trump called “my African American”), allowed as how Muhammed Ali, a Muslim and a Black man, was “a truly great champion and a wonderful guy.”

Of course, Trump WOULD attach himself to the outpouring of tributes honoring the late champion. Like an orange barnacle. Actually, Ali might not have been flattered: in December 2015, after Trump announced he’d ban Muslims from entering the country, Ali appeared to rebuke him, stating, “Speaking as someone who has never been accused of political correctness, I believe that our political leaders should use their position to bring understanding about the religion of Islam …”

Trump and Ali knew each other, often showing up at the same charity events and awards ceremonies, presenting each other with checks and trophies. Yet Ali’s religion and his eminence often seemed to slip Trump’s mind. After Barack Obama gave a speech reminding the country that Muslims are part of America’s fabric. Trump tweet-snarked: “Obama said in his speech that Muslims are our sports heroes. What sport is he talking about? And who? Is Obama profiling?”

Just wait: Trump will soon complain that it’s very, very unfair, disgraceful, and REALLY WEAK that Bill Clinton, the King of Jordan and Sen. Orrin Hatch were invited to speak at Ali’s funeral but he, Donald Trump, was not.

Some Trumpsters are drawing parallels between their man and Ali: hey — big mouths, right? And lots of self-confidence. Plus, Ali said way more racist stuff than the Donald!

OK, let’s compare: Ali scared the be-Jesus-heck out of tradition-minded white people, like in 1964 when he converted to Islam, a protégé of Malcolm X.

Then right after he beat Sonny Liston to become the Heavyweight Champion of the world, he announced he was no longer Cassius Marcellus Clay, Jr.: “Cassius Clay is a slave name. I didn’t choose it, and I don’t want it. I am Muhammad Ali, a free name — it means beloved of God, and I insist people use it when people speak to me.”

Donald Trump scares the bejesus-heck out of everybody else, what with saying that if Ivanka weren’t his daughter he’d like to, ahem, “date” her, the U.S. should bring back torture, and “If Hillary Clinton can’t satisfy her husband, what makes her think she can satisfy America?”

Consider that last statement for a moment. Then go bathe in Lysol.

As for military service, Trump got multiple draft deferments: bone spur on his right foot — or was it his left? Which is OK, because five years at the New York Military Academy (a prep school where rich boys get to wear made-up fancy feathered hats and play soldier) gave him “more training militarily than a lot of the guys that go into the military.”

Ali, on the other hand, got called up in 1967 and refused to go, saying, “No Viet Cong ever called me nigger.”

He went on: “Why should they ask me to put on a uniform and go 10,000 miles from home and drop bombs and bullets on Brown people in Vietnam while so-called Negro people in Louisville are treated like dogs and denied simple human rights? … If I thought the war was going to bring freedom and equality to 22 million of my people they wouldn’t have to draft me, I’d join tomorrow. I have nothing to lose by standing up for my beliefs. So I’ll go to jail, so what? We’ve been in jail for 400 years.”

It’s true that Muhammad Ali called Caucasians “blue-eyed, blond-headed devils.” Slavery and Jim Crow and racial injustice will do that to you. But he didn’t practice hatred in his life. He left the Nation of Islam in 1975 and became a Sufi. Outside the ring, at least, he was a man of peace.

Ali had wit. He had charm. Intelligence. Integrity. Humor. He had a way with language: “I’m so mean I make medicine sick,” and “I’ve wrestled with alligators. I’ve tussled with a whale. I done handcuffed lightning. And thrown thunder in jail.”

Yeah, he boasted. Boasting is OK if 1. It’s funny; and 2. You have something to boast about. Or, to put it the way Ali (unless it was Dizzy Dean or Bear Bryant — scholars differ) did: “It ain’t braggin’ if you done it.”

This is what Trump and his howling mob of pissed-off white folks can’t grasp. Trump ain’t done it. He’s not funny. And he’ll never understand what Ali meant when he said: “I am America. I am the part you won’t recognize. But get used to me. Black, confident, cocky; my name, not yours; my religion, not yours; my goals, my own; get used to me.”

Diane Roberts is the author of “Tribal: College Football and the Secret Heart of America.” She teaches at Florida State University.

previousFlorida A&M president could be forced out by next year

nextFlorida's bear hunt foes gear up for new round of protests