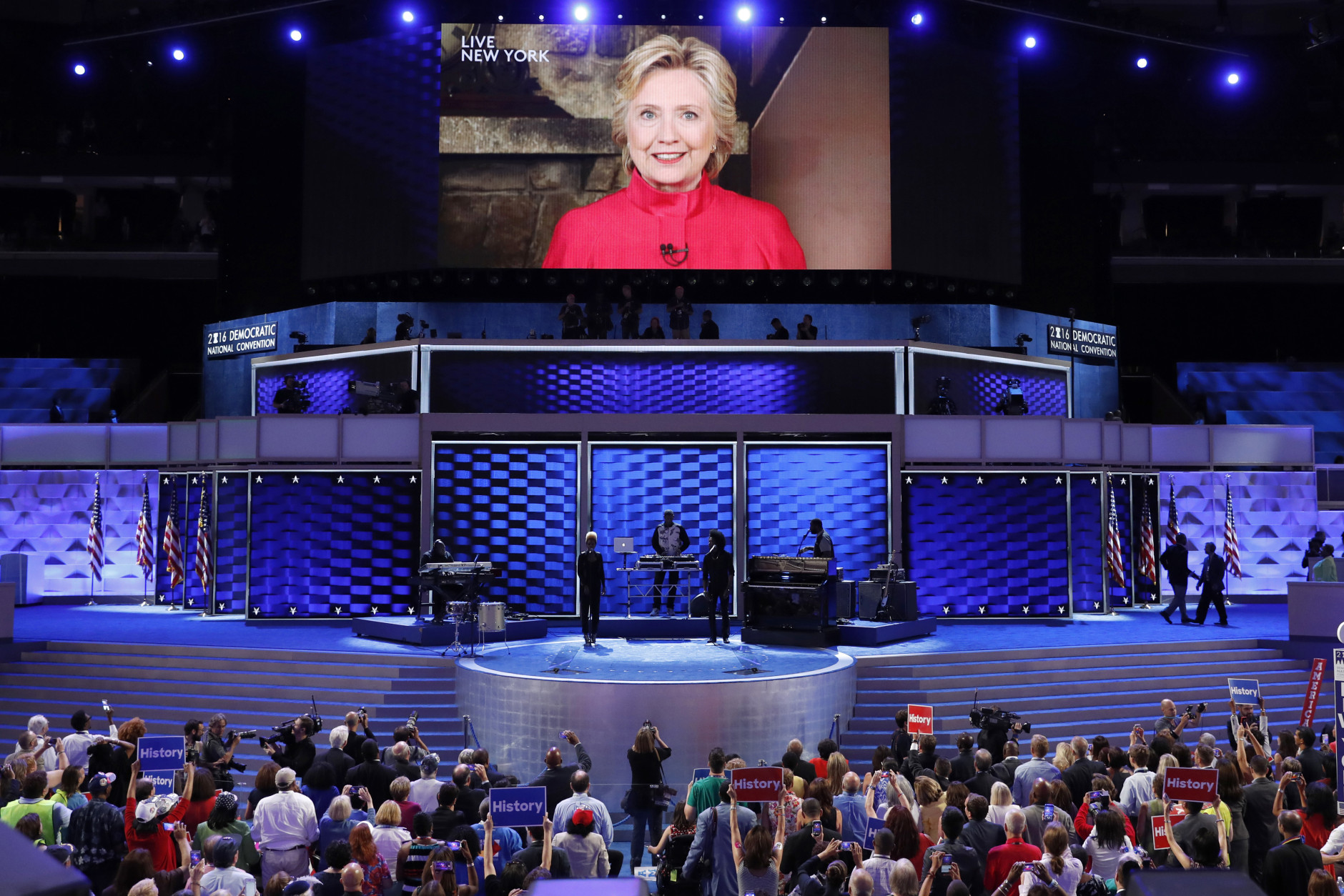 It was long ago and far away when Barack Obama snippily remarked, “You’re likable enough, Hillary.” It’s a lovefest now.

Hillary Clinton formally captured the Democratic nomination and declared the glass ceiling keeping women from the presidency cracked and nearly shattered. Her husband, ex-President Bill Clinton closed the historic night with an expansive and passionate testimonial, offering a deeply personal — though sanitized — account of their relationship. It was a policy-driven ode to the “best darn change-maker I have ever met.”

Tonight, the current president is joining her party — for it is her party now — in making the case to the nation for electing the former first lady, senator and secretary of state as the first woman to occupy the Oval Office.

The Democrats’ standard-bearer at long last, Hillary Clinton was affirmed as the party’s nominee Tuesday night at a convention that appeared to be finding its stride after a disruptive opening at the hands of distraught Bernie Sanders supporters. The ritualistic roll call of the states that sealed her nomination proceeded without trouble inside the hall and Sanders himself stepped up in the name of unity to ask that her nomination be approved by acclamation.

The unhappiest among his followers filed out, occupied a media tent and staged a sit-in, some with tape on their mouths to signify their silencing by the party. “This was a four-day Hillary party, and we weren’t welcome,” said Liz Maratea, 31, of New Jersey. “We were treated like lepers.”

Clinton’s landmark achievement saturated the roll call with emotion and symbols of women’s long struggle to break through political barriers. Holding a sign saying “Centenarian for Hillary,” 102-year-old Jerry Emmett of Prescott, Arizona, cast her state delegation’s vote. She was born before women won the right to vote in 1920, and remembered her mother casting a ballot for the first time.

Bear Atwood, 56, a Terry, Mississippi, civil rights attorney and at-large delegate, was moved to tears when Clinton became the nominee. “I’ve been working in women’s rights for my whole adult life,” she said. “This is the culmination of a career and a personal life.”

Said Clinton, in a surprise appearance on video at night’s end: “We just put the biggest crack in that glass ceiling yet.” The crowd roared.

Eight years after the bitter primary battle that Obama won, the president and his ex-rival are engaged in a baton-passing partnership: Clinton presenting herself as the protector of his legacy; Obama seeing the election in November as an affirmation of his course as president, if she wins.

As polished an orator as he is, he’s got a tough act to follow, after a memorable speech from his wife, Michelle. Her passionate pitch for Clinton on opening night won praise even from Donald Trump, who turned the other cheek for once and ignored her digs. “Excellent,” he said of her delivery. “I thought she did a very good job.”

Although the convention made clear progress in sublimating its divisions, Clinton remains a divisive and largely unpopular figure for the country, as is Trump. Polling has consistently found a lack of trust in Clinton, exacerbated by remaining questions about her emails as secretary of state and no doubt by the years of intrigue surrounding the ex-president and herself.

The convention’s second night was devoted to reintroducing Clinton to voters, as speakers highlighted issues she has championed for years, like health care and advocacy for children and families.

The portrait was missing some strokes. “Hunger Games” actress Elizabeth Banks and other speakers praised Clinton for focusing her early law career on children’s causes; left unsaid was that she also joined the Rose law firm in Arkansas, which worked for Tyson Foods, Wal-Mart and several brokerage houses and had a part in the Whitewater real-estate scandal that dogged the Clintons for years.

Bill Clinton traced the couple’s love story chapter and verse, starting from their meeting in a library and proceeding through his head-strong courtship and on through the years. Unsavory episodes, like his numerous dalliances with women in Arkansas and the nearly career-ending liaison with White House intern Monica Lewinsky, were omitted.

“Hillary will make us stronger together,” he said, pushing back on the Republicans’ “cartoon” version of his wife. In a subtle dig at Trump, he said the U.S., with his wife as president, would be welcoming to Muslims who love America. And, touching on the shootings of black men by police and by the killings of police officers, he envisioned a future “where nobody’s afraid to walk outside.”

Sanders, the liberal scold of the Democratic Party and a fierce competitor of Clinton in primary contests that she had been expected to breeze through early on, came to the convention as a would-be peacemaker. But he had his hands full trying to get his supporters to swing behind Clinton or even tolerate the idea of her presidential candidacy.

The morning after his rousing endorsement of Clinton at the convention, Sanders himself was booed as he arrived for a breakfast with California delegates Tuesday.

“It is easy to boo,” Sanders said in admonishing his supporters. “But it is harder to look your kids in the face, who would be living under a Donald Trump presidency.”