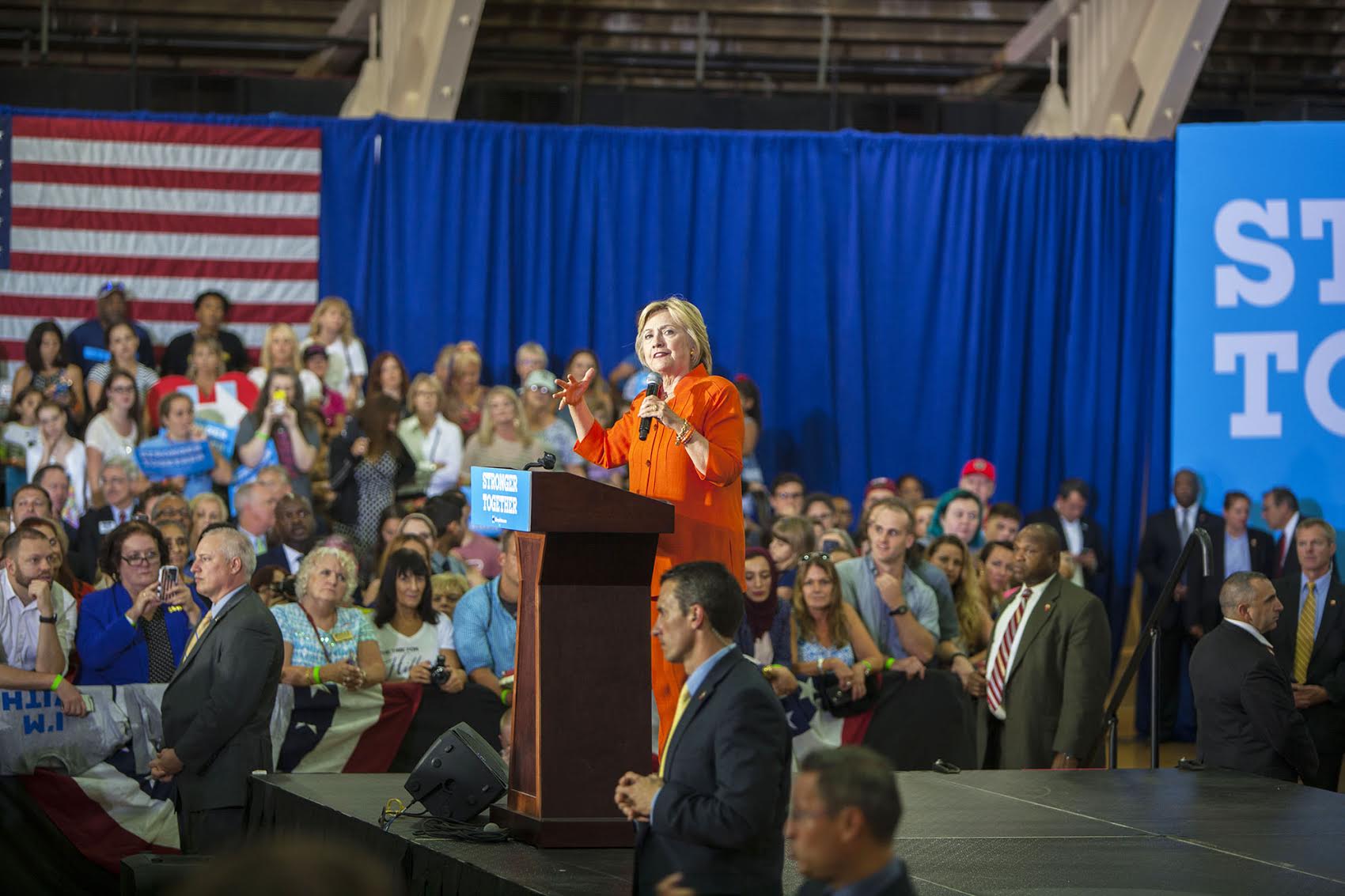 Hillary Clinton painted an optimistic future about the American economy Monday afternoon in St. Petersburg, celebrating small businesses by first visiting a local brewery and then saying what she would do to help them and the rest of the country at a speech at the Coliseum.

The Democratic presidential nominee’s first stop was at 3 Daughters Brewing in South St. Pete, where she praised the owners, Mike and Leigh Harting, for taking the risk of starting up their own company a few years ago.

“They said to me ‘what could you do to cut the red tape — to streamline a lot of the processes that we have to go through?’ and I said I’m going to work on that because in America, if you can dream it you ought to be able to build it!” Clinton said, sounding almost like the GOP at the Tampa RNC in 2012, where the theme one evening was “We built it.”

Clinton said that most of the jobs in the future U.S. will come from small businesses, adding that a problem for young people in particular in starting up a business is the huge debt they incurred from student loans. She then mentioned her student loan forgiveness plan that includes a three-month moratorium on repayment, additional refinancing options, expanded income-based repayment plans, employer assistance programs, and deferment for entrepreneurs.

Clinton is expected to give a major speech on the economy later this week, so she didn’t spend too much time talking about her own plans Monday, though she said her plan would create 10 million jobs in the first four years, an estimate made by Moody’s Analytics economist Mark Zandi (who has contributed to Clinton’s campaign). Instead, she gave a healthy dismissal of Donald Trump’s economic plans, some of which he unveiled in a speech in Detroit earlier in the day.

In it, the GOP presidential candidate unveiled a new plan to change the country’s tax system. It has just three tax brackets, would limit taxes on all forms of business income to 15 percent, would end the estate tax, and would “exclude childcare expenses from taxation.”

Clinton was not impressed, saying Trump and his economic advisers wanted to make an “old tired idea seem new” by giving large tax breaks to corporations and the wealthy.”He wants to roll back regulations on Wall Street,” she told the crowd in St. Pete. “He wants to eliminate the Consumer Financial Protection Bureau, which will save millions of dollars for Americans. He wants to basically just repackage trickle-down economics.” She added that his plan doesn’t help the vast majority of Americans, but does help those at the top.

“Well, we’re going to turn that upside down! We’re going to make the wealthy pay their fair share in taxes,” she shouted, as the crowd cheered.

In the next sentence, Clinton added that she was not going to raise taxes on the middle class, but definitely would on the wealthy. She needed to say that, because Trump has falsely released a video saying that she would do so.

The former New York senator and secretary of state also celebrated a green economy that will feature more people working in alternative energy, not what’ happening right now in Florida, as she pounced on Rick Scott.

“You’ve got a state like Iowa that gets one-third of its electricity from wind, and you’ve got states like New Jersey and Massachusetts that are really investing in solar energy,” she said, before pausing. “And you’ve got Florida.”

She blasted Scott for the report that his Department of Environmental Protection head had issued an edict forbidding the words “climate change” or “global warming” to be used two years ago. “We’ve got to stand against the deniers. We’ve got to say, “Hey, there’ s not a problem we can’t solve in America when we put our minds to it!”

Those in attendance are confident about a Clinton victory in November, said they think it could be an electoral blowout. But they also fear overconfidence.

“It’s going to be a landslide,” said St. Petersburg resident Jim Donelon. “I think he’s going to end up worse than Barry Goldwater in 1964.”

“I don’t want to be too complacent  but I believe that Hillary’s going to win by a landslide,” echoed Doug Chenneville from St. Pete. “It’s looking very good, but I showed up today because I don’t want to get complacent.”

“Voters in Pinellas County are moderate, they’re thoughtful, and they take it very seriously,” said Long in evaluating which presidential candidate would take Pinellas. “This is not a joke. It’s really serious business and I’m pretty confident that she will prevail.”

Apollo Beach resident Teri Fitzgerald is former Republican who switched parties in 2008. She says she had been drifting away from the GOP for years and Clinton’s campaign in ’08 persuaded her to vote for Barack Obama. Her top issues are Social Security and the economy, but she said she has been concerned about allowing too many Syrian refugees into the country, though not so much anymore.

“That’s been my problem to get over the hump, but after her convention speech, it made me feel ashamed, and I actually think differently now,” said Fitzgerald.

Towards the end of her address, Clinton acknowledged empathy with Americans frustrated about their current plight in this economy, acknowledging that while the GOP convention in Cleveland may have been too pessimistic, there are Americans out there struggling.

“I understand that there are lots of people in our country that are really disappointed, fearful, and even angry. I get that. That Great Recession was a terrible experience,” she said, referring to the millions of jobs, homes and wealth that was lost.

“It was terrible and I know that people are worried about whether they and their kids can have the kind of future that we expect here in America,”she said, as the crowd quieted. “I’m here to tell you yes, we can and we will, because we’re stronger together,” using one of the themes of her campaign.

After the address, Clinton moved on to Kissimmee, where she will give another speech Monday night. She will also visit health care workers dealing with Zika crises Tuesday in Miami.