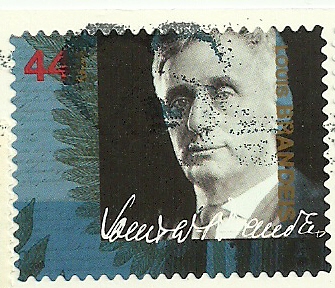 In a post-truth world, beset by fake news, in which people segregate into information bubbles impenetrable to unfriendly ideas, constitutional scholar Jeffrey Rosen finds inspiration in Louis Brandeis, the late justice of the U.S. Supreme Court.

Addressing students Thursday at the Florida State University College of Law, Rosen, president and CEO of the National Constitution Center, called Brandeis “the greatest prophet of free speech and privacy” of the 20th Century.

“Brandeis has faith that people, self-governing citizens, will take the time to educate themselves and develop their faculties of reason, and deliberate together and converge on some sort of common understanding of the facts and the truth,” he said.

Rosen was in Tallahassee to present the keynote address to the Florida Supreme Court Historical Society’s annual dinner, but dropped by to chat with the students first.

This isn’t the first time technology has unsettled the old way of doing things, Rosen reminded the students.

“James Madison, at the end of his life, wondered whether the American experiment would survive. He feared that it would not without the sustenance of public reason,” Rosen said.

“And he examined new technologies — it was the broadside newspaper — that might unite farmers and manufacturers and elites to try to engage in public reason, and have reasoned compromise and deliberation,” he said.

“We all know … that we’re in an age when facts are contested and people are no longer able to agree on what the truth is. That poses a serious threat to Madison’s belief that, without reason, democracy would atrophy.”

Today it’s not only government that patrols speech.

“In this age of social media, who has the most power over free speech? Who has more power than any king, president, or Supreme Court justice?” Rosen asked.

“Absolutely,” Rosen said. Companies like Facebook and Google employ teams of lawyers to decide whether to suppress content at the demand of overseas leaders and other scolds, even when the content is legal under the First Amendment.

Rosen isn’t comforted by moves to submit these decisions to algorithms. “These are very subtle, contextual judgments, of the kind that Supreme Court judges make all the time. The idea that an algorithm can distinguish between political speech and child pornography is not convincing.”

He pointed to differing opinions on free speech around the world. Europe, for example, bans hate speech directed at, say, religious groups, that would be protected in the United States.

Europe also protects an individual right to be forgotten, meaning that even truthful information about people can be forced off the Internet on pain of huge fines.

Rosen acknowledged: “I don’t have a solution about how we can resurrect public reason.”

But he said the Constitution Center is doing its part through a national commission to debate what to make of an imperial presidency that gives both liberals and conservatives pause; a Congress that has ceded its authority to the White House; politically polarized courts; and news media that are “segregating us into filter bubbles and echo chambers.”

The founders “believed that freedom to think as you will and to speak as you think are means indispensable to the discovery and spread of political truth; that, without free speech and assembly, discussion would be futile,” Brandeis wrote.

“That, with them, discussion affords ordinarily adequate protection against the dissemination of noxious doctrine; that the greatest menace to freedom is an inert people; that public discussion is a political duty, and that this should be a fundamental principle of the American government.”

As a lawyer, in a 1908 case involving maximum hour laws for women, “Brandeis collects all these facts — industrial reports and medical reports — to show that women who work in dangerous industries need protection,” Rosen said.

So powerful was the weight of those facts in defense of a position that Thurgood Marshall reread Brandeis’ brief before arguing Brown v. Board of Education. It inspired Ruth Bader Ginsberg when arguing for women’s rights during the 1970s, Rosen said.

“He’s very keen on the idea of using our leisure time to educate ourselves about facts,” and prepare ourselves for the duties of citizenship, Rosen said.

“Is this too idealistic in this post-truth society?” Rosen wondered — one marked by Twitter mobs and social media distractions?

“Speaking for myself, after a long day it may be more fun to watch cat videos than read industrial reports,” he said. “But Brandeis thinks it’s important. And it is important. Because we can’t be fully engaged citizens unless we do this.”

Juries are another example. “People are locked in a room together and forced to treat each other with respect and hear each other out and reach some kind of unanimous verdict,” he said.

“Brandeis inspires me, with all the frailties and distractions of modern life, to be a better citizen. To try to read and think more, and eat and drink a little less, and basically just force myself to use all my faculties as much as possible. And you can do that too.”

How does one separate fake news from real?

Brandeis would be suspicious of efforts to suppress even erroneous information, Rosen said.

“The idea of a central regulatory body, whether its Facebook and Google or the government, officially deciding what it true … is the antithesis of the Jeffersonian ideal,” he said.

“My instinct is that it all has to be admitted into the public square,” he said. “The best remedy for evil speech is good speech.”