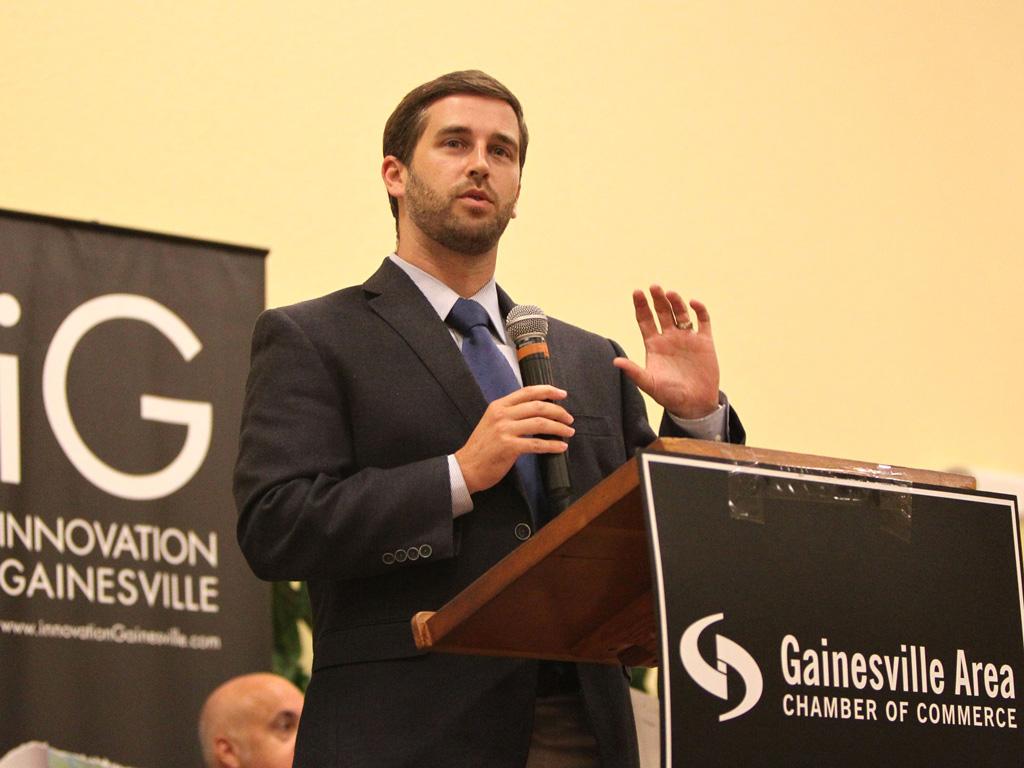 A new era is starting for the Orlando’s chamber of commerce and Economic Development Commission – fully merged now and awaiting Tim Giuliani as the new leader who says the synergy of the merger should make it more holistic and nimble in promoting business.

The new commerce organization was created from the merger of the Orlando Economic Development Commission and the Central Florida Partnership, which includes the Orlando Regional Chamber of Commerce. It’ll get its new name about the same time Giuliani starts.

Giuliani, 35, will start in mid-March.

Giuliani said the merger creates the advantage of bringing the two missions – the interests of the existing business community, and the need to reach out to attract new business, together in one plan. He said it also brings more resources and capabilities to efforts to address emerging opportunities or issues.

It’s a similar model to what Giuliani has run in Raleigh, N.C., and Gainesville. The Saint Augustine native who received his bachelor’s degree from Florida State and MBA from the University of Florida became president and chief executive of the Gainesville Area Chamber of Commerce and Council for Economic Outreach, and then took on a similar role at the Greater Raleigh’s Chamber of Commerce, which includes Raleigh’s economic development program.

“You get alignment from the business leadership in the community. So everyone is focused on the same sheet of music. everyone is in the room together. That’s a huge advantage instead of having two different areas not looking at the full picture. This way the full economic picture is on the table,” Giuliani said. “And from a staff perspective and organizational perspective, you have your sales team talking to your product-development team.”

In Raleigh, Giuliani was the voice for business in one of the country’s most robust and dynamic high-tech corridors, the Research Triangle created through the shared efforts of North Carolina State in Raleigh, University of North Carolina in Chapel Hill, and Duke University in Durham. Raleigh also is the state capital.

So he knows what it’s like to oversee high-tech commerce.

With Duke, NC State and North Carolina, the universities have been gearing their programs, research and commercialization toward the Research Triangle “for decades,” Giuliani said.

The anchor in Central Florida would be the University of Central Florida, which bills itself as America’s partnership university and has been digging deep to establish centers of excellence particularly in lasers and optics and simulation and modeling software, while partnering to try to develop emerging centers in medical research and sensors technologies. Giuliani said he likes what he knows about UCF, and notes UF and other schools also have investments in the region’s tech efforts.

On the other hand, UCF remains a relative modest player in research money, far below what the Research Triangle Universities do. In 2015 UCF conducted about $215 million worth of research, while Duke and North Carolina each did about $1 billion, and NC State did about a half-billion, according to the National Science Foundation. UF and the University of South Florida, which are part of the I-4 research consortium with UCF, did about $740 million and $485 million respectively.

“The thing that enthuses me the most is how much of a priority  this is for UCF, how much pride they take in the patents and commercialization of products,” Giuliani said. “It’s that drive that will continue to get them further and further up the list in research funding.”

“I think the business community can certainly be a champion and advocate for the research institutions so they don’t have to carry all of that water themselves,” he said.

Those high-tech businesses also put high value in quality of life issue, and the economic fundamentals, he said. Is housing affordable? Is there enough to do on the weekends? Are there other things for the employees to do if they chose to leave the company? Is there an eco-system to support growth?

Sure, Orlando has theme parks and beaches nearby, and a top, international airport with direct flights to almost everywhere. But he views the emerging performing arts through the Dr. Phillips Center, transit and other infrastructure, and other developments such as the rising Lake Nona and the planned Creative Village, as completing the picture for attracting 21st century business.

“I know everyone talks about quality of life. I think it’s coming into sharper forces as the economy is driven more and more by the workforce, he said.