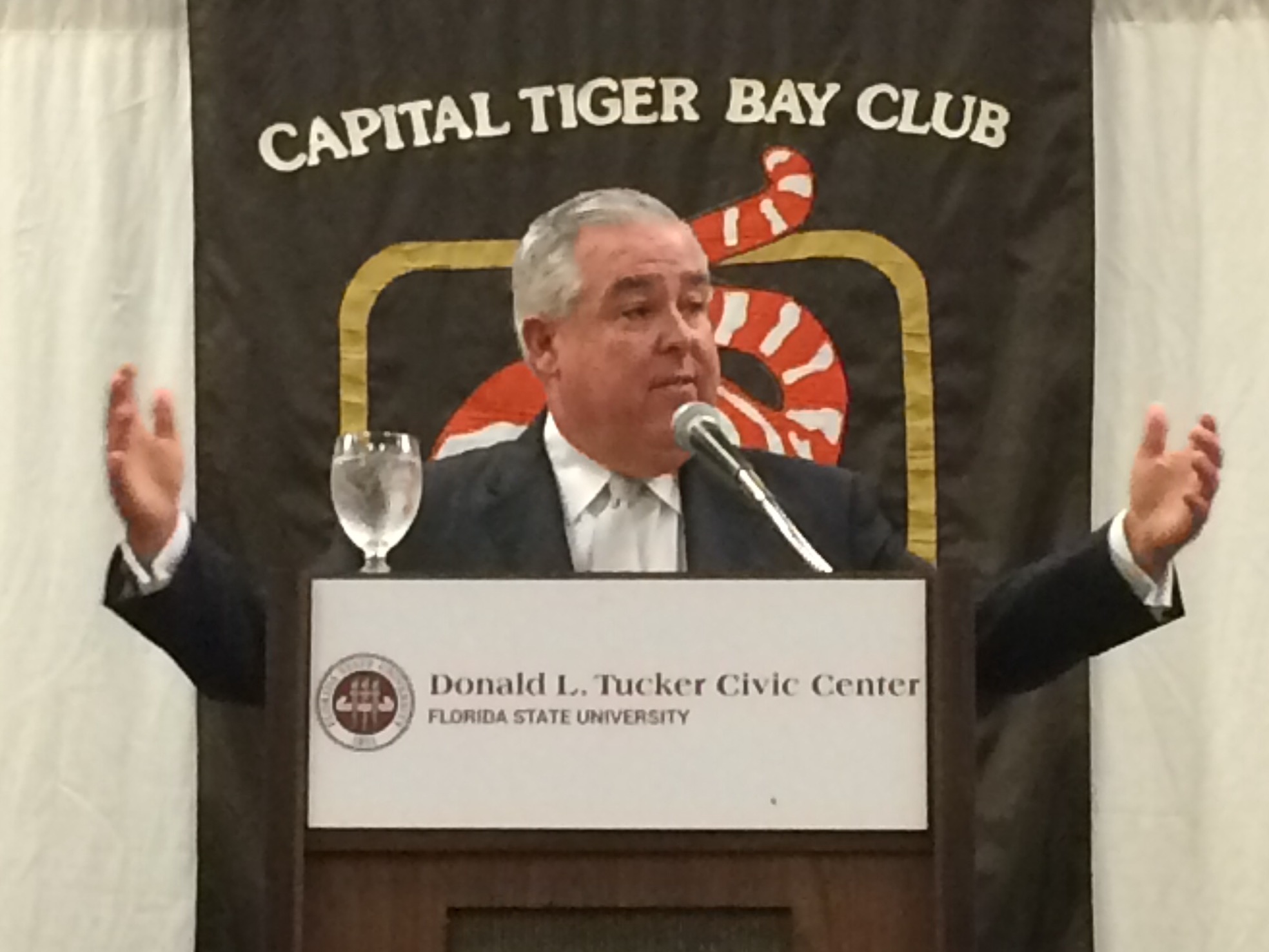 Orlando trial lawyer and possible gubernatorial candidate John Morgan was a study in highs and lows Thursday as he spoke to Tallahassee’s Capital Tiger Bay Club.

In wide-ranging remarks, Morgan – who said he still hasn’t decided on a 2018 run – pinballed between self-deprecating fat jokes and curse-word spiked anecdotes, and more serious musings about social good and the nature of God.

Indeed, it seemed the only thing the 60-year-old Morgan did not touch on was the perfect ratio of Jack to Coke.

Morgan, a champion of Florida’s medical cannabis movement whose face is on ubiquitous billboards, TV ads and bus placards across the state, announced he was thinking about a run for governor late last year. He hasn’t even decided under which party.

Those expecting surprises from the maverick counselor were disappointed: Morgan repeated many themes he’s sounded recently, including the need to raise the minimum wage, ending the war on drugs and questioning what he called a “war on teachers.”

“Do you know what they make?” he asked. “They don’t make (scratch). And they work like crazy. But, all of a sudden, they’re the enemy?”

“All these people who want charter schools are rich people who had a silver spoon stuck up their (posterior) so far their whole lives that their eyes are bloodshot,” he said.

“What we saw in the last election is that America is afraid,” he told an audience of several hundred. “People don’t make enough money to survive … People are losing hope; they’re losing the American Dream. It’s like they’re in quicksand and there’s no bottom.”

Morgan also called concerns over illegal immigration “the biggest hoax that’s ever been played on America.”

“You can build a wall. That ain’t the problem,” he said. “These immigrants are here to stay. If we wanted to get rid of them, we could do it today. You make it a third-degree felony to hire one and a $50,000 fine to keep one.

“But that’s never gonna happen, because we want this free, slave-like labor … We don’t want those people to leave. We like paying people off the books … to do the jobs Americans just won’t do,” he said.

With all his concerns, however, Morgan said his daughter recently told him he needs to “focus more on gratitude.”

“All we do is focus on what’s wrong,” he said. “Teachers are bad, crime is bad, illegal immigrants are bad. What’s good? Well, there’s a lot of good.”

The Dalai Lama once told him the secret to life is kindness, he added. “Where is all that kindness? … I think what this world needs is to focus on right more than wrong.”

Fred Conrad, a conservative Tallahassee lawyer and former prosecutor, said he didn’t “agree with everything he said, but I think he’s a tremendous speaker. And it is easy to see why he is a successful trial lawyer.”

Mary Pankowski, another former prosecutor now in private practice, had asked Morgan at the end of his remarks to support Democrat Gwen Graham if he decides not to run in 2018.

“I like his philosophy,” said Pankowski, a lifelong Democrat, referring to Morgan’s call to decriminalize minor drug offenses. “I thought his ideas were refreshing.”

nextAdam Putnam to business leaders: 'Florida has come too far to turn back now'