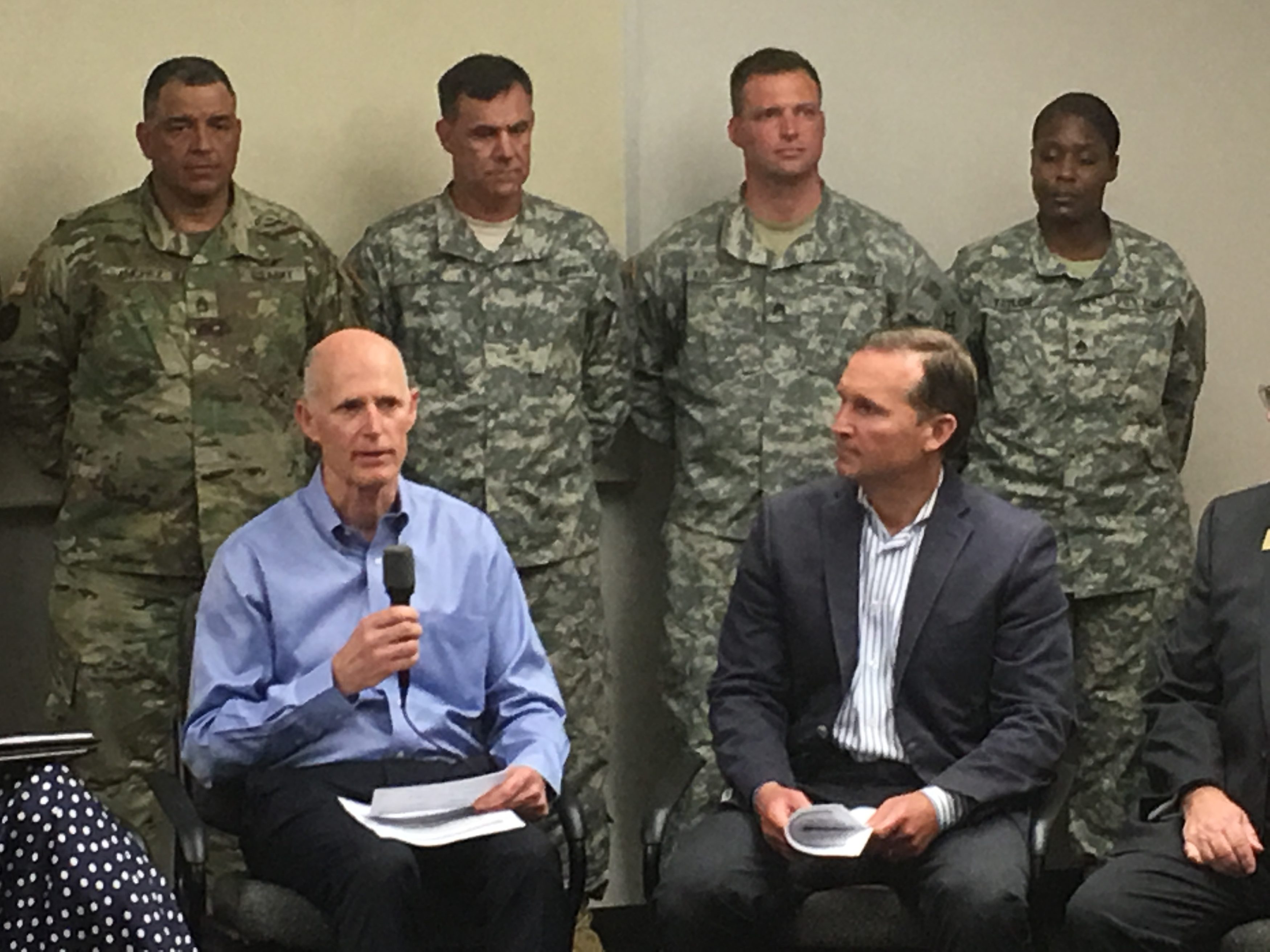 For the second time in a fortnight, Gov. Rick Scott came to Jacksonville on Wednesday to outline the importance of Enterprise Florida.

This time, he discussed the Florida Defense Alliance, which has helped bring in grants within the last year to Clay County for academic enrichment and land buffering near Camp Blanding, and Duval via Defense Reinvestment Grants.

For Scott, a Navy veteran, and Curry, the son of a Navy vet, military issues such as the Florida Defense Alliance are central to messaging — and a larger economic vision.

Scott noted Florida’s 20 military bases and three unified commands early in his remarks, denoting that the vote against the Florida Defense Alliance was part of a larger package, which included House repudiations of other incentives.

“There’s going to be BRAC again,” Scott said, citing the significance to Jacksonville.

Scott added that the programs are “fully-funded” in the Senate.

Curry lauded Scott for trying to make Florida the “most military-friendly, veteran friendly state,” adding that “there’s no place better to have this conversation than Jacksonville.”

Curry said incentives were “not a theoretical discussion for a mayor of a big city.”

“We use incentives here in Jacksonville … in a very accountable way that respects the taxpayers and provides return on investment,” Curry said.

Scott “measures everything,” Curry said, citing his long, pre-mayoral history with Scott which dates back to the mayor’s time atop Florida’s Republican Party.

Curry had spoken of incentives before, though his words have not gotten much traction in the local media on this subject.

In February, he told us that “incentives are important to us. They’re used in a way that respects the taxpayers. Without the state funding,” Curry said, “we would have had trouble closing some of the big deals that we closed.”

“They’re talking about reforms over there [in Tallahassee],” Curry said. “I can tell you how we do business locally. We use our tax dollars in a way that’s responsible to taxpayers, and we’ve been able to use the state incentives the same way. I hope they can figure out a way to continue to give us the opportunity to have access to state incentives.”

After the event, the governor and the mayor discussed potential political repercussions for local House members who voted against incentives.

Scott noted that he will be in “cities across the state, almost every day, talking about the importance of jobs.”

“At the end of the Session, they’ll pass a budget at some point, and I’ll review the budget and make sure the dollars are spent well,” Scott said.

Curry noted that his relationship with the governor wasn’t a “purely political relationship, but was borne out of mutual respect between two people who want to do the right thing for the people.”

“Members of the Duval Delegation — we agree on a lot of issues, we agree on most issues. We disagree on this issue. I think that this is a big disagreement, an important one, that can have a negative impact on the people of Jacksonville,” Curry noted.

There is a larger issue here. Curry ran on jobs, and given that the current evisceration of CSX goes hand-in-hand with a decrease in job creation locally, there is a possibility that the job trend and the legislators’ recalcitrance could leave the mayor politically vulnerable.

“A.G., you know me well enough to know that I don’t worry about political vulnerabilities,” the mayor said.