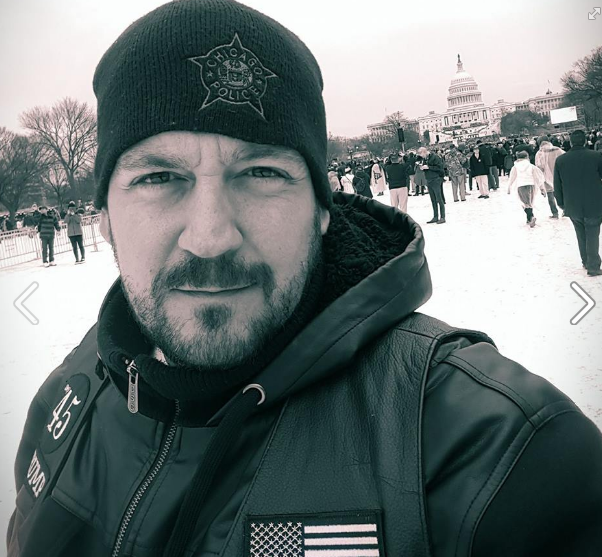 Until Friday, most people outside the circles of regular protesters and Duval County Republican Party activists didn’t know the name “Gary Snow.”

Bet they know it now.

Snow, who recently came to Jacksonville by way of Chicago, has a unique shtick.

Under the aegis of supporting President Donald Trump, Snow makes a habit of showing up at protest events of the “Indivisible” sort, waving a giant Trump flag and bellowing into a megaphone.

The effect is of a cartoonish heel, a wrestling character from the 20th Century.

Snow is real performance art: an attempt to lampoon and discredit the energy of left-liberal protests.

Nonetheless, Snow is also a big guy — big enough to appear physically imposing to smaller people, for sure.

Throughout his time in Jacksonville, Snow was able to make it work, with successful provocation outside a Bill Clinton event in Jacksonville in October, effective disruption of a protest of Rep. John Rutherford, as well as other such events.

Ironically, one of his earliest provocations was an August protest put forth by the Jacksonville Progressive Coalition.

Ironic as it may have been, it was a JPC protest that went sideways Friday night, where protesters were physically subjugated then arrested — something now being reported by the London Daily Mail.

What makes this particular protest in Hemming Park notable: the police approach that seemed more akin to the laissez-faire handling of squabbles between regulars convening in the plaza, than simply managing a protest.

Permitted to romp in and through the protest, Snow stood shoulder to shoulder with speakers, waving a Trump flag and provoking them.

At the 1:47 mark of a video posted on the Daily Mail page, it appears Snow nudged a protester into a police officer, seemingly a catalyst for the resulting chaos.

[NOTE: Snow denies having nudged anyone.]

Snow’s Facebook page indicates that whatever happened (certainly the “Hemming Park 5” will get their days in court, both for these criminal actions and potential civil actions), he accomplished what he set out to do.

“They said I was a ‘lone Trump supporter’ at the beginning. …. They said that my support for our President was irrelevant. …. They said I would never matter. …….. SEEMS I GOT THEIR ATTENTION NOW!!!!!!”

“I don’t have sympathy for somebody when they literally stand up in front of police officers in a public place and scream in a megaphone ‘[Expletive Deleted] THE POLICE.'”

For what it’s worth, this protest is in the books. There will be a number of court hearings that will seem less urgent with every passing news cycle after Friday night’s conflagration.

But the “Snow Effect” will change future protests.

For one thing, the JSO will to have to figure out crowd control — something that has been loose during events which Snow has attended, to the point that many on the left are suspicious as to why.

Another thing, the left needs to begin getting serious about its own security.

A buffer of people around speakers could ensure individuals like Snow couldn’t disrupt proceedings time and again. If they did that, what happened Friday may have been discouraged.

I write this as someone who witnessed a lot of protests, especially of American foreign wars. And as someone with no illusions about how much such protests actually accomplish.

A few dozen people chanting in Hemming Park aren’t in a position to affect American military adventurism — especially when even avatars of the corporate-media left, such as Rachel Maddow, covered those strikes with all the enthusiasm of the opening segment on First Coast Living.

The protest means nothing in terms of changing the minds of anyone in a position to make policy. However, what went on at this protest presages a new era of protest in Jacksonville, one in which law enforcement and State Attorney Melissa Nelson will deal with the chasm between what those on the left want and what a center-right political culture can actually provide.

Politicians in Northeast Florida talk about public safety much more than they do personal liberties, and that will necessarily be the default reaction to this and future protests ending in booking sheets and arrest reports.

An irony attendant to all of this: Trump rallies last summer were notable for the inevitable “throw ’em out” riff targeted toward protesters in the crowd.

As he was when he launched his Presidential campaign, Trump was prescient in taking that approach to protest.

He knew that the bare-knuckled politics that he would come to embrace necessarily would find analogues everywhere else.

Thus, he controlled rally spaces as if they were Trump casinos — prioritizing crowd control above other concerns.

Again, they will encounter such provocation.

If so, what will their strategy be next time?

previousMartin Dyckman: Who needs strong, independent courts? We do.

nextAndrew Gillum tells college Democrats: 'We don't have to run from who we are'